The love I feel for my dog Maggie Mae

And the love Maggie Mae has for me, her person.

My protector, my defender,

Always by my side.

I can’t imagine my life without her.

No one will ever love you like your dog. 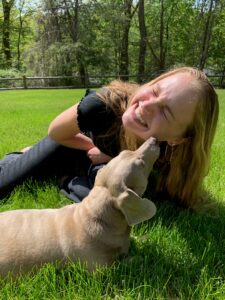 Wet weather didn’t put a damper on the first ever Halloween dog costume contest at the Chappaqua Farmers Market on Saturday, November 3rd. The event was originally scheduled for the Saturday prior to Halloween but it was raining cats and dogs (ha!) that day so it was rescheduled. The event was sponsored by A New Chance Animal Rescue. The Bedford Hills-based non-profit operates on a foster home model, with the strong belief that boarding and shelters are not replacements for experiencing home life that prepares a dog for successful adoption. A New Chance Animal Rescue relies solely on approved foster homes to house and care for all dogs.

The costumed contestants and their owners marched along the booths of the Farmers Market much to the delight of the vendors and shoppers. Lou, the UPS Dog won 1st Place, Arlo the Hot Dog came in 2nd and the adorable Bumble Bee, Gracie took 3rd Place! Each contestant got yummy doggie treats and the lucky winners received gifts from Wags and Whiskers, Aardvark Pet Supplies and Pets A Go Go, plus of course bragging rights! Proceeds from the event were donated to A New Chance Animal Rescue. 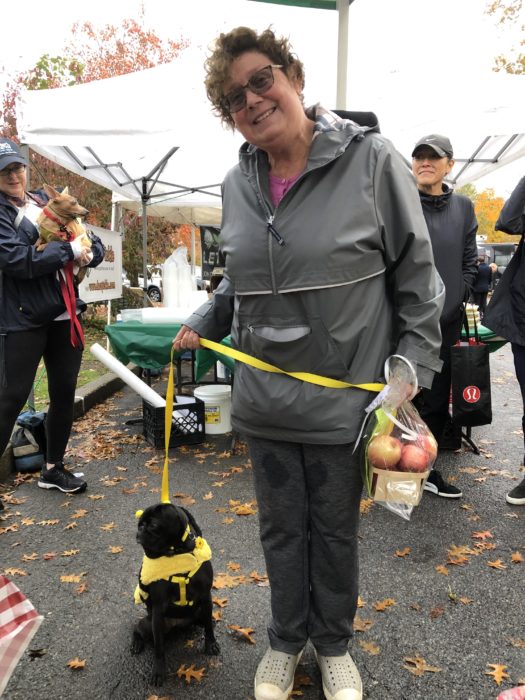 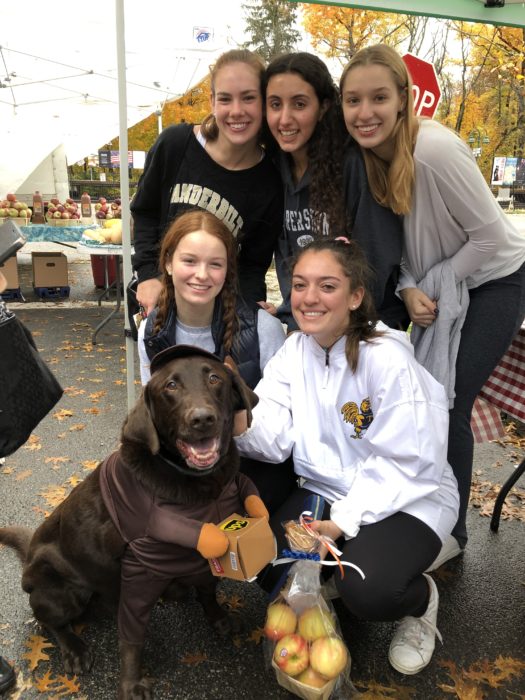 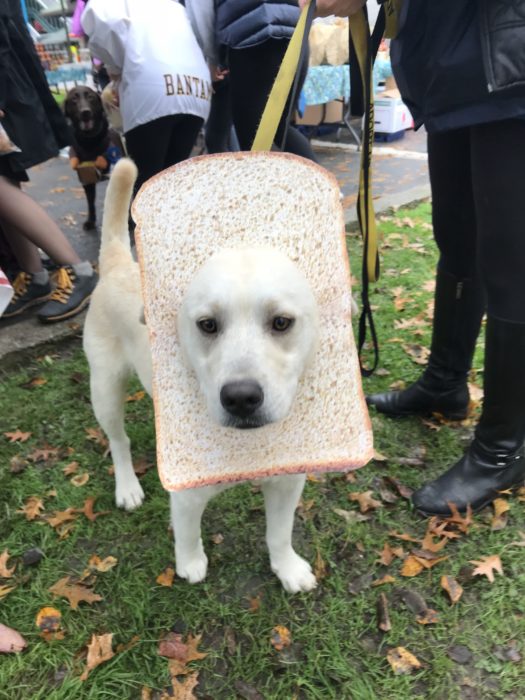 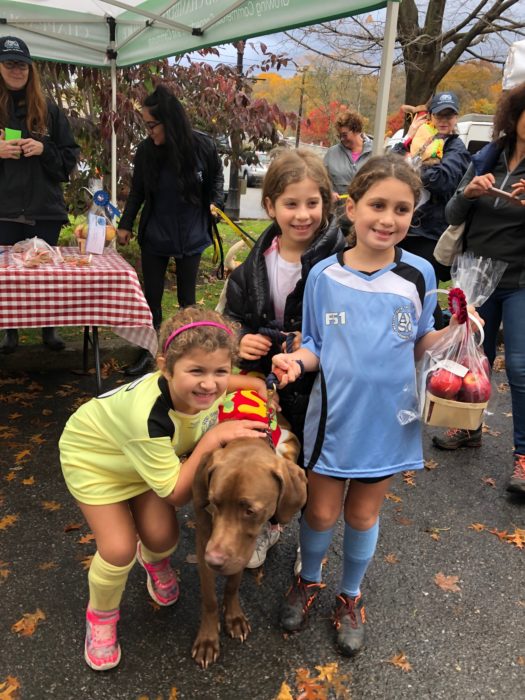 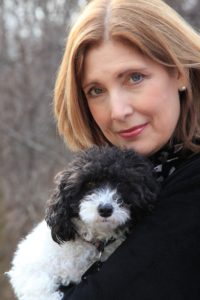 I never thought I could love an animal as much as I love my Maggie Mae. She is, without a doubt, my best friend and my biggest fan. She will follow me anywhere, is totally devoted to me–even when I scold her. Maggie Mae loves me unconditionally. She’s a black and white Parti-Toy Poodle and the joy of my life.

When I first saw her, her outgoing personality attracted me, and I knew right away that she was mine.  But maybe it was the other way around and she chose me. Nearly eleven years ago, when she came to live with me, she was three months old and weighed only three pounds.

I can’t imagine my life without her. She’s a wonderful companion, and she makes me laugh. She can be sound asleep, but if the phone rings and I answer, she is by my side in a minute so I will play with her. When I say to her, “You’re the best girl I know,” she always rewards me with a kiss.

They say that dogs are man’s best friend, and they’re not kidding. When a fly is buzzing around the house, she’s right there to alert me and to guard me. She alerts me when I have accidentally left the front door ajar or if there’s something in the wrong place. And then there is Maggie Mae neighborhood watchdog. She can spot a car blocks away and frequently knows who’s in it.

As a perennial single person, I have lived alone for most of my adult life, and it is easy for a single person to become self-indulgent. Having to think about the well-being and care of another were valuable changes for me. That’s one reason I’m so grateful for Maggie Mae’s presence in my life. She also keeps me healthy. No matter what the weather, I am outside with Maggie Mae at least three times a day. We take long walks that are good for both of us–and not just physically. I often get good ideas as we walk. One was her Maggie Mae Pup Reporter column that many of you read in this magazine for years. I’m also grateful because she has made my life more interesting. I learned to write from a dog’s point of view.

As many of you readers know, Maggie Mae is “personable” and well-known by merchants in town. She has high self-esteem, which shows in the way she carries herself and walks down our streets and into the shops as if she owned Chappaqua. Other people notice her, and I could not have been more proud when Sophie Mendelson included her in the Chappaqua Children’s Book Festival mural in the center of town.

Maggie Mae loves to ride in the car and is a great traveling companion who’s always happy with whatever we do. Since she was a puppy, she’s been a regular guest at the Red Lion Inn and has many fans in Stockbridge and the Berkshires.

As much as Maggie Mae loves to snuggle up next to me, especially when I am doing something that doesn’t include her, she is an independent dog who often likes to be alone. She’ll go into her crate, lie on her bed or find a square of sunlight on the carpet just to chill.

My heart is bigger than I ever thought. I love Maggie Mae’s little kisses, how she curls up at my feet to give me a hug. How she puts her head under my hand so I can pet her. I love her wagging tail and how she waits for me at the door.

So little can make her happy and that is a lesson we can all learn.

And as I was writing this, she came up to me, leaned in, pushed my pad and pen away and climbed on my lap. I can’t imagine life without Maggie Mae. She’s my girl and I love her dearly. 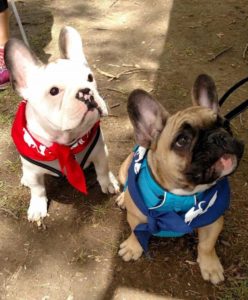 Join us for this fun-filled family fundraiser on Saturday, May 5th at FDR State Park in Yorktown Heights from 10 a.m.-2 p.m.

Walker Registration in now open! Sign-up to be a Walker and you can choose to create an online fundraising page to gather pledges in support of your walk or form a team. 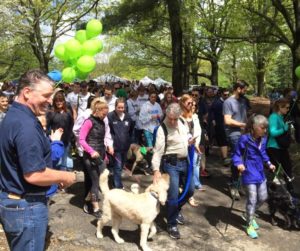 Although cats can’t attend this event, we still encourage you to join us and walk on their behalf as the funds raised from this special fundraiser supports both our canine and feline friends at the SPCA.

For further details or questions, or sponsorship opportunities, email Lisa@spca914.org