May 16th kicks off the Northern Westchester Artists Guild’s  “Art Under the Bridge” series running every third Saturday from 9:30 a.m. – 3 p.m.. May through October by the Chappaqua train station  under the bridge.

Local fine artists, painters, printmakers, ceramists,  photographers, fiber artists, sculptors, and  jewelry designers all will exhibit their work under the bridge that links the   Farmers Market and the Flea Market to the shops at lower King Street.

Shop for fresh locally grown farm goods, shop at the flea market; then stroll under the bridge and see the amazing art work also locally produced!

All work is available for purchase.

NWAG is a non profit organization, and a proud member of the Chappaqua/Millwood Chamber of Commerce.

The Northern Westchester Artisits Guild supports and encourages artists in their endeavors.

We see all forms of art as a vital expression of our voice in the community. 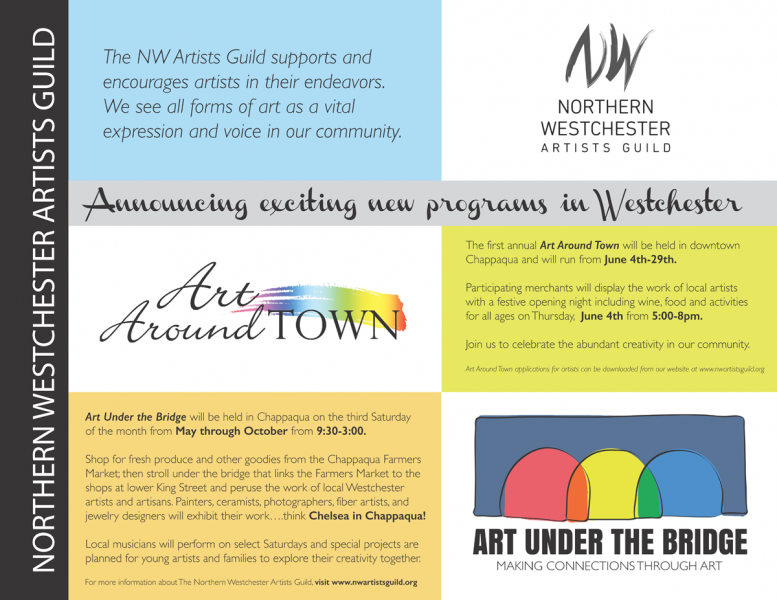 As a working artist, I have longed for a group of fellow artists in Northern Westchester with whom I can share ideas, mount exhibitions and have a support network. The life of an artist tends to entail a great deal of quiet time in order to work on one’s practice, either during a thought period or while producing. That said, artists do look to their peers

for critiques, for sharing ideas and for information and a means of outreach related to exhibiting their work. I personally like the romantic “cafe and coffee-conversations” images depicted in movies and novels which paint a picture of artists whiling away the hours together, steeped in creative conversation.

Artist’s studios, galleries and those very romantic cafes are springing up in neighborhoods in Queens and Brooklyn. These city blocks have a sense of cohesiveness and have created built-in community networks. So, five years ago, when I began to focus on my art as a full time endeavor I also wanted to create a sense of an artists’ collective. At first blush, this seemed like a monumental effort in our geographically large region comprised of small towns and hamlets. But I knew this would be important in an effort to satiate my desire to feel connected to a working community and for artistic inspiration and support.

My first step was to reach out to other guilds in the area. I began calling and emailing those I knew of to see if they would be interested in franchising or having me open a chapter in Northern Westchester. As it turns out, the model of a franchise does not work in the guild world, so I needed to take my conversation on the road, literally, to garner support.

While out walking one day last spring, I had an impromptu meeting with, now-fellow Guild member, Peg Sackler about trying to form a local organization of artists. Still not exactly sure about the specifics, we were both excited about the prospect of group, a space, an exhibition and people with whom we could bond over art. That was enough of a starting point.

I have been studying at, among other places, The Westchester Center For The Arts in White Plains. Sharing a studio with a group of artists can be simultaneously intimidating and exhilarating. I was excited to have found a group of artists with whom I could converse and from whom I could get feedback. Eventually, I connected with Patti Ettinger and Helene Ocko, and brought up the idea of a guild in Northern Westchester. To my delight, they loved the idea and encouraged me to forge ahead.

I let the idea percolate for a few more months and tossed the concept out to artists I would run into along the way. I started collecting email addresses, and finally got up the courage to send out a note to a small distribution list to test the waters. I figured if there was enough interest, we could have a meeting; if not, I would humbly send out a retraction of the idea. So the email went out with the Subject Line:New Castle Artist Guild. I was thrilled by the responses. Not only did those on the distribution list jump in with two feet, but people were forwarding my note around and strangers’ names were popping up in my inbox with requests to join.

Artists’ guilds are as old as the practice of art itself. Guilds have a rich history of uniting artists and people who love art. Guilds are usually a non-profit organization dedicated to the promotion and exhibition of its members work. Guilds serve as a resource and network for community artists of all ages and interests, and include making cultural and economic contributions to the community, connecting artists and art patrons, and acting as an arts educating center.

The inaugural meeting was September 2014. We had approximately 15 artists around my kitchen table and the energy was amazing; there was an immediate sense of communal purpose. With little structure and no formality, we began to function as a collective; tossing out ideas, suggesting new members, creating opportunities, developing ideas for marketing material and determining a dues structure. Several items where set in place immediately. Mindy Kombert-Rosenblatt suggested the more inclusive naming convention of Northern Westchester Artists Guild, NWAG.  We began calling ourselves that during the meeting, which was an acknowledgement that this entity was formed and moving forward. We enjoyed our meeting, and established that we would have meetings the first Monday of every month. It was decided that the goal of NWAG is to raise awareness and appreciation for the visual arts through exhibitions and education in Westchester.

By our second meeting, Nan Zinaman was spearheading an effort for the Guild to be represented at the Chappaqua Farmers Market. True to our creative spirit, a handful of members represented NWAG with a display of work, a book of the members’ bios and a poster created by member Carolyn Simpson which serves as our marketing platform and includes information on the artists and their websites. By the second month, our website was up and running, and we were now talking about doing a pop-up exhibition.

We christened our fledgling Guild with a pop-up show at the Chappaqua Community Center on December 7th, 2014. Peg Sackler showed up to our November meeting with a poster sized flow chart of how we would transform the community center’s main room into a Chelsea-like gallery for four hours. We arrived at 12 p.m. with a 1 p.m. scheduled opening. Twelve of our members participated and we unpacked cars, set up tables and coverings, assembled easels, spread out promotional material, and created a café. While music played and the sun shone in, our patrons began arriving at 12:50 p.m. From that moment until 4 p.m. on the nose, the house was packed. It was an absolute thrill to hear from the audience how excited they were to come out to participate in this creative community event. Almost all the exhibiting artists sold works that day, or did so following the show, and close to two dozen pieces were purchased.

We are currently 25 members strong and growing each month. Our members work in a variety of two-dimensional art forms such as painting, printmaking and drawing as well as textiles, pottery, mixed media, beadwork and jewelry. The Guild is supported in part from our members’ dues and commissions from the sale of artwork, as well as fundraising events. Our Guild is a volunteer-based collective, which helps keep our operating expenses to a minimum, and, in turn, encourages the members to participate which adds to the feeling that the organization is ours.

NWAG is currently working on an opportunity to curate monthly shows at Peter and Erin Chase’s new Chappaqua Station venue. Launching 3Q 2015, this curatorial opportunity pairs community resources with common goals of enriching our neighborhood. In addition, the Guild is working with Tara Mikolay to develop an Artists’ Walk event to take place in New Castle. The event will match Guild members with local merchants who will exhibit the artists’ work in their establishments. The Artists Walk will commence with an opening cocktail reception at the participating merchants’ stores, and the work will be on display for approximately a month. Proceeds from the sale will benefit both the Guild and local charities, which are still to be determined.

We are also very excited to have a show scheduled at the Chappaqua Public Library, which will run from November 7th 2015 through January 2nd 2016. All Guild members will be represented, and we will host an opening reception on November 7th from 2-4:30 p.m. with food, music and wonderful art.

During 2016, we’ll be searching for a space to call our own, a starter house of sorts, where we can have continuous exhibits, host meetings and open our doors to local art enthusiasts. We will explore purchasing and renovating a space, renting a space or continuing to find creative pop-up locations in Northern Westchester. Towards that goal, two of our many fundraising efforts for this year will include the production of an NWAG calendar and an NWAG Art Box, which will be a limited edition collection of work created by our members.

My dream of an artist collective or guild began back in college when I did a study abroad at the Bath Academy of Art in the UK. I often took the 30 minute train ride over to Bristol, home of the celebrated street artist Banksy, where I would spend hours at the Arnofini Center. This inspiring arts venue is home to a gallery and exhibition space, art shops, a café and reading room and artist studios and workshops. NWAG is just in its infancy, but it’s a thrill that, within six months, we are a vibrant, thriving group with endless possibilities. It is not surprising that artists would seek communities like these. Art-making is often a solitary activity, but working in isolation can be difficult and NWAG gives its members a creative family with whom to bond.

If you are interested in learning more about the Guild, please visit us online at www.nwartistsguild.org or send us an email at nwartistsguild@gmail.com

Leslie Weissman is a local artist and business owner of Presents For Purpose. You can see her work at www.leslieweissman.com and consider purchasing a  gift or gifts that give back to charity at  www.presentsforpurpose.com