Many of my friends and family have been asking me what to do about the fatigue and dry eyes that have occurred this past month. Let me begin by saying that digital electronic use will naturally decrease your blink rate. When you are engaged and reading something, you end up staring. This decrease in blink rate will result in an increase in the rate of incomplete blinks. Your top lid doesn’t go all the way down to meet the bottom. When this occurs, the pool of tears that lay at the bottom doesn’t get washed up over the eye to wet it properly by the top lid. This inaction leads to tear film instability and dryness results. There is an eye exercise for this.

There are also Blink Training Apps available to download, but if you put a sticky note that says BLINK on the side of your monitor, it’s less “screen” time.

DIRECT air vents blowing in your face will also dry your eyes. Forced hot air heating systems can become problematic, if you are near a vent. Air conditioning vents should also be directed away from your face. Don’t forget ceiling fans too. There are small desk top humidifiers that also can help keep the humidity levels comfortable in your workspace during cold weather. Properly clean after each use.

Set up your work space so that your eyes are looking downward at the screen. Standing desks are great if you are mobile, keep a pad under your feet and the screen is slightly lower than your direct view. When you look upward the eyes become enlarged and expose more of the surface to, you guessed it, drying out. Individuals wearing progressives (multifocals) will also suffer from fatigue with computer screens at eye level because the straight ahead position is meant for distance viewing not intermediate where your screen is. You will end up tilting your chin to catch the sweet spot located lower. You will tire from trying to clear up the view and staring will dry out your eyes.

It is also important to keep well hydrated and that means drinking 8-10 glasses of water/day. I advise my patients to keep a very large container filled with water and make sure it is finished before bedtime. Coffee and highly caffeinated beverages are diuretics and you will end up losing water.

Smoking can also exacerbate dry eyes and those individuals that wear contact lenses know that well.

Contact lens wear and increased screen time will undoubtedly end up with reduced wearing time. That is because the contacts need the water to stay wet and comfortable. The blink exercise or discontinued contact lens wear, using artificial tears formulated for contact lenses will also help with the discomfort. I read somewhere that more people are wearing their glasses because it “makes them look smarter” during the online conference calls. Our patients look fantastic in their eye glasses.

What else can you do to help your dry eyes? Warm (touch to your wrist to test warmth) compresses, light lid massage in the shower (eyes closed, look up and gently, rub your lid margins where the lashes attach to the lid), lid scrubs to remove debris like skin flakes trapped at the base of your lashes (blepharitis), omega 3 fatty acids (triglyceride form of fish oil) about 2-3,000 mg/day- check with your physician for contraindications and artificial tears properly dropped into the eye. Many people miss.

Some of you may have fatigue and dry eyes as a result of simple eye strain with all the near tasks required these past few weeks. A thorough eye exam to eliminate any tear film/meibomian gland dysfunction/lid margin issues as well as a proper refraction and prescription for appropriate lenses ie. progressive, office lenses, computer/reading lenses is in order. Until then, physical/social distance in public, face covering, disinfecting surfaces and hand washing for 20 seconds will help to keep you healthy.

Dr. Janet Woo is an Optometrist and Nutritionist who can be reached via Eye Designs Armonk. 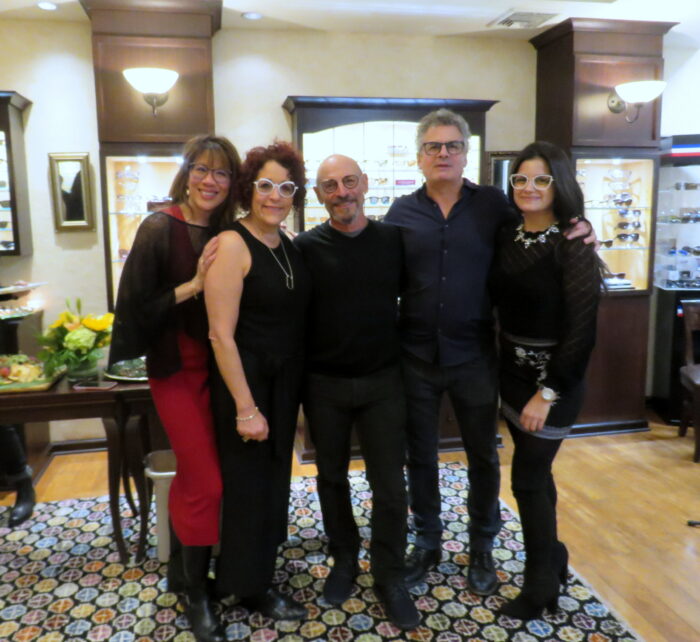 3. We are an independent business.

6. Honesty & integrity are our hallmarks.

7. We use the latest technology in lenses.

8. We bring European trends to Armonk.

9. We offer courtesy repairs and adjustments.

10. We are proud to be a part of this community.

In constructing one of his better-known sonnets, William Shakespeare wrote, “The eyes are the of the soul.” While it’s obvious the playwright was simply waxing poetic, and not referencing the importance of eye care, the adage still holds relevance in terms of the latter subject–and many present-day eye care professionals can attest to the truth of Shakespeare’s statement. Just ask Jaime Herman, founding manager of Eye Designs of Armonk, who has been in the optical business for the last 30 years.

The Westchester resident, who found himself attracted to the industry “because [of] all the different aspects to it”–from medical to science to fashion–initially began his career as a partner in an eye care shop in New Hyde Park, Long Island, where he worked for 12 years. After a brief two-year stint at another shop in Florida, he found his way to Armonk, where he has managed Eye Designs since August of 1999.

“We bring in eyewear from around the world that show the latest fashion styles and best quality,” he says, when asked what he thinks makes his business the most successful. “Whether it be digital progressive lenses, computer lenses, [or] anti-reflective coatings, we use the latest technology in prescription lenses.” Additionally, optometrist Dr. Janet Woo is on hand at the store for eye exams and contact lens fittings. The shop also has an extensive collection of children’s frames.

And as for eyewear specific to your “summer adventure?” They’ve got you covered there as well! “When I think of the summer, I think of the beach,” he says. “And [in terms of eyewear] that means…a great pair of cool sunglasses with polarized lenses.” Eager to help vacationers–especially men–“look and feel cool” while catching rays this summer, Eye Designs offers a wide selection of sunglasses from such high-end designers as Salt, Oliver Peoples, Mykita, and Maui Jim.

But despite their fabulous offerings, which have no doubt contributed to their longevity in the area, Herman notes that the success of Eye Designs lies mainly in its customer care. “[That’s] really our number one goal,” he comments. “Everything else is secondary.”

And he’s not kidding. A strong proponent of the motto, “See and be seen,” emphasizing the customer’s comfortability level in addition to how they appear, he takes pride in ensuring his customers “look good and leave happy.” Because, after all–and this one really relays the relevance of Shakespeare’s quote to the eye care business–he views eyewear “as a portrait of someone’s personality.”

“[For] the people who need to wear glasses, they’re such a big part of [these] people [and who they are] personally,” he says. “If someone’s wearing glasses, it’s basically the first thing you see when you’re looking at them. It’s a huge statement…a very personal thing, and a big reflection on the individual.”

In managing Eye Designs for as long as he has, Herman certainly recognizes the significance of this reflection, and the impact it has not only on the customers, but the business itself. “When somebody puts on an absolutely perfect pair of glasses in the store–[meaning] they can see clearly and the style looks fabulous–when they walk out the door and people see them in that eyewear [and] say, ‘Wow! Look how great those glasses look!,’ then the next question might be, ‘Where did you get those glasses?’” he says. “So, it’s important to me that our customers look great, not only for themselves, but because [in purchasing our products] they become our own representatives, in a way.”

As proud as he is of the success of his booming business, however, there is still one (well, two) facets he prides above all the rest: his daughters, Alex and Joelle. And while he’s certainly proud of them no matter what they choose to do, with his strong commitment to Eye Designs, it doesn’t hurt that Alex (25)–for the time being–is assisting him in the shop. (She’s been a member of the Armonk team since 2013).

“It’s exciting and to have her here,” he says. “I’m proud as her dad to see how she interacts with everyone she encounters in the practice and the industry. She brings a youthful energy to the practice [and] the patients seem to love her.” Meanwhile, his youngest, Joelle (18), recently celebrated her graduation from Riverdale-Kingsbridge Academy, and will be headed off to college in the Fall.

So, all in all, there’s a lot to be proud of–and Herman’s not taking any of it for granted. So much so that, despite a three-decade career in the business (and Alex presumably set to take over at some future point), he doesn’t see himself leaving anytime soon. Not that we’re complaining, but why not? It’s simply because he can’t “envision” himself in any other career. And why should he have to? He’s got all he needs right here in Armonk! “And it’s a clean business,” he adds, with a laugh. “I’m not operating on broken limbs.” He pauses, then smiles, before reiterating once again: “It’s clean, professional, and always interesting…and that’s true even after 30 years.”

Matt Smith is a freelance writer based in Chappaqua. For more information, visit www.mattsmiththeatre.com.

On Saturday, May 7th from 11 a.m. to 4 p.m., Eye Designs of Armonk is proud to invite you to our annual Oliver Peoples Trunk Show. Oliver Peoples has always been an integral part of our collection and we will be showcasing their latest spring and summer releases and celebrating great eyewear in Armonk!
Eye Designs Armonk is located at 575 Main Street in Armonk. For more information, please visit eyedesignsofwestchester.com.