For most Greeley students, summer is a well-deserved break from the stresses that consume the school year. They no longer spend their days completing piles of homework, waking up at 6:30 a.m., and preparing for exams. During summer, most students can finally relax. But those months off from school can be anything but relaxing for athletes intending to play a fall sport. For these students, every bit of free time that comes with summer is spent training for preseason, which begins in August.

Although running through the heat of summer seems unappealing for many students, Greeley varsity athletes complete ambitious summer training routines over the summer to prepare for their fall sports seasons. Junior Max Notarnicola, a three-season varsity runner, says, “For the first few weeks of the summer, I plan to run about 20-25 miles per week. By the middle of the summer I plan to increase my distance to about 30-35 miles. Leading up to preseason, I plan to run over 45 miles and I will also be doing some speed work on the track. The speed work will most likely include mile repeats at around a five minute pace.” Nortaricola’s demanding summer training will prepare him well for his cross country meets in the fall.

Preparing for the Fall Season

Cross country coach and Spanish teacher Mr. McKenney can attest to the importance of running over the summer to prepare for the upcoming season. “Running and conditioning is our sport. All cross country runners who want to do well need to run over the summer,” McKenney explains. But he admits that not all runners follow as strict of a training regiment as Notarnicola does because “summer commitments and camps make it hard to find the time to run.”

While sports that revolve around running require rigorous training, the workouts that other varsity athletes complete over the summer to prepare for the fall sports season are equally as demanding. Captain of the Greeley Girls Varsity Soccer Team and junior Rebecca Putnam says that she stays active during the summer to stay in “soccer shape,” and tries to vary her workouts to avoid injury, as she works on different parts of her game.

She states, “Two or three mornings a week, I go to my SPARQ (speed, power, agility, reaction, quickness) trainer Andrew Abt in New Rochelle, and three nights a week, I work on technique in a co-ed soccer clinic for serious high school players and college athletes home for the summer. I also practice on my own to improve specific skills like shooting.” As captain, she will also be holding kickarounds for girls who plan to try out for the varsity team.

Although upperclassmen complete rigorous training schedules to prepare for preseason, younger varsity athletes are just as committed to maintaining their fitness over the summer. A member of the Greeley girls varsity field hockey and lacrosse teams, freshman Grace Arrese explains that she plays on a club lacrosse team four times a week, and also finds time to play on her club field hockey team, which the varsity field hockey coach runs.

Arrese’s training doesn’t stop at team practices and games. “During quiet weeks,” she says, “I go on runs with my sisters and grab a field hockey or lacrosse stick and head to the turf at Greeley.” For a varsity athlete, training for preseason is a time consuming, summer-long commitment. While many non-athletes get discouraged from exercising as the temperature rises, how do Greeley athletes stay committed to their training, especially during summer? Putnam says that she is able to stick to her training plan because she knows that “in the long run, [she] is not only improving [herself], but [she] is also benefiting [her] school and club teams.” She also explains that “improving should always make an athlete excited!”

Keeping Their Eyes on the Prize

Other athletes echo Putnam’s sentiment. “Having a decisive schedule for working out helps me stay committed,” says Notarnicola. Making a plan is the first step to sticking to summer training. He also states that “a strong work ethic is the most important characteristic to staying in shape.” Athletes must be willing to run through 80 degree temperatures, knowing that their preparation will benefit their teams in the fall.

Ultimately, though the training that Greeley varsity athletes complete over the summer is strenuous and time consuming, their hard work to maintain fitness is well worth the effort, because as Grace Arrese explains, “It is the best feeling when I arrive prepared for preseason.”

Applauded by friends, family and the school community, seven Byram Hills High School students signed up to play on sports teams at colleges including Georgetown and Columbia universities in the National Signing Day celebration.

The annual day in early February marks a celebratory inking of letters of intent to accept athletic scholarships and other offers to play on teams at colleges across the country. The Byram Hills students agreed to join sports programs in soccer, basketball, fencing, crew and golf.

“Today we recognize seven amazing athletes representing five different sports,” high school Coach Matt Allen told the 200 supporters filling a section of the bleachers for the ceremony in the school’s upper gymnasium. “They are each well-rounded, intelligent and hard-working young men and women who will undoubtedly represent Byram Hills to the greatest of their abilities.”

The scholar athletes and the schools they will attend are:

One by one, the athletes were called to a dais decked in Byram Hills Bobcats colors of red and blue, where they signed their symbolic letters. Rob Castanga, the district Athletic Director, thanked the friends and family members for attending, and for supporting the athletes.

“It does take a family,” he said. “There are a lot of people involved in helping these dreams come true.” 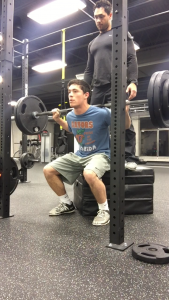 Every summer time seems to slow down just a bit only to pick back up at record speed the morning after Labor Day. Everyone has their own sources of stress during this frenetic time but for our high school athletes it’s often fueled by the worry of another year balancing the pressures of schoolwork and athletic training. Indeed, most parents and administrators would agree that this pressure has only increased over the years as the college recruiting process now begins earlier than ever. Some might even argue that the demands of this process have reached a level that has taken the ‘fun’ out of high school athletics.

Division One gym owner and Armonk-based father Karl Pfistner understands the unique worries high school athletes face year-round. As a former athlete at the high school, collegiate and Arena Football levels, Pfistner was inspired to open a gym specializing in the type of training that enhances both a student’s athletic skills and their quality of life. He envisioned Division One as a gym which would bring fun with training back into the workout, for students and adults alike.

“Good time management is such a vital part of a well-rounded life for these student athletes so we focus on teaching them how to be more effective in their training sessions to better maximize their time,” Karl explains. “When a training routine is done properly a client is achieving the absolute best results as quickly as possible, leaving more time for other areas of daily life.”

To that end, Division One’s staff includes a Nutritionist and Life Coach to better serve his high school and adult clients with a true 360-degree approach to their health and well-being. As a trainer, Pfistner believes training methods for student athletes need to go beyond the physical workouts to address the mental toughness necessary for competition. He balances this focus with providing 40-yards of indoor field turf and creative, cutting-edge and workouts which promote positivity. He attributes the success of many of his former clients, who have gone on to compete at the collegiate level, to his unique approach.

High school athletes are certainly at the prime age to push their bodies during training to discover new levels of potential but it should never come at the cost of happiness and balance during these key developmental years. As Pfistner watches his own children grow up within today’s competitive athletic climate, Karl continues to help athletes achieve this elusive balance–maximizing physical success and fun during their high school sports career.