Trump’s Tweets, revisited–and rewritten into a positive message of truth, unity and solidarity.

The real story of America.

It is for the people,

where we join together to protect humans,

It is time to remember that

peaceful protests are a hallmark of our democracy-

the people have the right to make up their own minds

as to the truth.

When the American people are divided, angry, and untrusting,

when the rights of the people to express their views are

when the hatred is too deep,

the journey begins to reflect on what truly matters

with dignity and conviction,

Our glorious history will spark movements

that address the barriers

that threaten peace in our world,

the natural beauty of our nation

the home of the free

because of the brave,

where acceptance, love, and honor,

but breathe the same air. 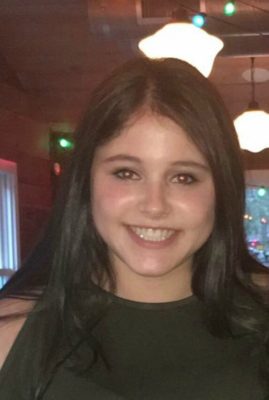 Julia Bialek will be entering her junior year at Greeley High School in the fall.

Editor’s Note: Julia told the Inside Press that she wrote this poem for school. “All the words came from Trump tweets. It is slightly satirical as it gives a positive message (as opposed to Trump’s rather negative tone).”

An Ongoing Courtesy from the King Street Salon

When the cards began to arrive for Hillary Clinton from all over the country—“from Washington State to Indiana to Pennsylvania”–Ann Styles Brochstein and Carolyn Filancia-Vento knew they had struck a chord with their post Election effort.

Ann had posted and tweeted from her popular local Hillary advocacy blog–Chappaqua 4 Clinton/Kaine(now called Left of Main Street on Facebook and on Twitter @Neighbors4Hill) and on the Facebook “Pantsuits Nation” page that a collection was underway for thank you cards to Hillary Clinton during the harrowing first few days after the election was called to Donald Trump.

“I felt so lost and devastated after the election; I wanted to do something,” said Ann, who together with Chappaqua’s Cynthia Metcalf produces Left of Main Street.  “I asked Carolyn if we could drop off at or mail to the King Street Salon, and she said yes.”

“Until about eight months before the election,” Carolyn noted, “I was a Republican. I finally realized I could never vote for that man.”  She described Ann as ‘the catalyst’ for her change of heart during long conversations together. Ann is a regular customer.  “After those, I started to also love Hillary.”

Town Supervisor Robert Greenstein cordially helped make arrangements for delivery, and to date, about 200 cards have been delivered to  the Clinton household.

Collections for cards will continue until Christmas too. Anyone who wishes to send a card to Hillary Clinton in her hometown, may mail to or drop off at this location: King Street Salon, 229 King Street #2  Chappaqua, NY 10514

For our last edition of 2016, Inside Armonk spotlights some of what makes the community great, while also looking back at the past and towards the future.

At the Byram Hills School District, technology is changing the way children learn and interact with the world. We take a look at some of the upgrades taking place in the district. In our last issue, we spotlighted the North Castle Historical Society and explored the town’s history and the people who preserve it. We return to that theme this issue, with a profile of 93-year-old George Pouder and his fight on behalf of two Civil War veterans buried in Armonk.

History, of course, was made last month with the election of Donald Trump as the 45th President of the United States. Our area, as the hometown of Hillary Clinton, played a special role in that historic race, and our photographer, Chad Kraus, was with Clinton on the final days of the election. His photo is on the cover, while others are featured inside the magazine.

When this magazine planned the cover we, like most in the media, expected that the woman pictured would be the president-elect when this magazine went to press. Even after Hillary’s loss, however, we are excited to have these photos in our pages and we hope readers, even those burnt out from election coverage, will appreciate them.

All news is local, and a presidential election is of course no different. The day after Trump’s win, we spoke to a handful of local residents about the results to see how the election impacted our neighbors. Reactions ranged from disappointment and fear to cautious optimism.

This issue will also highlight the local live music scene, with features on Armonk House and Chappaqua Station. We spotlight several local businesses, and feature Armonk resident Marian Hamilton, who launched the Ken Hamilton Caregivers Center a decade ago. Finally, the issue ends with a column on dealing with post-election anxiety, though we acknowledge many readers may be feeling very different emotions.

We wish all our readers a happy holiday season and a great 2017.