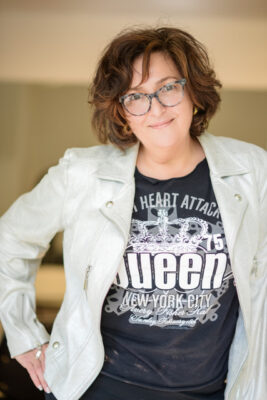 Carolyn Vento is a master hair colorist in much the same way your favorite artist is a master musician, painter, or sculptor. There are many who make a living doing what they do, but there are few who command the respect of the masters of the form. Vento likes to joke that hair is her canvas, but she’s right. Her 300-plus clients from all over Westchester and New York City seem to agree.

King Street Salon is owned by Vento’s sister, Rosemary Filancia, and her brother-in-law, Charles Fremolaro. Vento has been working with hair professionally for 37 years, and has an even longer history in the business. Her father was also a hairdresser. “I was eight years old, doing roller sets,” she said. Since her time at the family business, Vento has trained at the renowned Vidal Sassoon Sassoon Academy and has been certified by the American Association of Haircolorists. But Vento doesn’t rest on her laurels. When she’s not at work she’s at home watching new hair coloring tutorials on YouTube. “I learn from my assistant every day,” says Vento. With King Street Salon, you’re not just getting all the experience, you’re getting the lifelong pursuit of perfection.

Vento’s dedication is time consuming. “I work six days a week, 12 hours a day. What’s the alternative?” she says. You can expect to see her in the salon starting at 6:30 a.m., and you can expect her to still be there twelve hours later. After finally taking a much needed vacation, she said, by the second day, “I wished I was home.” Her dedication is unmatched. “My clients are my family. If they want to come in at 9 at night, I’ll do it.” All of Vento’s over 300 clients have her cell number, and that’s the only way she’d have it. It goes beyond merely running a business. Vento is part of the fabric of her community, and she knows it and takes it seriously.

Vento makes dreams come true in her own little corner of the world, and she’s fueled by it. Not only is it in her blood, it’s in her heart.

“I believe every merchant has the responsibility to serve the community in any way they can,” she says. This thought was running through her mind during the early days of quarantine when King Street Salon was shut down. Vento wondered what she could do to serve her community and to put food on her assistant’s table, when the idea came to her. If she couldn’t have people in her salon, she could do the next best thing and bring the salon to them with portable hair-coloring kits that she could drop off at her customer’s houses. It wasn’t as good as the real thing, but as Vento said, “It put a Band-Aid on the problem,” one that their hairdressers would thank her for later.

“I made 147 kits, and did 147 tutorials for husbands and kids,” says Vento. The kits were a huge success, and Vento put in the effort to ensure that they were applied correctly. She would make five tutorials a night for whichever relative or friend happened to be acting as her proxy. The kits were successful in large part due to the Chappaqua Moms Facebook group. All of King Street Salon’s business comes in through word of mouth, and with the support of a large group, businesses like Vento’s can really flourish. And of course it helps that no one has a bad thing to say about her.

The affection between Vento and her customers is mutual.

“I love this town,” says Vento. Growing up, she had lived above one of her father’s salons in Armonk. She returned to the area in 2012, leaving behind a highly successful salon in the East Village. Now, her former customers in Manhattan make the journey to Westchester to have Vento work her magic.

Vento is not only good at what she does, she really loves it. She adores what she’s able to do for her customers. She does it for that moment when, “A woman looks in the mirror and purses her lips, and for that split second she feels like a supermodel.” Vento makes dreams come true in her own little corner of the world, and she’s fueled by it. Not only is it in her blood, it’s in her heart. “I eat it, I drink it, I sleep it,” says Vento. It’s her whole life, and that’s the way she wants it. From the procedure itself to the customer’s reaction at the result, Vento is enthralled. After all, she must be worth every penny to bring city slickers to the suburbs.

An Ongoing Courtesy from the King Street Salon

When the cards began to arrive for Hillary Clinton from all over the country—“from Washington State to Indiana to Pennsylvania”–Ann Styles Brochstein and Carolyn Filancia-Vento knew they had struck a chord with their post Election effort.

Ann had posted and tweeted from her popular local Hillary advocacy blog–Chappaqua 4 Clinton/Kaine(now called Left of Main Street on Facebook and on Twitter @Neighbors4Hill) and on the Facebook “Pantsuits Nation” page that a collection was underway for thank you cards to Hillary Clinton during the harrowing first few days after the election was called to Donald Trump.

“I felt so lost and devastated after the election; I wanted to do something,” said Ann, who together with Chappaqua’s Cynthia Metcalf produces Left of Main Street.  “I asked Carolyn if we could drop off at or mail to the King Street Salon, and she said yes.”

“Until about eight months before the election,” Carolyn noted, “I was a Republican. I finally realized I could never vote for that man.”  She described Ann as ‘the catalyst’ for her change of heart during long conversations together. Ann is a regular customer.  “After those, I started to also love Hillary.”

Town Supervisor Robert Greenstein cordially helped make arrangements for delivery, and to date, about 200 cards have been delivered to  the Clinton household.

Collections for cards will continue until Christmas too. Anyone who wishes to send a card to Hillary Clinton in her hometown, may mail to or drop off at this location: King Street Salon, 229 King Street #2  Chappaqua, NY 10514