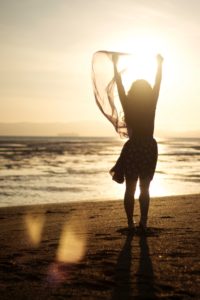 my blood a map crafted by

all the strong women that

came before, that fought before.

This copper fuel surges through

my veins, propelling me forward,

compelling me to care.

It is my guide.

I am my mother’s daughter

and for that I am proud.

She is the original owner

of my hazel eyes through which

I see this world and will it to change.

It is her voice in my head that cries

And it is her actions that

provide me with the answer:

I am sewn from a fabric of equality,

with words as the thread that

When woven into hearts

this thread has the power to free

feet to the ground so we can

climb to the clouds and capture our dreams.

My cloud is waiting.

I am indebted to all women that fought,

all women that continue to fight.

The torch is now mine and

I will brandish it with the strength

infused by you into my blood.

It will illuminate the path and

serve as a comfort, for the blood

in my body and the torch in my hand

remind me that I am never alone.

I am continuing this fight

Despite all the ground that has been

touched with light, there is still darkness.

Only when there are no more ceilings to shatter,

because we have surpassed every boundary,

of glittering glass, will the darkness

be eradicated for good.

A tapestry of history,

a slate for the future.

One day, when I have the honor

of passing on my blood,

I hope that it will be an artifact,

rather than a tool,

that the place to which it leads

will have been found and excavated

for its precious treasure.

But if not, I hope to proudly pass

my torch to the next,

knowing that she, too, is dreaming

of following her blood. 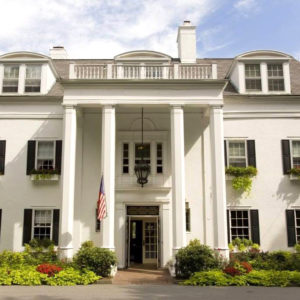 Whether an intimate dining experience with ‘just mom,’ or an event for the whole family, festive gatherings on Mother’s Day are a long held tradition at the Kittle House.Built as a barn in 1790 and named after local farmer John Kittle, how appropriate it is that the Kittle Barn and Carriage House began its existence with a farm-to-table connection, a philosophy and tradition that has continued throughout the years. Crabtree’s Kittle House established itself as the farm-to-table pioneer in Westchester County and has maintained its excellent reputation as an outlet for the finest sustainable, naturally raised and grown products from small, artisanal farmers located in the Hudson Valley and beyond. 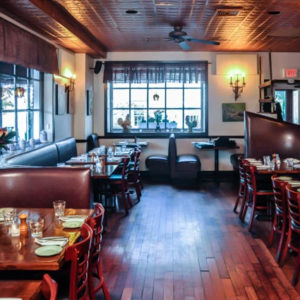 Family gatherings have a rich history inside Chappaqua’s eclectic, new world cuisine restaurant. Here, “New York and Parisian style seating lends a city-like feel to a small town joint.” Though Le Jardin has its origin roots in French cuisine, its many other influences have transformed it into the place where you can get a little taste of everywhere. The interior is cozy and inviting, while the outdoor patio (seasonal & weather permitting) offers patrons a truly inviting dining experience surrounded by a beautiful garden–seemingly plucked from the grounds of Versailles and dropped in the little hamlet of Chappaqua. From French classics and steaks, Classic Latin style tacos done to perfection, onward to nationally recognized award winning BBQ and some of the best burgers around, Le Jardin has it all and does it with service that will bend over backwards for you. 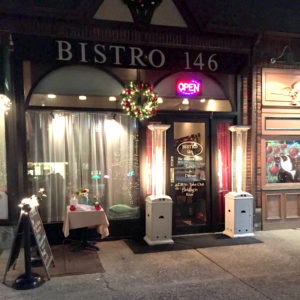 Pleasantville residents and visitors alike have been blessed since the quaint and warm Bistro 146 came onto the scene. Still a local fine dining favorite, Bistro 146 has traditionally offered a pre-fixe menu on Mother’s Day. This year, they are promising to include two signature dishes: a Maine Lobster Clam Bake, ‘our style,’ and their ‘famous’ Premium seafood paella! 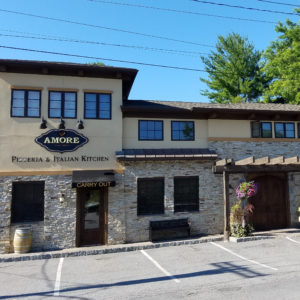 Mother’s Day and any day at Amore in Armonk means experiencing the spirit of seasonal simplicity in Italian cooking. Proprietors Mark & Joe Mazzotta describe the menu as “a nod on traditional classics infused with modern-innovation… thus, resulting in the classics elevated to new levels.” An aroma of brick oven pizza and roasted garlic permeate the room. It is comfort food that is truly palate pleasing… “a simple joy.”   The original building was rescued from a dusty, decades old roadhouse and reincarnated into a cozy trattoria–resembling a Tuscan style farmhouse eatery with a rustic elegance inside & out. Established in Armonk almost 20 ago, the new ‘reinvented’ setting is centered in the heart of downtown. 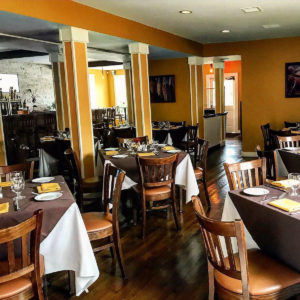 An exciting newcomer promises a “different dining experience this Mother’s Day.” Inka’s Seafood Grill is inviting you to reserve soon to “celebrate all the Moms in our lives.” A special three-course prix fixe menu is being offered, with both Peruvian and American selections. $55 per person. Limited outdoor patio seating, weather permitting. Reservations recommended.

Held annually, The Human Rights Institute for High School Student Leaders promotes student awareness of human rights issues on both local and global levels, and empowers students to become Upstanders by creating and implementing Action Plans of their own.

“Scarlett Lewis emphasizes the importance of empowering youth by choosing love over angry thoughts, inspiring bravery, and being an Upstander. This message reflects what we try to promote through our annual Human Rights Institute, to inspire students to make a difference and to take positive action for change,” said Julie Scallero, Co-Director of Education at The Holocaust & Human Rights Education Center.

The Holocaust & Human Rights Education Center hosts the Institute to enhance the teaching and learning of the lessons of the Holocaust to support the right of all people to be treated with dignity and respect.

Student facilitators will lead small-group workshops on a wide-range of human rights issues.

Students and teachers implement Upstander programs during Upstander Week, May 21 – May 25, 2018, (as proclaimed by Westchester County Executive George Latimer).

Teachers will also participate in two workshops, one with our keynote speaker, Scarlett Lewis, and the second one with Judith Altmann, Holocaust survivor.

Four young women share what they learned or inherited from their mothers and grandmothers.

A Horace Greeley High School junior, Krishna Patel realizes that she has a very different reality than her grandmother’s experience at 16-years-old. “My life consists of scurrying from one extracurricular to the next, staying up late to get my homework done, and spending the weekends with my friends. My grandmother dropped out of 10th grade to get married and start a family of her own, as was common in the 1950s in rural India.

I will never forget when she presented me with two thick silver anklets.  I was 14 and she was visiting from San Francisco.  She called me into the kitchen of our house in Millwood.  She said she had something for me.  “The same ones I wore on my wedding day, 60 years ago,” she said.

“I wasn’t much older than you.”

Krishna appreciates how her grandmother found the courage to break from tradition to become a strong, outgoing, powerful woman, and set the precedent for the other women in the family to do the same. “When my grandfather, a prominent Assemblyman, was imprisoned due to his political views, my grandmother continued to be an activist for reform, against his wishes due to concerns for her safety. My grandmother was very brave when, at 40, she had the chance to join her brother in the United States.

She taught herself English and took up a job at a perfume factory to finance a new life here.”

“My grandmother’s twin had a son who became the local village butcher. Every day, he wakes up at 4 a.m. to slaughter a pig. He spends the rest of his day selling pieces of meat in a hot, crowded, smelly, open air market.  My mother is a dermatologist who uses her hands only to perform delicate skin surgeries. I often ponder what would have happened to my grandmother, my mother, and me if the second born twin married the rice farmer.”

It is possible be both the same and wildly different from the women in one’s family. In Hannah Fenlon’s family, Hannah learned cultural traditions by cooking with her great grandmother and grandmother, just as her mother and aunts did. “Whatever the size or shape or “mistakes” my little hands made when we gathered to make dumplings, I also saw my great-grandmother’s expert, lovely hands pinching the dough just so, plopping them in boiling water and then, scooping the delicious dumplings as they floated to the top of the pot.”

Hannah, a junior at Horace Greeley High School, also inherited creative abilities and attention to detail from her grandmother and great-grandmother who were talented seamstresses. “Ever since I was a little kid, I liked arts and crafts.” says Hannah. “And I loved learning to quilt.”

Teaching yoga, sharing a laugh and traveling are among the many things that connect Alexis Draper and her mother, Susan, of Armonk. Alexis, now a freshman at Texas Christian University, recalls a special summer in Todi, a small village in the hills of Umbria, Italy.

This trip was in preparation for Alexis’s first year of Italian study at Byram Hills High School.  Each morning, Alexis said, she and her mom “left their little apartment and walked down the cobble stone steps to the pastry shop in town, and then went to our classroom to learn Italian. Though we lived there for only two weeks, we progressed from just waving “hello” to having small conversations with the lady who would feed the stray cats, with the woman from our favorite boutique, and with the servers in the restaurants.”

She and her mom took the afternoons to drive to different ancient towns, exploring places like the grandiose Basilica of San Francesco in Assisi, hiking up the mountain at Cascata della Marmore (waterfalls), and riding a birdcage-like funicular to the top of Gubbio. “All the sites were spectacular, but the magic of the trip was really in Todi itself because my mom and I learned something new together every day.”  On one of their last evenings in town, Alexis and her mom participated in a cooking lesson at a local woman’s home. “We stumbled a bit through our recipes in our new found language but we enjoyed the fruits of our labor, dining under the stars with other travelers from around the world.”

As Alexis, Hannah, Maddy and Krishna shared these formative experiences with me and what they learned from the women in their families, I was reminded of a trip I took in 1995 with my grandmother to Weihai, China. It was the first time I met my great grandmother and my great aunt, who had been sent to a re-education labor camp during the Cultural Revolution.

My grandmother left behind her family at age 20 when she fled Communist China with my mother and her infant son. Her life journey took her from China, to Hong Kong, then Brazil and finally the United States.  When we were returning to New York, my great aunt gave us bundles of seaweed to take home.  She had roamed the shores surrounding Weihai, a city on a peninsula, to collect the seaweed. She dried the pieces in the sun and then wrapped them in scraps of cloth. She didn’t  have much money but arduously gathered these fragments culled from the sea of their hometown. Somehow, we made it through customs with those pungent bundles the size of pillows.

That seaweed connected three generations of women. That gift to my grandmother from her sister’s gnarled hands was my inheritance of courage, love, and hope.