The White Plains-based Holocaust and Human Rights Education Center (HHREC) held their annual gala on October 26th. The room at the Mamaroneck Beach and Yacht Club was packed with supporters dedicated to the HHREC’s mission of “learning from the past, protecting the future.” Grace Bennett, publisher of both Inside Chappaqua and Inside Armonk magazines and Paul Elliot, the Founder & CEO of ELCO Management, a portfolio management company were the evening’s honorees. Also in attendance at the event were Congresswoman Nita Lowey, Westchester County Legislator Michael B. Kaplowitz, Deputy County Executive Kevin J. Plunkett, County Clerk Tim Idoni and New Castle Town Supervisor Rob Greenstein.

Bennett first became involved with HHREC after writing about her father, Jacob Breitstein, a Holocaust survivor in her “Just Between Us” editor’s column in Inside Chappaqua. A reader of the magazine introduced her to the non-profit and she has been an active leader in the organization ever since.

Grace received the Bernard J. Rosenshein Courage to Care Award. She joined HHREC’s Advisory Board in 2004. For the past 13 years, she has made innumerable contributions in her roles on the Board of Directors, the Advisory Board and GenerationsForward.  As the daughter of two Holocaust survivors, Grace has a passion for Holocaust remembrance and has been instrumental in guiding our educational programs,” noted Millie Jasper, HHREC’s Executive Director. She has frequently profiled and highlighted HHREC’s achievements and programming through her magazines and via social media.

Elliot, who is a Chartered Financial Analyst (CFA) has used his business acumen to help several non-profits including the Rabbinical Pension Fund, the Community Synagogue in Rye and the Neuberger Museum of Art in Purchase. He joined the Board of HHREC almost two decades ago.

“Paul was awarded the Eugene M. & Emily Grant Spirit of Humanity Award. He has been an active member of the Board of Directors for 19 years and has shown unwavering support for our programs and events. Most recently he spearheaded the creation of the Endowment Fund, which has seen considerable growth since its inception,” commented Japser.

The HHREC offers several workshops, traveling exhibits and subsidized trips for educators. The Holocaust Survivor Legacy Education Project, an interactive database of the oral history of Westchester survivors is used by teachers to educate their students about the Holocaust. The organization also created a Human Rights Institute (involving approximately 30 schools each year), which helps shape student leaders to fight hate and bigotry in all its forms by introducing the concept of being an ‘upstander’. In addition, the HHREC’s Speakers Bureau helps put a human face on the Holocaust by having survivors and/or liberators tell their stories. Each year the speakers reach more than 25,000 students and adults.

The evening concluded with a moving speech by Ellen Kaidanow, a GenerationsForward member who told the story of her mother-in-law also named Ellen Kaidanow, who was only 5-years-old when her mother, father and two sisters were all forced to move from their beautiful home in the Ukraine to a walled Jewish ghetto. Ellen tells the story of her mother-in-law’s life as a young girl in the ghetto and her miraculous tale of becoming the sole survivor of her family at age six. The GenerationsForward program consists of children and grandchildren of Holocaust survivors recounting their family’s stories as the number of Holocaust survivors is dwindling every day. 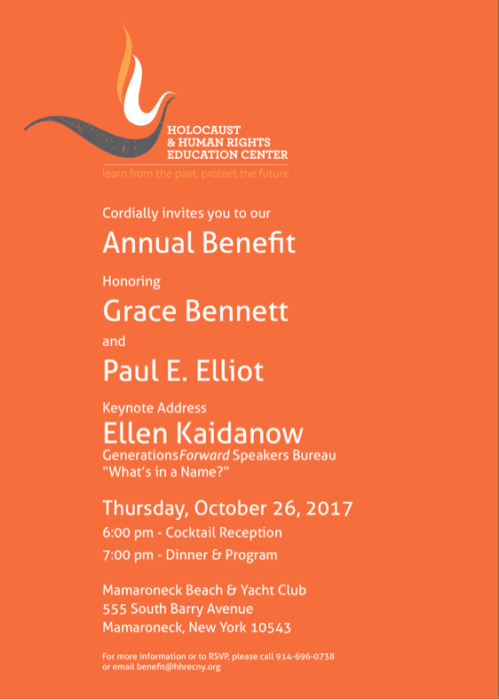 Grace Bennett from The Inside Press will be honored along with Paul E. Elliot of ELCO Management Company.

Ellen Kaidanow, a member our GenerationsForward Speakers Bureau, will give the Keynote Address “What’s in a Name?”

P.S. If you are unable to join us, please consider
supporting our organization through a membership.

The Holocaust & Human Rights Education Center is having a GenerationsForward Open Meeting on March 21 at 7 p.m.

Westchester Location To Be Determined.

GenerationsForward, a second-and-third generation Holocaust Survivor group, is run by the Holocaust & Human Rights Education Center.  The group meets monthly and provides training for  members to help educate and continue the legacy.  Jill Sarkozi’s group, Safekeeping Stories, has helped GenerationsForward members write their parents’ or own experiences, for example.