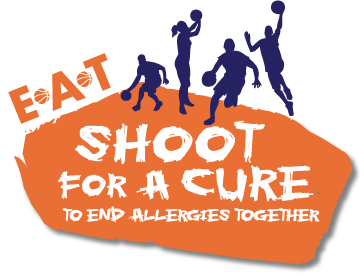 Lace up your sneakers! Michelle Feit Isban, a parent of a child with multiple anaphylactic food allergies, has created an event with an amazing group of food allergy families called “EAT’s Shoot for a Cure and Family Fun Day” on May 19 from 1-4 p.m. at Breezemont Day Camp. The event will feature basketball games for the whole family and carnival-style activities. Visit eat.rallybound.org/shootforacure for additional information.

The FARE Walk for Food Allergy, presented by Mylan Specialty L.P., raises critical funds and awareness each year to support Food Allergy Research & Education (FARE) in its mission to improve the quality of life and the health of individuals with food allergies, and to provide them hope through the promise of new treatments.

Join FARE and the food allergy community in Westchester to raise critical funds for and awareness about this growing public health issue. The FARE Walk for Food Allergy in Westchester will be held Saturday, October 10th at Glen Island Park in New Rochelle at 1pm.

This year, tens of thousands of people will gather at walks in nearly 60 communities nationwide to support their loved ones, friends, co-workers and neighbors living with life-threatening food allergies. The FARE Walk for Food Allergy offers fun activities for the entire family while helping to advance food allergy research, education, advocacy and awareness initiatives.

“Fifteen million people in the United States are living with food allergy, a life-altering and potentially life-threatening disease,” said Donna McKelvey, senior vice president and chief development officer at FARE. “It is for each of these individuals and their families that we work to find life-changing treatments, educate, advocate – and of course, walk. Every step we take and every dollar raised brings us closer to the day when we say FAREwell to food allergies.”

Sandi Kornblum, a Westchester resident and parent of a child with food allergies, is Westchester’s Walk Chair. She shares, “I am very excited about the 6th annual food allergy walk in Westchester. We are working diligently and planning a spectacular family day with fun-filled activities for the kids. Please fundraise and register to attend on October10th to help spread awareness as we walk together towards progress and growth in the research and education of food allergies.”

The 2013 and 2014 FARE Walk for Food Allergy programs raised over $3 million each. Participants can sign up to walk individually or as part of a team. For more information, or to register or volunteer, visit www.foodallergywalk.org/westchester2015. Sponsorship opportunities remain available, enabling businesses to show their support for families who are managing food allergies.

ABOUT FARE
Food Allergy Research & Education (FARE) works on behalf of the 15 million Americans with food allergies, including all those at risk for life-threatening anaphylaxis. This potentially deadly disease affects 1 in every 13 children in the U.S. – or roughly two in every classroom. FARE’s mission is to improve the quality of life and the health of individuals with food allergies, and to provide them hope through the promise of new treatments. Our work is organized around three core tenets: LIFE – support the ability of individuals with food allergies to live safe, productive lives with the respect of others through our education and advocacy initiatives; HEALTH – enhance the healthcare access of individuals with food allergies to state-of-the-art diagnosis and treatment; and HOPE – encourage and fund research in both industry and academia that promises new therapies to improve the allergic condition. For more information, please visit www.foodallergy.org and find us on Twitter @FoodAllergy, Facebook, YouTube and Pinterest.

The information presented here was via a Press Release from The FARE Walk for Food Allergy.

In the carefree days of yesteryear, people gave nary a thought to the types of food they chose to savor. Parties were planned and no one asked whether anyone was allergic to anything. Children took their favorite peanut butter and jelly sandwiches to school, no questions asked. Supermarket products were fairly uniform; white Wonder bread reigned in the bread aisle and Fluff was a pantry staple. The admonition, “stay safe,” pertained to keeping a close eye on one’s valuables and person.

Fast forward to today, and life, as it relates to food, has totally changed. Peanut-free tables are de rigueur at schools and camps. Dinner parties are painstakingly planned around friends’ gluten-free, lactose-intolerant, vegetarian/vegan and organic-only (to name just a few) diets. For some, food choices are governed by the desire to maintain a sensible weight; “jumping on the gluten-free wagon makes it easier to watch my diet,” says one local resident who requested anonymity. Still, for an increasing number of people for whom what passes through their lips can be a matter of life and death, food is far more and increasingly complicated. The term “food allergen”, now an integral part of contemporary language, is defined as a substance that causes a reaction in a person who has a food allergy.

What are these maleficent allergens and why should we care? The most common allergens–referred to as “the top 8”–are: dairy, egg, wheat, soy, peanuts, tree nuts ( i.e. walnuts, pecans, almonds, and cashews), fish and shellfish.

The National Restaurant Association places a high priority on everything related to food safety. ServSafe, their food training and safety program, is regarded as gospel among the 500,000 restaurant  businesses they represent. They cover the rudiments (including hand washing, proper preparation and temperature guidelines) as well as the more extensive allergen training.

f the basic foundations of food safety is to be using a reputable food supplier.” When frozen items arrive: “Look at the truck. Keep track of the temperature they’re being delivered at.”

The issue of food safety in general (with or without allergies) is practically mind-boggling in modern times. To eat or not to eat is not the question; it is instead, is it safe to eat? Normal precautions like washing all fruits and vegetables are not sufficient for some. Hyper-vigilance toward anything containing pesticides, GMOs, additives and hormones prevails.

Sage advice is proffered by Joseph Gentilesco, Captain of the Chappaqua Ambulance Corps. He begins by recounting a mother’s call to 911, saying that her young son who has a food allergy was going into shock. She had administered their EpiPen (one of a handful of well known trade-named epinephrine autoinjectors), and was waiting for it to take effect. The boy recovered and was fine until the next day when the same call came in. This time, the boy’s older brother had been eating peanuts and the younger one helped himself. The moral of this story is that both preparedness and supervision play key roles in food safety too.

“Shock is a life-threatening situation,” Gentilesco says. Even if people have used an EpiPen and feel confident that they or their friend or relative will be fine, Gentilesco prefers that they call 911: “We’d rather come and hear we’re not needed [than be called later for something much more serious].” He also emphasizes that the presence of an EpiPen (and a backup in case a second dose is needed) is not enough. Careful, periodic examination of the expiration date is also vital. When driving a bus for Chappaqua Transportation, another of the hats he wears, Gentilesco not only asks all allergic children to show him where their medicine is stowed; he goes the extra mile to verify that the medicine is effective.

Food safety is paramount in Dr. Susan Rubin’s mind. Rubin, a self-described eco-gastronomically focused food educator and leader in the world of school-food activism, cites many threats including one in corn and soy, both of which are likely to have a residue of the pesticide Roundup. “Your best bet is to go organic,” Rubin urges. That being said, she also advises being discriminate in determining what is truly organic. Rubin cautions against the “health halo” of enterprises like Whole Foods where the perception is that everything is organic, while in reality, it is not. Rubin grows her own food–she is the co-chair of the Chappaqua community garden–and is a member of the Roxbury Farm CSA (Community Supported Agriculture). She also mentions a rule of thumb  she instilled in her children at a very  young age, “If you can’t pronounce it, it’s not food.”

Sarah Ellen Rindsberg embraces the knowledge acquired herein and does not take it with a grain of salt.

Food Safety: Be an Advocate for your Family

For many families here and around the world, a laissez-faire attitude toward food consumption is not an option. Chappaqua resident Ellen Byck vividly recalls the moment she realized that food choices were to be strictly regulated. Her young daughter Sasha had been terribly ill and, despite many visits to the pediatrician, no diagnosis had been made. So, when Sasha was two years old, Ellen took her to see a gastroenterologist. “He knew immediately by looking at her,” Ellen says.

The specialist diagnosed celiac disease–an autoimmune disorder in which gluten consumption harms the small intestine. Blood work and a gluten-free diet were ordered. Sasha, now a healthy college freshman, categorizes herself as “a very cautious person.” She reads labels religiously and eschews risk by avoiding known dangers–gluten, peanuts and peas.

She emphasizes the importance not only of having an Auvi-Q device (another of the well known epinephrine autoinjectors) on hand at all times, but being trained in its use as well. Sasha plans to study hospitality and is cognizant of the skill set she brings to the table:

“Because I’ve had these allergies, I know what it’s like to order something and not have it prepared properly. I’ve had to suffer the consequences.” Under her watch, she vows to “make sure that what people are asking [in terms of dietary requests] really does happen.”

Another recent HGHS graduate, Rachel Schelling is her own best advocate. “Not long ago, I went to a new restaurant in Mount Kisco for the first time. I said, ‘I have a severe nut allergy, what’s your protocol?’” The staff’s explanation of their precautionary procedures assured her that it was safe to patronize the establishment. Rachel credits her parents for teaching her what to ask and how to listen, interpret and follow up. Parents who teach and model effective allergy interventions empower their children as they grow.