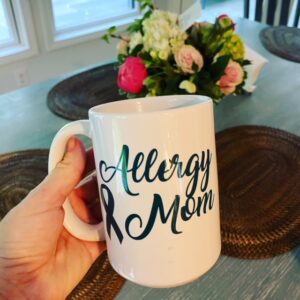 Food allergies affect approximately 5 percent of children and 4 percent of adults in the U.S, according to the National Institutes of Health. Food allergies can sometimes trigger a life-threatening anaphylactic reaction marked by constriction of the airways, making it difficult to breathe. Living with this threat, especially for parents of children with food allergies, is frightening and challenging. Part of the challenge is navigating a life where many people either are blissfully unaware of or simply do not appreciate the seriousness of food allergies.

The Importance of Spreading Awareness

Armonk mom Michelle Isban, as a former teacher, knows that educating the public is the best method to ensure that her food allergic daughter can live a healthy and safe life. Michelle’s achievements include having helped promote awareness at Armonk’s two playgrounds, IBM and Lombardi parks. Signs posted at the playgrounds list common food allergens and alert park-goers that allergic reactions can happen from tactile contact so children should only eat at designated picnic areas and wash their hands before using the equipment.

“Inclusivity is the most important thing to me,” says Isban. “If my daughter goes on the monkey bars right after a child who just ate peanut butter, she can have an anaphylactic reaction. I want her to feel like she can run safely onto the playground after soccer practice.”

Isban credits the Town of North Castle Recreation Department for their swift action in installing the signs upon her suggestion. “Matt Trainor, superintendent of the rec department was really open to it, raised it at a town board meeting, and got it approved. A few weeks later, the signs were up.”

“It’s upsetting when your child is excluded,” reveals another Armonk mom. “I don’t expect another parent to bake something for my child, but I’m angry when I don’t get a head’s up about a class party or when parents show up to soccer games or practices with Dunkin Donuts or cookies. Your child has to watch empty-handed as their friends delight in their delicious treat. With just a little notice, I can easily bring a comparable treat for my child.”

Ever since Isban’s daughter was diagnosed with allergies, Isban has advocated for her daughter and for food allergic children. With the help of a lawyer, she helped get a 504 plan, the first in Byram Hills granted for food allergies. Section 504 of The Rehabilitation Act of 1973 requires public schools to offer accommodations for eligible students with disabilities. Now, other families in the district can more freely obtain this legally binding plan to address how the school will accommodate their child’s food allergies.

Isban also started an Instagram page called allergymomwithamission where she recommends new food brands without common allergens and collaborates with companies that make allergy-safe food products. Every Wednesday, she shares a food allergy hero, a young child or teen, and what they are doing in the food allergy community.

Isban uses any opportunity presented to spread awareness. She donates children’s books about food allergies to the school, she organized the Teal Pumpkin Drive in Armonk to collect non-food items for Halloween, she has co-chaired walks for the non-profit Food Allergy Research and Education (FARE), and helped organize the 2019 Shoot For A Cure fundraiser at Breezemont Day Camp for the non-profit End Allergies Together (EAT) that raised over $60,000.

A teacher at heart, she will never pass up a teachable moment. Once on an airplane, hearing another passenger complain that peanuts were not being served, Isban approached the woman and explained that her daughter could have an anaphylactic reaction if a bag of peanuts was opened and the dust circulated in the air. She offered to share her own granola bar with the woman.

“I teach my daughter that food allergies don’t define you but they are part of you so it’s important to teach other people,” says Isban. “Everyone can make a difference and you don’t have to stay quiet.”

Legislation Passed That Can Save Lives

Chappaqua mom Stacey Saiontz, a former lawyer, has also committed to using her skills to advocate for legislation to make the world a safer and more inclusive place for people with food allergies. Her 13-year-old son, who has 26 food allergies, has been her driving force.

Twelve years ago, Saiontz had an idea to create a law that would require all New York State teachers to be trained to recognize a child in anaphylaxis and how to administer an epinephrine auto-injector. While at a child’s birthday party whose grandfather was a state senator, she approached the senator with her idea and he encouraged her to draft proposed legislation, which he later sponsored. Sadly, this bill has taken turns getting passed in either the senate or the assembly, but never both. Saiontz continues to push for this Teacher Training Bill (A523), which is currently being sponsored by Assembly member Linda Rosenthal.

She has since advocated, along with other Chappaqua parents, for multiple bills that have passed into law. Senate bill S7262A allows schools to stock epinephrine auto injectors and permits them to be administered in emergency situations without a prescription.

“Many kids try foods at school that they may not know they are allergic to and they can have a reaction. Previously, nurses’ hands were tied and they couldn’t use an EpiPen on a child without a prescription,” explains Saiontz. “A throat can close within seconds to minutes depending on the reaction and waiting for an ambulance could result in death.”

A third bill was inspired by Saiontz’ son when he was in the 4th grade and really wanted to take the bus but bus drivers were not authorized to administer epinephrine. Saiontz included her son in the whole process, brought him to Albany, and he proposed a law allowing bus drivers to administer epinephrine. Assembly bill A7635A was passed into law.

Saiontz is currently working on restaurant legislation in New York State that would require training of restaurant personnel and adding allergens to the menu. On the federal level, Saiontz and fellow local advocates advocated for the passage of the FASTER (Food Allergy Safety, Treatment, Education, and Research) Act that now requires sesame to be labeled on packaged food.

Saiontz has been bringing her son with her to Albany to advocate since he was 4-years old, along with a group of fellow parents and their kids.

“I don’t want him to feel sorry for himself.

I want him to see what he can do to make life better for him and others,” emphasizes Saiontz.

Ella Ilan is a frequent contributor to the Inside Press. As a parent herself of a child with food restrictions, she is all too familiar with the many challenges required to provide healthy safe meals for a food allergic child.