Food trucks will include Mobile Pie, Walter’s Hot Dogs, The Melt Mobile and Three Little Pigs. Dessert will be available at the Great Chappaqua Bake Sale and also at Penny Lick Ice Cream’s cart which will feature a custom CCBF flavor in homage to author Bernard Most: If the Dinosaurs Came Back for Ice Cream. The Mike Risko Band and the Random Farms Kids’ Theater will provide entertainment.

Ninety-four authors including favorites like Victoria Kann, Rosemary Wells, Nick Bruel, Jane Yolen and Mark Teague will sign books and chat with their fans. Books are available through Best Book Fairs (cash or credit cards accepted). The festival, an all-volunteer effort, will also feature 18 new authors. A focus for the festival’s organizers was bringing books to a more diverse audience in 2018.

Dawn Greenberg, founder and executive director of the festival, noted: “Each year the author selection committee attempts to find books that will offer our visiting families the opportunity to be transported by our authors to different and diverse worlds, giving them a window on all kinds of characters and experiences–real and fictional.  We are thrilled to bring in a wide selection of authors and genres this year who are getting great buzz in the children’s publishing world for their riveting stories and fresh voices.” 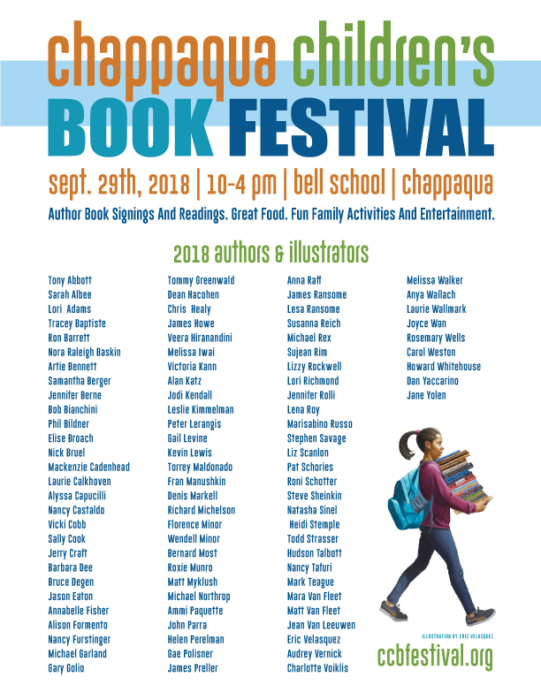 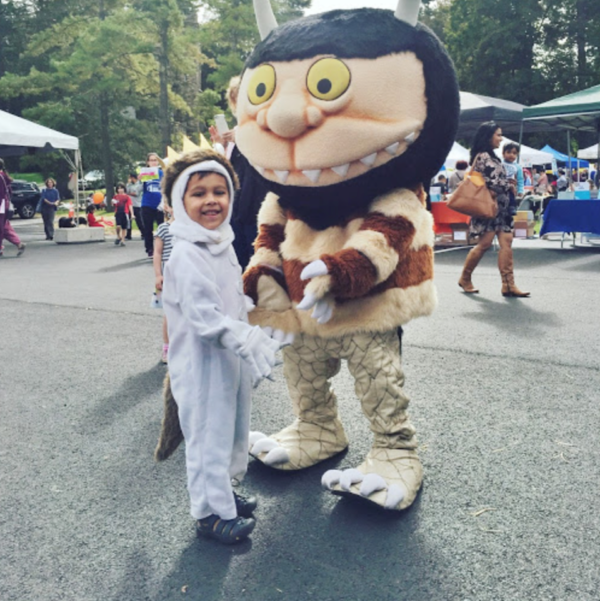 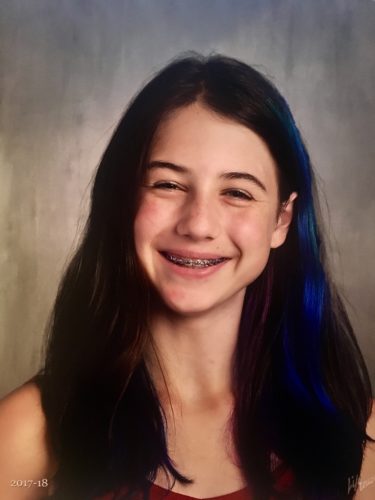 What happens when three wonderful organizations in town team up to help New Castle residents and merchants alike enjoy the holiday season with artist appreciation and good cheer? You receive ‘Holidays Around Town’… and its priceless gift of community bonding.  Sprinkle in some joy to the world, Chappaqua style, and it will be a weekend to cherish and remember forever. 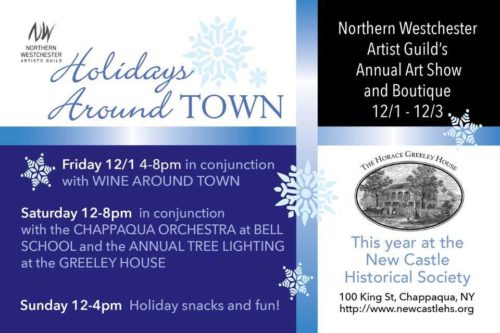 The Chappaqua Orchestra Concert and Tree Lighting at the Greeley House are a time-honored tradition in New Castle that take place the first weekend in December. This year, however: “We’re kicking things up a notch,” confirmed Leslie Weissman, co-founder with Peg Kafka-Sackler of The Northern Westchester Artists Guild (NWAG), a not for profit consortium of some 75 area artists. NWAG took the initiative to spearhead Holidays Around Town and the plans are as follows:

Weissman and Kafka-Sackler said their motivation for producing the weekend go well beyond any dollar sales. They emphasized the unique role art can play in bringing a community together. Kafka-Sackler described a universal  “feeling of civility” art creates. “It creates a wonderful environment for neighbors and friends to mingle,” she said.  Weissman described a “calming effect” too. “It’s Art for Good.”

To keep abreast of the plans for Holidays Around Town and for news of other NWAG events, please visit www.nwartistsguild.org.

Grace Bennett is the Publisher and Editor of the Inside Press, and hopes to partake in the festivities.