The Horace Greeley Scholarship Fund (HGSF)’s objective is to “make up the difference” between the actual costs of college and all other financial resources available to students and their families. The goal is to make college a reality for all Greeley students. Megan Conroy is one of the recipients who will be eternally grateful to HGSF. The 2017 Greeley grad graduated from Adelphi University’s nursing school program in 2021 and is working as a medical surgical nurse at NYU Langone in Mineola. “I probably wouldn’t have been able to graduate if I didn’t get the money,” says Conroy. “I was touched that every year I got some grant.”

There’s no question that there is a very high cost of a college education these days. Tuitions are rising yearly for both private and public schools. Macchetto is not surprised about the need in the community. “The cost of education and raising kids has grown exponentially. Families are facing things like that and having the disposable income to pay for college has become more of a challenge.”

Applicants may apply all through their college years and the grants are based on need. It is open to any Greeley grad who is pursuing a four-year degree any of those years and they must apply each year as their financial situations may change. “We are looking for kids to get the degree. We want them to get through and to facilitate that as much as we can,” says Macchetto. The process is objective and extremely confidential. Their newly launched updated website makes it very easy to apply with a very high level of security. An outside consultant reviews the financial situation of each applicant and recommends the distribution to the Board’s Grants Committee. The only member of the Board who knows the identity of the recipients is the Board Treasurer who cuts the checks. It’s entirely a need-based system. “Everyone who qualifies gets something. Based on their gap, we look through how much we can cover that is meaningful enough to get to where they need to go,” says Macchetto. “The current cap per applicant is $20,000 per year. The average grant in 2022 was just over $8,000.” In 2021 they were able to grant $403K of $883K that was demonstrated as need.

“Our donor base is helping the same kid who is on the same sports team as your kid or the kid you’re on line next to at Lange’s. Even though it is anonymous, it’s all about the community, we have a lot to be proud of,” says Macchetto. “And it’s another example of our community prioritizing and valuing education,” says Julianne Cohn Metzger, Vice President of the HGSF Board. “We’re assisting our neighbors, our neighbors’ children and friends to continue the education they’ve been lucky to have here in Chappaqua.”

The seeds for the HGSF were planted in 1945 when the senior class of Horace Greeley High School gave $300 to start a fund for students who needed help paying for college. That spirit of students helping students has continued with the Greeley PTA Senior Musical that is a fundraiser for the HGSF as well as the very popular fall Spelling Bee that is run by the Greeley S.H.A.R.E club. “Another great way of students helping students,” says Macchetto. “The Bee is open to a wide variety of the community. While it’s academic, it’s about having a good time.”

The fall annual appeal mailing and the spring event are the two major fundraising vehicles. “The spring benefit is a nice way of getting everyone together and will be in person this year,” says Macchetto. Another fundraising tool is Senior Signs currently priced at $20.23 for the class of 2023. “It’s a fundraiser but it’s also teambuilding and getting our logo out,” says Macchetto. On the horizon is a Pickleball Tournament, and people may also make donations in honor of or in memory of someone.

Each year two members of the Chappaqua Central School District Community are honored at the benefit. This past spring Rita Santelia received the Taylor Family Award of Distinction for student and community support that goes above and beyond. Santelia, the mother of five, has been a parent volunteer over many years including PTA Chair of both Bell School and Horace Greeley High School. “I was so humbled to receive this award,” says Santelia. “I wondered how this could just be for me since I wasn’t doing each volunteer experience alone.” She was very involved with the Senior Musical, and it means a lot to her to know that her work on the Senior Musicals would be another way to help seniors and the HGSF. “All proceeds from the show are donated. In years prior to Covid, Senior Musical has been a huge benefactor to the Horace Greeley Scholarship Fund through the help of the community that comes out to watch the shows,” says Santelia. “We look forward to many more to come, as they will be great benefactors of the Horace Greeley Scholarship again and again.”

Joe Kearns, a Chappaqua physical education teacher and the varsity football coach who was the winner of the Ed Habermann Award last spring, grew up in Millwood and was a recipient of HGSF scholarships. Bridging the financial gap with scholarships from the HGSF made a difference for the 1996 Greeley grad and his three younger sisters who also received grants for their four years of school. Kearns attended New England College in New Hampshire and studied Kinesiology. The award made Kearns appreciate where he came from and how willing people were to help. “It was really cool that a place that’s known for its wealth would have a scholarship set up for people in its own town that don’t have much money,” says Kearns. “It gives you a sense of pride and appreciation to the point where I wanted to come back. When you teach and coach here and you know that it’s a community where the only reason you got to go to college and got to be a teacher was because of the generosity of the people here.”

Winning the Habermann Award that honors a member of the community for their dedication to students was very meaningful for Kearns. “It’s the biggest honor you could get. You’re being recognized for the whole reason you got into education,” says Kearns.

Cohn Metzger sums up the importance of supporting the HGSF. “For many families in our community it makes a difference between enrolling and not enrolling, and for their child to pursue their dreams. Your contributions enable them to do so.”

For more information about the Horace Greeley Scholarship Fund, or to apply or donate, go to their new and improved site hgsf.org

Get ready, get set… everyone is invited to join the fun and take the Escape from Sing Sing plunge at beautiful Louis Engel Park Beach in Ossining! You’ll be helping to benefit Westchester residents facing hardships and raise some much needed dollars for local high school scholarships too, thanks to the efforts of the Gullotta House, an an all volunteer organization and all its sponsors supporting this now third annual event. Matthew Gullotta asks that each participant commit to raising at least $100. The event will take place on February 15th, 12 p.m.-12:10 p.m..

There’s a happy pay off too for each courageous plunger: “When you raise $125 it gets you a long sleeved event shirt!” says Gullotta.

In fact, there are a whole range of benefits to becoming a sponsor, too, at the $50, $250 and $500 and up levels (which includes a three minute talk about your business at the event!). Find out more by emailing your team or businesses name, or your individual or family interest to gullottahouse@gmail.com. To sponsor this event or a person, visit www.gullottahouse.org

Please note: Everyone must wear sneakers or water shoes and sign waivers. Costumes are allowed. Most important: HAVE FUN!

Grace Bennett is founder, publisher and editor in chief of the Inside Press since 2003. 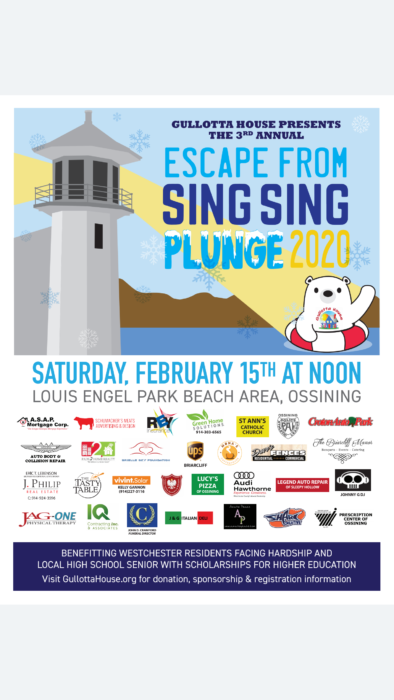 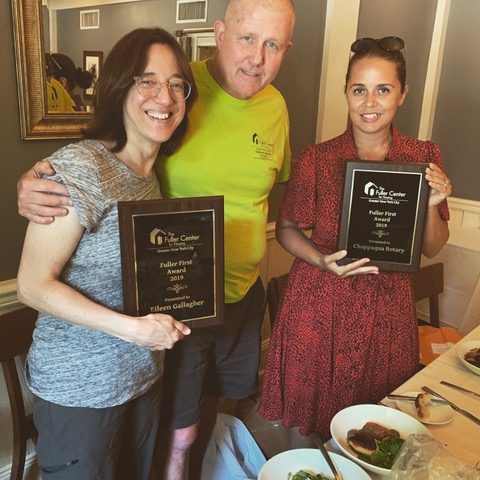 Courtesy of the Rotary of Chappaqua

4. “Ringing in the New Year” Celebration

7. Members of all ages and backgrounds who believe in “Service Above Self”

8. Host to over 30 informative guest speakers a year from within the community and beyond

10. Part of Rotary International, a global network of over 1.2 million people of action including neighbors, friends, leaders and problem solvers working to better our world