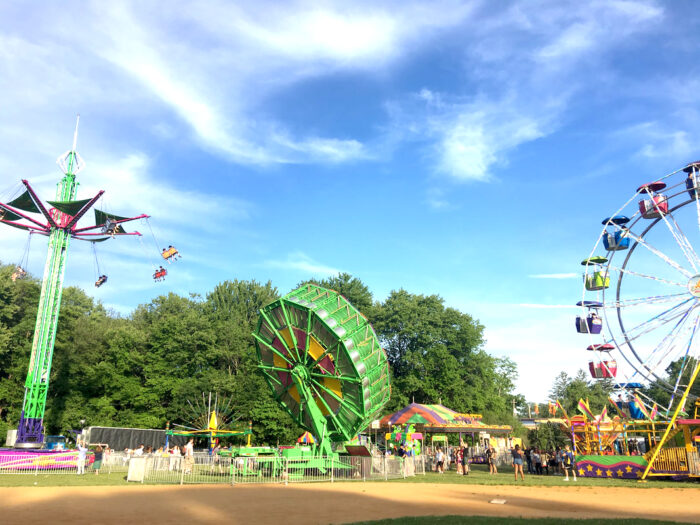 The Armonk Lions Club’s Fol-de-Rol is back after a two-year hiatus.This fun-filled family event, to be held in Wampus Brook Park and on Hunter Field on June 2nd to June 5th, will feature rides, entertainment and music as well as food and merchandise vendors. Something for everyone is promised!

This past year the Club faced a major decision. As President Doug Martino remarked, planning for this upcoming Fol-de-Rol almost didn’t happen. “Because of dwindling membership, the Armonk Lions were literally days away from shutting down,” said Martino. “Had that happened, the Fol-de-Rol, a 45-year tradition, would have died forever. We simply had too few members to do the planning and running of such a large event.”

Armonk is a small town with a strong community spirit and word quickly spread about the fate of the Fol-de-Rol. A few days after a meeting in early November in which members discussed closing down the Armonk Lions Club, Matt Milim, who lives in Armonk and was recently elected to the Town Board, asked to meet with Club members. He brought a number of people to the meeting who were passionate about wanting the Fol-de-Rol to continue and who were willing to join the Armonk Lions Club to help make that happen. By the end of December the club was revitalized with enough new members to plan and run the 46th annual Fol-de-Rol. 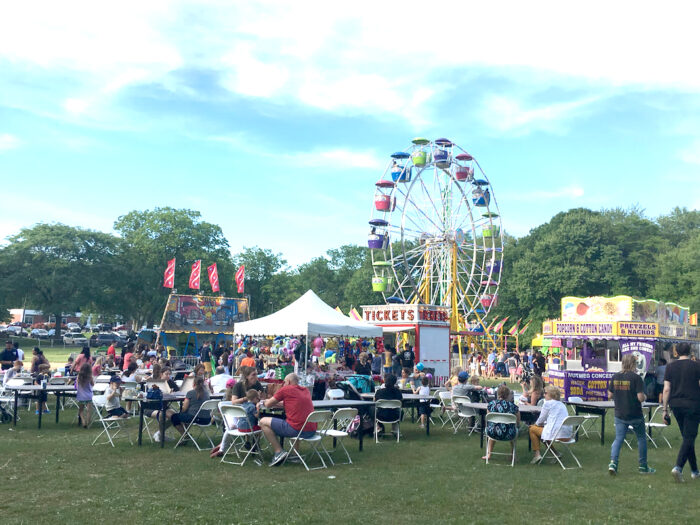 In early January, Club members, both new and old, swung into acton. The key to the success of the Fol-de-Rol is finding vendors, who provide rides, entertainment, food and merchandise. As a result of this effort, the Lions Club has been able to line up new vendors and and create new entertainment ideas.

The Fol-de-Rol is more than a community event; it is the Armonk Lions’ annual fund-raiser in which 100% of the proceeds are donated to local organizations and for people in need. Over the years, the Armonk Lions have funded many projects in North Castle: the Gazebo and Lions Way Bridge in Wampus Park, town camp scholarships for local children, dugouts for the ABL, defibrillators for North Castle Police and Fire Departments, and the NC4 disaster relief trailer.

In Westchester County, it has donated to the Open Door Medical Clinic in Mount Kisco, Guiding Eyes for the Blind, and Puppies Behind Bars. It has also contributed relief monies through the International Lions Clubs. 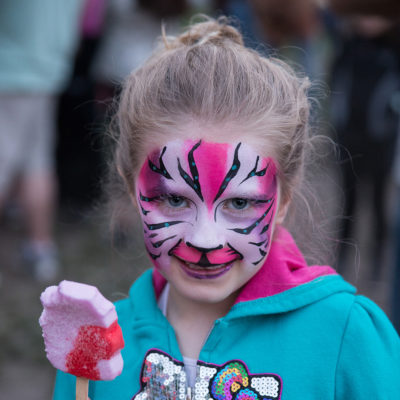 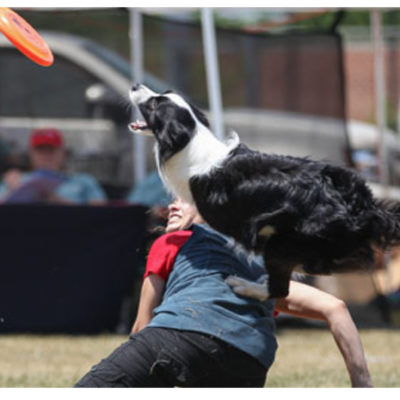 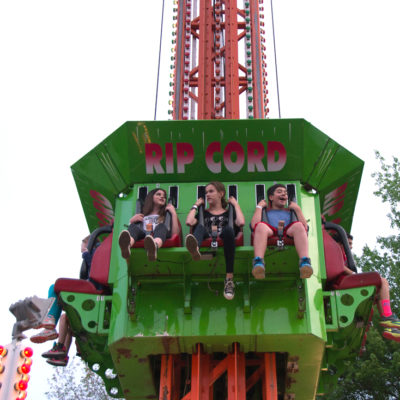 Feeling nostalgic for the good old days? Come to the 44th annual Armonk Lion’s Club Fol-de-Rol and Country Fair, June 7-10, and give your family an experience to remember!  Enjoy a pie eating contest, face painting, pig races, carnival rides and midway games! Visit food and craft vendors and check out musical entertainment. The fair is held in Wampus Brook Park, Armonk and starts Thursday night, June 7th with a DJ, rides and food from 6 p.m. to 10 p.m.   Rides continue Friday night from 6 pm to 10 pm. On the weekend, there will be craft vendors in addition to rides, live music and lots of other entertainment for the whole family.

The Armonk Lions Club is a volunteer service organization that runs the fair as its only fundraiser. All money raised is used to support local community organizations and projects, and to help people in need by donating to organizations like Guiding Eyes for the Blind and Meals on Wheels. The club also sponsors a scholarship for two deserving seniors from Byram Hills High School.  This year we are also sponsoring Puppies Behind Bars, training service dogs as companions for returning US Veterans.

Admission is free!  Tickets or a bracelet are sold for the rides. We also sell raffle tickets to support our service work, with prizes of cash, a TV, sports tickets, etc.  Raffles may be purchased through our website or in person at the fair.

Come for the food, come for the fun and come to support the Armonk Lions Club.  Hours are 6 p.m. to 10 p.m., June 7th and June 8th; 11 a.m. to 10 p.m. June 9th (rides open at Noon), and Noon to 5  p.m. on June 10th. The Fol de Rol is located in Wampus Brook Park, at Maple Avenue and Bedford Road in Armonk, NY. Visit ww.armonklions.org  or go the Armonk Lions Fol de Rol and crafts festival facebook page for more information. 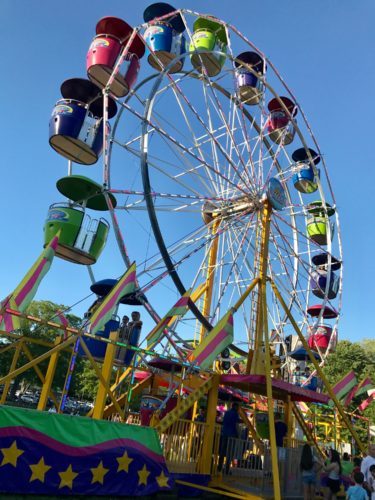 The distant thumping of music can be heard from the parking lot of beautiful Wampus Brook Park. As you approach, the constant beat gives way to the familiar melody of a popular song flowing from the fair’s DJ booth. As you make your way towards the lights, fun, and people, the comforting smell of buttery popcorn fills your nose, drawing you in even further. It is at the 43rd annual Armonk Lions Club Fol de Rol that I find myself walking through crowds of people: babies, children, adults, and grandparents, all enjoying the myriad of activities that you can find at the fair.

While parking, admission, and many activities are free, the Fol de Rol is the Armonk Lions Club sole fundraiser for community service projects and charitable causes; it’s motto is “we serve,” as Linda Trummer-Napolitano, the fair organizer, writes, “All Lions Clubs belong to the International Lions and all raise funds for various community organizations to meet the needs of others in times of hardship or disaster.” The fair features over nine carnival rides, which require tickets or rides bracelets that can be purchased at the ticket booth.

There are also different events, such as “the ‘Clydsedale’ type horses on Friday night, antique cars on view for Saturday morning; there are racing pings in the rides area that will be performing on Saturday and Sunday; on Saturday, the DYNAMO Dogs from Maryland are performing–these rescue dogs have been trained to do an amazing variety of tricks and have performed all over the country,” says Trummer-Napolitano. The fair has over 60 craft and food vendors, ranging from Greek cuisine to your typical carnival hot dogs; there is also a face painter, a henna tattoo artist, and a body glitter artist. Other than a DJ, the fair hosts many local artists performing in a wide variety of genres: jazz, 80s rock, pop, and acoustic folk–on Sunday the middle school band performed at noon.

I asked Trummer-Napolitano what her favorite activity at the fair is, to which she replied, “I love to go watch the crowds and shop at the various craft vendors booths; we have a lot of local food vendors from the Hudson Valley, such as an olive oil vendor and a maple syrup vendor, and there are some really creative jewelry vendors coming this year.”

There is something for everyone every year at the Fol de Rol. Regardless of age, you are guaranteed to have a good time. Admission was free too! Best of all, you can make a difference and support your community by enjoying the rides and local vendors. See you next year!