Pleasantville, NY— It felt like far more than a simple ribbon cutting ceremony yesterday to celebrate the opening of the new A Seafood Market Grille on 49 Wheeler Avenue–directly across from the Pleasantville Pharmacy and immediately next door to Soul Brewery.

Comments by Pleasantville Chamber of Commerce and town and county public officials spoke of a ‘rebirth’ to the community in general following a pandemic year that brought unprecedented challenges to the business community, and of course, to everyone else too.

Standing proudly with those gathered were proprietor Yuliia Aquije, who lives with her husband Pablo and daughter in Hawthorne, and Chef Matthew Evans. In a separate interview, Yuliia told the Inside Press that she and Pablo had searched throughout the area for the right location, and were ultimately charmed by Wheeler Avenue.

The store’s opening however had been delayed for six months due to Covid-related challenges.

Expressions of relief and encouragement to the couple and to ‘Chef Evan’  were freely shared.

“We want to be the wind behind your sails… in the friendly environment of 10570,” said Pleasantville Mayor Peter Scherer. “We know what a difficult time it was to get here.”

Westchester County’s Shari Ascher, representing George Latimer, noted: “It’s thrilling to have some good news that we are moving in the right direction.”

“I’d love to be at a new ribbon cutting every day in this county,” Ascher said, noting Latimer’s strong record of support for the business community. “We urge residents to support local business.’

Mostly, it was a jubilant mood under a bright sun and crystal blue skies. PCTV’s Nick Antonaccio, who opened the ceremony, welcomed the new owners and expressed his enthusiasm for the selection. Along with a full array of fish and seafood items, the new grill offers select prepared foods, such as rice and noodle-based dishes, an already popular soft shell crab sandwich, and non-seafood items too, such as pulled pork Cuban sandwiches. “There’s something for everyone,” exclaimed Chamber board member Margaret Cunzio who presented Yuliia with a Certificate of Appreciation. Cunzio invited attendees to try a fresh shucked Virginia Oyster from Chesapeake Bay, and it was indeed delicious paired with a delicate minuet sauce by Chef Evan.

Village trustee and board member Paul Alvarez stated that the town welcomed the new addition “with open arms… anything you need,” he said.

Chamber President Bill Flooks warmly welcomed the couple too to Wheeler Avenue which he called “the heart of the village.”

In a separate conversation inside the Soul Brewery, another exciting new establishment opened recently by Allen Wallace, Peter Scherer noted that Wheeler Avenue, and Pleasantville at large along Washington and Marble Avenues, have already become “known more and more for our restaurant scene,” but with this grill and other specialty shops opening in town, food specialty offerings to residents are becoming increasingly varied too.”

A Seafood Market Grill will be open every day of the week from 9-7, and on Sunday, 9-4. “We can take orders online at the website and have curbside pick up too,” shared Yuliia. When asked how her business’s opening has been faring since early April, she said. “People are coming in, little by little. We hope more people find out that we are open with great, fresh seafood here!”

The Pleasantville Chamber of Commerce pulled together resources to make sure its members and community are receiving the most current and reliable information regarding COVID-19 (Coronavirus).

We will continue to monitor the situation and keep you updated. If you have information that you’d like the Chamber to share on the special procedures and precautions that you have put in place email us here.

On May 31, Pleasantville children and parents alike crowded the streets, excitedly watching our volunteer firefighters and their fire trucks parade through the town in the annual Fireman’s Day parade. However, being a volunteer firefighter isn’t just parades and celebrations. Our local volunteers work hard every day to ensure the safety of their community members. Whether they’re responding to a house fire, a carbon monoxide detector going off, accidents, or downed wires after a storm, the brave Pleasantville volunteer firemen selflessly sacrifice their time, and often safety, to keep their friends and neighbors out of harm’s way. Each year, the parade presents a way for the community to honor the men and women who risk their lives to keep everyone safe.

This year, the parade coincided with some local news pertaining to helping spur volunteer efforts. In order to make volunteer firefighting an equal opportunity for all who choose to be involved, NYS Senator Pete Harckham recently announced the passage of two new bills by the New York State Senate. These bills, S5418 and S5419, both aim to protect volunteer firefighter disability benefits in order to make sure that they will have access to critical disability benefits and medical treatments warranted by their duties. It is important that the NYS Senate passed these bills as it acknowledges the peril volunteer firemen put themselves into every day in order to save the lives of others. If you are interested in becoming a volunteer for the Pleasantville Fire Department, applications are available online through their website, pleasantvillefire.org. 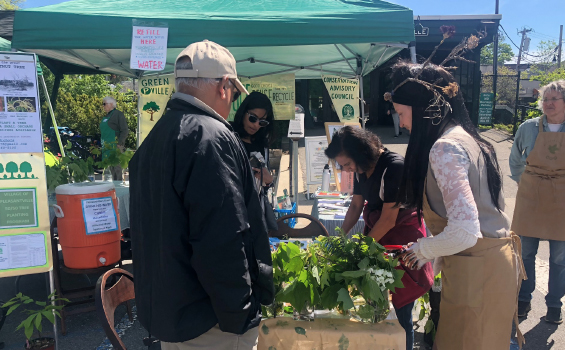 The Conservation Advisory Council of Pleasantville (CAC) is a local committee dedicated to the preservation and improvement of our village’s beautiful natural environment. Made up of knowledgeable members with a variety of strengths and skill sets, council members pool their collective talent, make recommendations, jumpstart projects or otherwise help to assist the Village Board with matters regarding the preservation and protection of the town’s natural resources.

This may sound daunting, but by tackling specific challenges, real progress is made. Individual members share their knowledge and skills on everything from wetlands mapping to clean-ups and sustainability efforts–all of which help maintain the beauty and integrity of our village’s natural surroundings.

As chairperson Helen Meurer puts it, the CAC exists to “protect natural habitats and water quality” and is made up of “members [who] are enthusiastic about the wonders of nature.”

Many in the community embrace the Conservation Advisory Council and recognize its work as a very valuable asset to the town. This ensures that Pleasantville’s natural environment is always being considered when making town decisions. Essentially, their job is to advise the Village Board how potential upcoming projects and initiatives may affect the landscape.

Meurer explains that its function “offers checks and balances with regard to building proposals to ensure that our environment will still support wildlife and allow proper filtration of rainwater.”

New ideas and projects are constantly being brought up by and executed by the council.  In just the past three years, the CAC has mapped and submitted an open space inventory to the Village Board, created a new wetlands map, hosted Saw Mill River clean ups, and introduced a 50/50 tree planting program to help residents get a tree planted in their yard for half the wholesale price- just to name a few.

‘Tree Walk’ in the Works

Currently, the council is working on a tree walk at Nannahagen Park as well as a tree photography competition in which the winning pieces will be shown in a gallery to celebrate the diverse, beautiful trees all over the town.

According to Meurer, the hope of these two projects is to not just tell people what they shouldn’t be doing and what they’re doing “wrong,” but to instead help them appreciate and celebrate the environment around them. She says the projects’ aims are “to help people appreciate and love their trees,” as well as to “celebrate our local trees both for their beauty and the health of our environment.”

Council meetings are open to all community members which presents a great opportunity to get involved. It is a great committee to invest time and interest in. They are held on the third Thursday of each month at the Village Hall.

The council’s efforts to preserve and protect our local environment range from educating the community with fun activities like “guess the tree” on Pleasantville Day to getting composting bins and rain barrels placed throughout the town.

They also strongly encourage local tree planting and maintenance through their 50/50 program, in which the Village will share the wholesale cost of a tree and help to plant it too! The CAC is currently encouraging residents to participate in their photography competition as an easy way to get involved and get outdoors!

To enter, follow @pleasantville_village on Instagram and tag them in your tree photo with the caption “I love #mypleasantvilletree because…” Entries are accepted until September 1st! 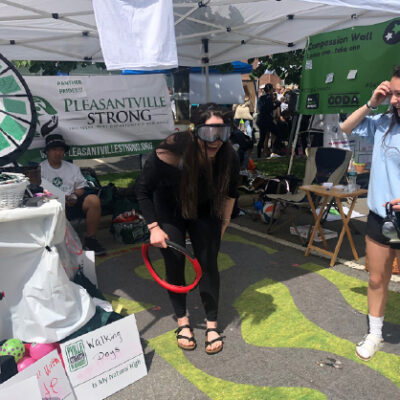 The town of Pleasantville was awash with smiles and laughter, the sounds of live music, and the unmistakable scent of funnel cake and popcorn as the community celebrated yet another successful Pleasantville Day festival on Saturday, May 18th. A tradition lasting over thirty years, Pleasantville Day is not only a day of fun and games for the children, but also an important reminder to their parents of the joys of living in a small, close-knit community. Filled with colorful booths, carnival rides, dance showcases, and an impressive selection of food, there truly is something for everyone. This year, the festival boasted a juggling stilt-walker, human statue, and giant inflatable slide in addition to its usual activities to keep it feeling new and exciting despite its long run in the town.

Soon after arriving at Memorial Plaza, children of all ages were gleefully laughing and clutching onto their cotton candy as they played games and won prizes. But Pleasantville Day isn’t just a day for the children–parents enjoyed themselves equally, chatting, enjoying the live jazz music, and entering raffles to win gifts provided by local businesses. Even the pets of Pleasantville seemed to be having a good time with no shortage of furry faces. Besides the expected endless stands filled with games and crafts, Pleasantville Day also hosted a diverse number of tables this year, including a sports equipment swap, town conservation awareness booth, and a variety of fundraising tables for Pleasantville High School clubs. Pleasantville Day is truly a cherished day in the community which provides a unique opportunity for townspeople of all ages to come together and enjoy a day of fun and celebration. This event has become somewhat of an institution in the village, a powerful reminder of the beauty of living in a tight-knit, small town in which every face is a familiar and friendly one. In essence, Pleasantville Day is an embodiment of all the values Pleasantville aims to encapsulate: friendship, fun, and most importantly, community. 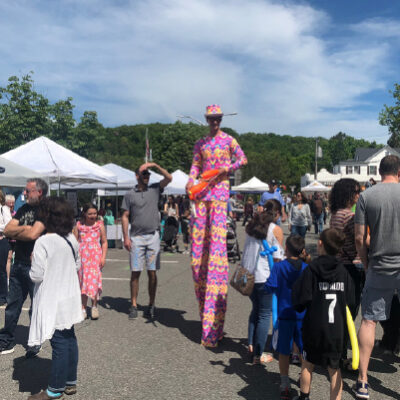