Westchester County Executive George Latimer announced on Monday that The Westchester County School Reopening Workgroup has released an eight-page “Frequently Asked Questions” guide that will assist the County’s school districts in addressing the health, COVID-19, and contact tracing requirements for their schools to reopen safely this school year. 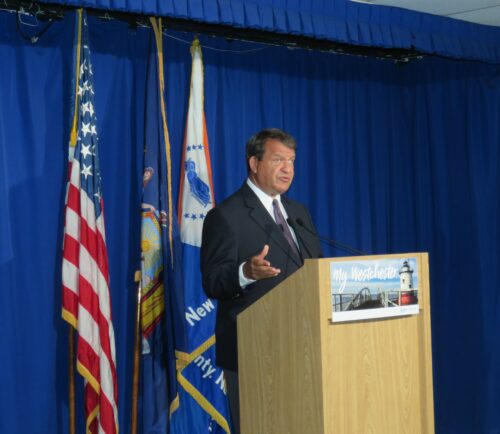 Being one of the “major tasks” ahead of us, Latimer stressed working with school districts in reopening is a responsibility the county will do their best to coordinate. As of last week on August 7, New York Governor, Andrew Cuomo, announced he was authorizing school districts to open. This means 44 of the schools in Westchester are approved to reopen their doors to students in September.

“Each of these schools had to submit plans for what reopening would look like with a host of different protocols. And those protocols involve not just what you do physically to keep people safe, but how you intend to educate children,” Latimer explained.

Although the County Government does not directly control school districts, they play a role in helping implement elements of the school district’s plan. Thus, the working group was created, the County Executive states. The Workgroup has been created to provide a direct link between the County’s health and facilities departments to school administrators, staff, faculty, students, and families as they prepare for the start of the school year.

“The most important thing for all of us is to create a safe and effective plan to best educate our students this fall,” Latimer states. “I am proud of the fast and efficient guidance the County and this working group has provided to assist our school district by making this a reality. By creating these FAQs, we are serving the proper role of government: assisting those who fall within our mandate of public service.”

The FAQ’s are part of a larger effort by the Workgroup which has already provided four workshops and answered dozens of questions from school officials and medical staff.

As for the complexity in reopening schools, Latimer acknowledges this is a heavy situation to deal with. “It’s complicated in a school setting. We have the complications in the school setting with younger children. For kindergarten, first, and second graders, it’ll be tough for them to keep their masks on; it’s going to be tough for them to remember who they interacted with.”  Regarding older students, Latimer said, “While they’re capable of understanding what you’re saying, they have to give it the same weight and importance. And one of the issues we’ve had to deal with in this society at large, outside of the school setting, is how do 16, 17, 18-year-olds react when asked to change their lifestyle.”

Not only within the schools, but reopening will also have a large effect on society as a whole. “In opening schools, we are opening a major entity within our society. It’s an economic impact. It directly involves other types of decisions that have still yet to be made.” says Latimer.

“There’s a real dynamic here involved with the schools. This is the biggest thing we’re opening, probably since restaurants. But even restaurants are still voluntary. School, if school is open and is mandatory, you have to participate. And we’ll see how it plays out. I’m hopeful, but the jury is out until we get into it, and I do think we’re prepared. If it doesn’t work, however, we’ll shut it down–I think that has to be your mindset.” the County Executive concluded.

As for the statistics, there are 434 Active cases now in Westchester, a reduction of almost 30 from the previous week, 92 from the previous month, and over 700 from the peak in cases in April. The testing has been “consistent and sufficient,” according to Latimer, with 3000-4000 range of individuals being tested per day. There have been 428,800 people tested, which is well over 40% in the Westchester area, and 1/10 tested have come out positive.

“This is a good sign,” says Latimer. “The statistics are not so you can write them down in a little book; it’s to show that the level of infection here in Westchester County has dropped. And that’s important because here in Westchester, we’ve opened restaurants, retail establishments, beaches, offices, and throughout all of those different changes, we’ve been able to maintain a decreasing level of invention and impact.”