The NCHS kicks off their spring calendar with Curator-led Talk & Tours of the exhibition, New Castle’s Carrie Chapman Catt & the Women’s Suffrage Movement. 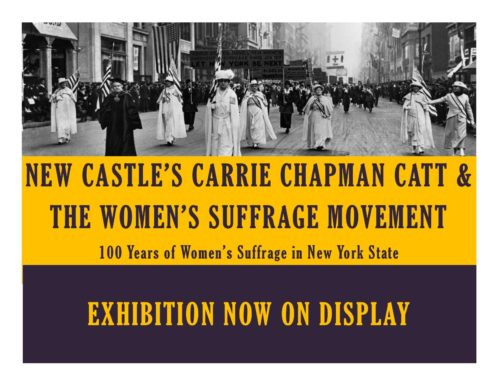 The exhibition features contemporary historic photographs from Westchester County Historical Society, the New York State Museum, and the Library of Congress; a 1917 petition in support of women’s suffrage, including over 800 signatures from local Westchester County women (on loan to the NCHS from the Ossining Historical Society); an Evelyn Rumsey Cary “Woman Suffrage” Poster; and several replica artifacts related to women’s suffrage, including “Votes for Women” sashes, pennants, buttons, and plates. The first Curator-led Talk & Tour will take place on Thursday, March 15th at 1 p.m. and 7 p.m. Visitors may also schedule private led tours of the exhibition through the end of May 2018.

On April 22nd, from 2 p.m. to 4 p.m., the NCHS invites its members and the public to its 52nd Annual Meeting.  This year’s meeting will be held at the new Millwood Fire House. At the meeting, Town Historian Gray Williams will present a brief history of Millwood, New York, with special focus on the Putnam Division of the New York Central Railroad. 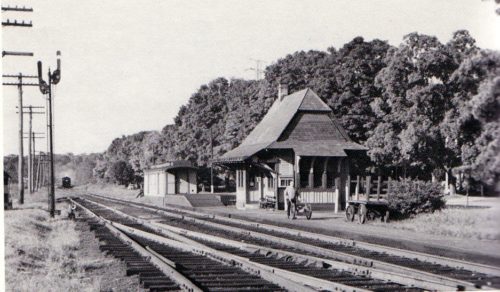 Later in April, the NCHS teams up with the Rago Arts & Auction Center to offer an Antiques Roadshow-style Appraisal Day at the Greeley House. On Saturday, April 28th, visitors are invited to have their family heirlooms or garage sale treasures appraised at the Horace Greeley House. The appraisals will be conducted by four special guest experts (fine art, jewelry, silver, and general).

If you would like more information regarding these programs, or to register for an event, please visit www.newcastlehs.org or contact NCHS Executive Director Cassie Ward at director@newcastlehs.org or 914-238-4666.

According to The American Presidency Project, only 54.87% of eligible voters placed a vote in the 2012 presidential campaign. Many Americans today are not voting, but here’s why each of us should.

The United States is a democracy, which means that each and every citizen who is age 18 or older has the right to vote for the candidate they want as their President. However, if enough of us aren’t voting, then can this truly be called a democracy?

As an American citizen, it is your duty to vote for the leader you want to represent your views and goals. By not voting, you are throwing away your right as a citizen. Because many are under the impression that “their vote doesn’t matter so what’s the point,” plenty of Americans tend to lay back and let others do the voting.

However, if every person who believed that their vote didn’t matter stood up and decided to vote after all, we’d have close to 100% participation in the upcoming election, which is much more than having “no impact” as many tend to believe.

Voting is especially vital to us here in Chappaqua because one of the presidential candidates happens to live in our town.

Yes, Hillary Clinton is our neighbor, and, as Chappaqua is primarily a Democratic town, it is important for us to vote for her, the Democratic candidate, in this election. Many people in Chappaqua support Hillary’s ideals, and what better way to show our support for our neighbor than to place a vote in the elections? It is really unwise to rely on everyone else to vote for Hillary because, as much as it may seem so, she will not simply become president “no matter what.”

If each individual person does not get out and vote, no one will make any progress, and this country would certainly no longer be called a “democracy.” Addressing the situation of getting more people to vote can be simple: Explain to others that their vote matters and that casting their vote helps benefit Hillary greatly. She, in turn, helps us by supporting our views and making them a reality. Help support our next door neighbor by voting in the next election.

Alina is a junior at Horace Greeley High School whose political knowledge extends to conversations (which sometimes turn to heated debates) with her friends. She moved to Chappaqua fairly recently, but has already seen Hillary.