“Every Train Tells a Story”

Chappaqua, NY–Have you purchased yours and your family’s tickets yet to the quintessentially adorable train show that’s the talk of the town in New Castle?  The Great Holiday Train Show at the New Castle Historical Society in progress through January 9th was an idea initially brought to the NCHS by Chappaqua’s Richard Diefenbach, a New Castle Historical Society trustee and a trained collector, as is his son, Michael, a senior at Archbishop Stepinac High School in White Plains; the family immediately offered their classic, turn of the century cars of the New York Central Railroad Company–all in all, fine trains with which to kick start a train show.

“Rich had suggested that we do a train show,” shared Georgia Frasch–yes, that Georgia Frasch of Chappaqua Moms’ fame, but also the current vice president of the board at NCHS, who gave the Inside Press the lowdown of how the show was brought to New Castle, along with a tour of the train show.  Initially, because of Covid, the idea got tabled, she explained.

“In September, however, we started talking about it again as things were loosening up with Westchester becoming more and more vaccinated,” said Georgia. “I said to Rich, ‘You know, let’s consider maybe we can finally do this train show.”

Added Rich: “The idea for the train show came from my son 10 years ago when we would visit the Nauset Model Train Show in Orleans, MA on Cape Cod.” As a new trustee, he told the NCHS board a train show would draw the community and its families together.

“My son Michael was instrumental in helping me set up the tables along with Frank Shiner, and Tom Childs. It was great to work with Georgia Frasch who listened and helped me brainstorm ideas for the show and used her social media to get donations for trees, and loaner trains. It was a collaborative effort,” he said.

“The result speaks volumes – smiling faces of children and parents! People who never knew what the Greeley House have begun to enter its doors. It has been pure joy for the first time in my more than 26 years in this town. My hope is we will continue the tradition moving forward.”

Initially, there was Rich’s beautiful train set. Next stop, while at (Chappaqua resident) Frank Shiner’s house picking apples from his orchard for Intergenerate–community gardens that feed 50 households for Neighbor’s Link–Georgia told Frank about the show. He quickly hopped on board!

“And then I put something out on Chappaqua Moms: ‘Anybody have trains?’ and the flood gates opened! We had more trains than we could possibly use!”

And voi la, or perhaps, Toot, Toot–as resident train collectors/proud owners caught the news and considered the grand possibilities, the show grew, and grew, with more than a dozen fascinating exhibits now in place to enjoy and stir young and old imaginations alike.

On the tour, you will receive a cool booklet about the show with colorful details about each train exhibit, with a tip of the conductor’s hat to those residents who graciously contributed to the holiday train show, each adding to its GREAT-ness.

There is significant involvement from ‘beyond New Castle,’ too, including that of “a wonderful train store in Ardsley called Tom’s Trains,” said Georgia. “In fact, we did a little poster for him. He’s a lovely gentleman and during Hurricane Ida, he got wiped out–over $50,000 worth of one-of-a kind merchandise was lost. We reached out to him… he has been a great, great partner… he was a big help! As was Chris Fresiello, who works with Tom a lot, and who contributed one of the exhibits, too.”

There are group tours, non-gratis, happening, as well.

“The Chappaqua Library’s Cathy Paulsen works with a group of disabled adults at Ability Beyond, for example, and we are offering them a day here. Another private tour is taking place for a young boy who is going through chemotherapy, and for his family.” 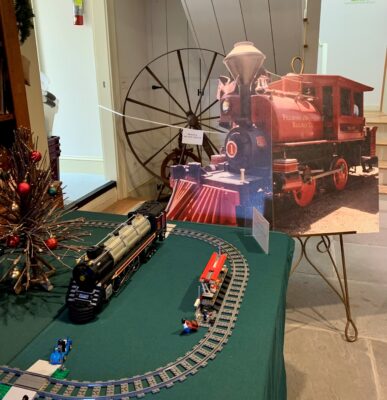 We discussed Georgia’s motivation for the show. “I was really inspired by the Chappaqua Children’s Book Festival and Community Day–seeing parents at both with their children because it felt as if things were returning to a semblance of normalcy.”

And beyond that… “For me, this train show was experiential: it was family, it was community, it was nostalgia, it was children; we have so many new families with young children. I wanted a way for new families to make memories and feel like this is something of value and, in fact, that is exactly the response we’ve gotten… Every train tells a story, and when you look inside the booklet, you’ll see all the people who have lent us trains.” 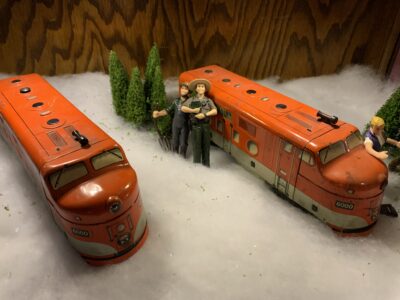