It’s hard for me to put into words the feelings I have for the place that was a huge part of growing up. Lange’s Little Store and Delicatessen, the small, simply furnished family-oriented deli that my family has frequented since the very beginning.

I am proud to be a second-generation Lange’s-goer. My dad grew up in Chappaqua and his family ate there. I’ve been going for as long as I can remember.

If you aren’t the kind of person who likes to run into everyone you know, I wouldn’t recommend going to the Little Store at lunch time on any given weekend.

I however, live for the social scene. Although my dad doesn’t like to admit it, I know it’s his claim to fame. We can’t go there without seeing someone from his childhood. An old friend, coach, father of an old friend. You name it, we see it.

But the one person I never tire of seeing is the legend himself. The man behind it all – Mr. Lange.

Sweet. Funny. Caring. Kind. If there was a Mad Libs page for this guy, those adjectives would fill the page. I’ve never met someone like him. I think of him and see a man with a big smile and open arms.

When my family eats there, he walks upstairs and joins us. We bond over our love for Cape Cod and dachshunds. In high school, he would ask about my soccer games and my sister’s basketball games. He also gives great advice.

Lange’s is a place that many people find comfort in. The hot plates and breakfast sandwiches too.

When my grandpa died, Mr. Lange was there for my family. Shortly after, my parents found platters of food atop of my grandpa’s car. No note. No ringing the doorbell. No nothing.

When my dad went solo one Saturday because I was sick, he noticed and sent my dad home with a large container of chicken noodle soup.

And when our town experienced a tragic loss two summers ago, Lange’s seemed to be a place of comfort for all. After the funeral, my sister and I felt that we needed a Lange’s sandwich to make us feel better. I guess it was a common thought. We saw many of the same faces eating sandwiches that we had seen an hour before sitting in the pews. Including members of the Lange family.

In my eyes, it’s the staple social hub of Chappaqua and a place that embodies what it means to be a community.

I see younger families come in after AYSO soccer games on Saturdays and think of my younger self. I see the oldcomers and think of how Lange’s has been the go-to lunch for me and my cousins whenever we all ate at Grandma’s. Turkey, coleslaw, Russian on rye bread. The Klein sandwich.

Going to college meant no more Lange’s. I was back three weeks after I left, sitting in the dining room with my parents. Mr. Lange asked why I was back so soon. My response? “I needed my Lange’s fix.”

Although the people, decor, my order and myself may change. Two things never do: Mr. Lange and my beverage selection.

Story and Photo By Karen Talbot 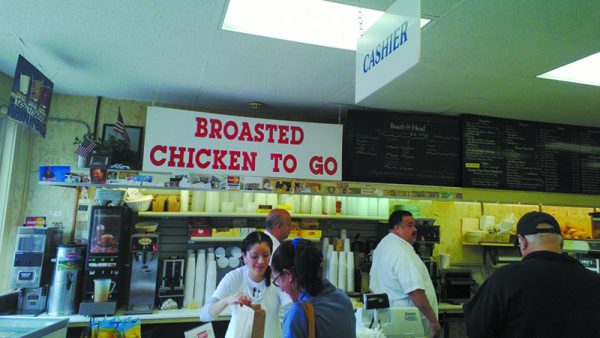 This special deli has earned its recognition as a popular dining “institution” in town. Lange’s is a 50-year success story; its casual atmosphere and very good food attracts diners from in and around Chappaqua. Be ready to talk about the latest issues confronting our town, too, if you’re an “issues oriented” citizen. Lange’s Deli is well known as a favorite hangout for hungry local political figures from current and former Town Board members…to President Bill Clinton.

The most popular offering for Breakfast is bacon, egg and cheese on a roll. For lunch, favorites include the Fresh turkey, Russian dressing and coleslaw on rye bread, or a chicken cutlet on a roll with bacon, mozzarella and roasted peppers. A standout dinner offering is Broasted Chicken, cooked in a pressure cooker, instead of being roasted–an interesting and tasty approach–which you can order in pieces with yummy sides: roasted or mashed potatoes, rice or vegetables. Even though Lange’s is closed for Thanksgiving and Christmas, they do lots of catering for the Holidays…Holiday cookies, fresh carved turkey, etc., a great option if you prefer not to cook a whole turkey with all of the trimmings.

Karen Talbot is a Westchester-based personal shopper and restaurant reviewer. The love of cooking runs in her family! Karen’s son Alex and his wife Aki Kamozawa started a food blog “Ideas in Food” in early 2000, and they have just opened “Curiosity Donuts” in the Stockton Market in Stockton, New Jersey.