There’s a new Chief in town, but New Castle’s new Police Chief James Carroll is hardly new to New Castle. Carroll was sworn in on June 28th upon the retirement of Chief Charles Ferry. “We chose Jim Carroll based on his experience. Chief Carroll has more than 15 years of police supervisory experience. He has been, and will continue to be, an asset to the Town,” said Town Supervisor Robert Greenstein about the Board’s decision to promote Carroll.

Carroll lived in the Bronx until he was five years old and then moved to Dutchess County where he still lives. He has a Bachelor’s degree in Business from Marist College and worked briefly as a claims adjuster until he began his law enforcement career in April 1990 as a Dutchess County Deputy Sherriff.

In October 1993, Carroll joined the New Castle Police Department as a police officer. He trained new police officers for five years, was promoted to Sergeant in 2004, and then Lieutenant in 2016. “I didn’t know that I wanted to be Chief. I always wanted to move up in the ranks because I thought I could help shape the department. The further I got up, the further I wanted to go,” says Carroll.

Vicki Bergstrom whose family owns Lange’s Little Store has known Carroll since he started in New Castle. “It’s nice to see him rise through the ranks. He’s always been a great part of the community.”

“Service is our goal and primary function,” says Carroll. “I’d like to make this town the safest, and provide the best possible police service in the County or anywhere.” He is proud of his accomplishments to date that include increased productivity of traffic enforcement and community checks. “I want people to know that if they have a problem they should call. I tell the officers that if the phone rings I want a police officer to go speak to the caller.  Sometimes it’s not a police matter, but we can talk to them and maybe steer them in the right direction, and that helps.”

Strengthening Relationships in the Community

Carroll is pleased with his good relationships with fellow first responders. “Jim has always brought a sense of calmness to his role as a police officer and his presence at emergency scenes is not only comforting to the residents, but the first responders as well,” says Chappaqua Fire Chief Russell Maitland. “We are very lucky to have someone like Jim at the helm of our police department.”

Carroll has also developed a strong relationship with the school district. Amy Kaiser, a Chappaqua teacher met Carroll when she was Greeley’s faculty advisor for the annual Relay for Life.  “For the first time, we decided to hold the event at the Bell field, which we knew would require lots of support from our police department. Lt. Carroll was totally supportive and a true pleasure to work with.  He and his officers were on-site throughout the evening, ensuring the event was safe and successful.”

A priority for Carroll is to have full-time school resource officers, one in the high school, one in each middle school, or one for both middle schools, and he’s working with the school district to get that done.

“We’re here as a resource to help and guide. We want to have a relationship with students so they feel comfortable and can go talk to an officer. If you do it with the kids when they are young, it helps with their social and emotional growth.”

As Chief, Carroll’s increased responsibilities include personnel selection, promotions and the budget. “You’re responsible for things that no one else is, and for everyone in the department from detective sergeants to the civilian staff.” He knows he will face some challenges. “Recruiting and selecting officers are more difficult these days. Fewer people are interested in going into law enforcement as a career.”

On the Horizon for the Police Department

Going forward, Carroll wants to improve their social media presence on Facebook and Twitter to give the department more transparency. “There are a lot of things we do that people don’t know about. We have a brand new police car, and we’ve reunited lost dogs with their owners.” He’d also like to build relationships with the officers and the community. “I want to do ‘Coffee with a Cop,’ ‘Coffee with the Chief,’ have an open house, and bring back the bike and motorcycle patrols.” says Carroll.

Carroll is grateful to his predecessor. “Chief Ferry has been a great mentor, co-worker, leader and friend. I wouldn’t be here now without him. It’s exciting to take over and put my own stamp on it.”

In a separate exchange with the Inside Press, Greenstein stated  the idea was raised when he met to discuss immigration policy with Chief Ferry a few weeks back in a public work session. “The Chief loved the idea and encouraged us to do it,” said Greenstein.

“We are not doing anything different,” Police Chief Charles Ferry said. “We are not going to engage in law enforcement activities solely based on somebody’s immigration status. We want people to speak up and not feel intimidated to talk to our officers.”

The Town created a flyer (see below) to distribute around town; Greenstein said its information would also be “printed on business cards for our officers to carry with them.”     — Grace Bennett 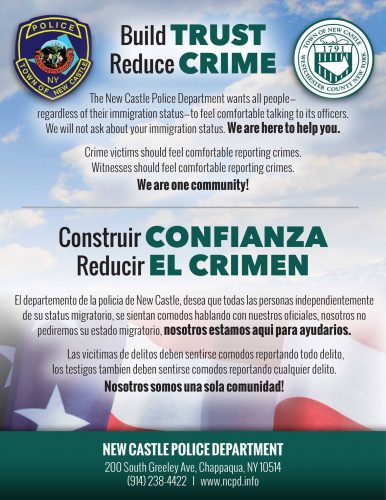