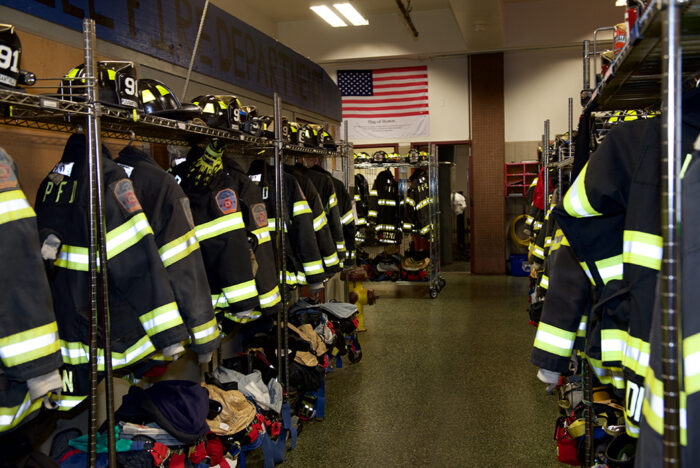 While we sleep soundly in the night, pagers go off and rouse the best and bravest amongst us. Answering the call of the horn, whether at 3 a.m. or 3 p.m., our volunteer firefighters step away from their daily lives to help their fellow citizens.

“I don’t think I’ve ever encountered someone on an emergency call that wasn’t happy to see us,” says Briarcliff Volunteer Fire Department First Assistant Chief Vincent Caruso, a 13-year member of the Briarcliff Fire Department. “It’s a great feeling when people see you and feel that help is here.”

Driven to Serve the Community

For some members, it’s in their blood and they are following in the footsteps of fathers and grandfathers.

“It’s our family tradition,” says Ossining Firefighter Rob Reaman of Rescue 14. “My grandfather was an ex-captain out of Chappaqua out of The J.I.D. [Bristol Engine Company], my uncle was an ex-captain out of Columbia Hose [Company] in Sleepy Hollow, my mom was president of Rescue 14 in Ossining, my father pretty much served everything and was in Cataract Hose [Company] for 28 years on Waller Avenue and then came back to Rescue 14 for about seven years now.”

Pleasantville Fire Chief Stephane Zapletal always had an interest in the fire department and joined as a teenager 19 years ago. “I’m a first generation firefighter but my wife’s family has four generations of firefighters and she’s the captain of the Pleasantville Ambulance Corps.”

Some members join after serving in a junior firefighter program during high school and others decide later in life that they want to give back to the community in this way.

Briarcliff’s Chief Caruso began his career working on the Volunteer Ambulance in high school. Finding it to be both noble and exciting work, he joined the Briarcliff Fire Department ambulance in 2006. “I planned on just riding as an EMT but soon found that I can be a fireman too. I did the training, got bit by the fire bug, worked my way up and it’s been a pleasure leading the group.”

Briarcliff’s Second Assistant Chief Arie Uyterlinde joined eleven years ago. After participating in a new employee orientation at Montefiore Medical Center geared towards caregivers, he was struck by the value of what these caregivers were delivering to patients. “As a corporate employee, this appealed to me and I wanted to contribute and have a positive impact on people’s lives. I saw signs up for volunteers just at the right time and decided to join. It’s really been a life changing experience.”

Pleasantville Fire Commissioner Dan Cultice joined in his forties. “I have a business in town and I wanted to give back to the community. It’s been very rewarding.”

The Challenge of Recruitment

All three departments struggle with the need for more volunteers. These departments were started when this area consisted of a primarily blue-collar population. This meant people stayed locally for work and were thus far more available to respond to calls than they are today. “With a good deal of our residents commuting to work in the city and not getting back until the evening, it can take double the number of members to cover the same amount of calls as it took when residents worked locally,” says Uyterlinde. “We need more members to ensure adequate coverage.”

“Anyone, no matter where you are, if you’re interested, go out and find your local fire department or EMS,” implores Caruso. “I don’t care where you live–I guarantee they need volunteers.”

“We will welcome and train anybody,” says Cultice. “I’m proud of our diversity. It’s a real melting pot. We have financial analysts from Wall Street, creative directors, architects, and blue-collar workers. We have men and women. It doesn’t matter if you don’t traditionally work with your hands.”

Interested candidates must be 18 years of age, have a clean record, and live or work in or near the town for which they volunteer. Recruits are trained in-house in the ways their particular department functions. Westchester County provides more substantial training that is required of all interior firefighters through the “Firefighter 1” training program at the Fire Training Center located in Valhalla. Interior firefighters can go into a burning building to extinguish fires or rescue victims. Some volunteers choose to help out as exterior firefighters whereas they can help out at the scene of an event but not go inside a burning building.

“Generally, people understand their own limitations and may dial back their functions on their own, if necessary,” says Uyterlinde. “Older members sometimes grow into more of a mentor role as opposed to a doer themselves. There’s a real tradition of having a lot of respect for your senior members because of the experience they bring to the table.”

“We have more than a handful of guys, each with 50 plus years of experience, and I regularly go to them for advice,” says Pleasantville’s Chief Zapletal.

All of the firefighters interviewed explained that they generally felt excited, rather than scared, upon getting a call. “You definitely get an adrenaline rush because it’s your job to start thinking ahead about what could be happening, what tools you’ll need, and what team you have that showed up at the fire house,” says Cultice. “We have a short amount of time to make the right decisions but we’re not scared because we’re well-trained and you know the firefighter next to you is going to have your back.” 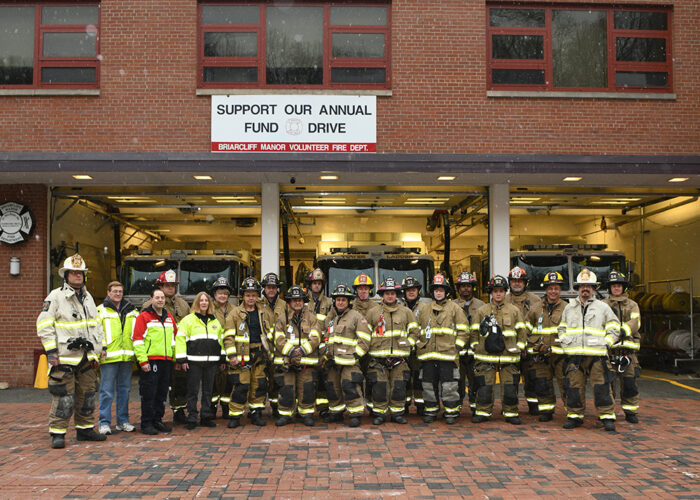 Many of the departments’ calls leave indelible images in the firefighters’ minds that they cannot reveal to the public, because sharing them would be insensitive to the victims involved.

The interesting ones, however, are fun to share. Uyterlinde recalls a Christmas eve call where the police and fire department were called to investigate a self-combusting package. A package that had been received a week earlier and had been sitting on a living room floor started smoking. The homeowner brought it outside where it proceeded to catch fire. Although firefighters expected to find a battery or explosive within the package, it merely contained a purse. The Cause and Origin team reconstructed the scene and determined that sunlight coming through a window was concentrated by a snow globe that had been moved near the package onto a small piece of the box. This burned a hole through the box, caught the paper packaging inside the box on fire, and then proceeded to burn from inside the box out. 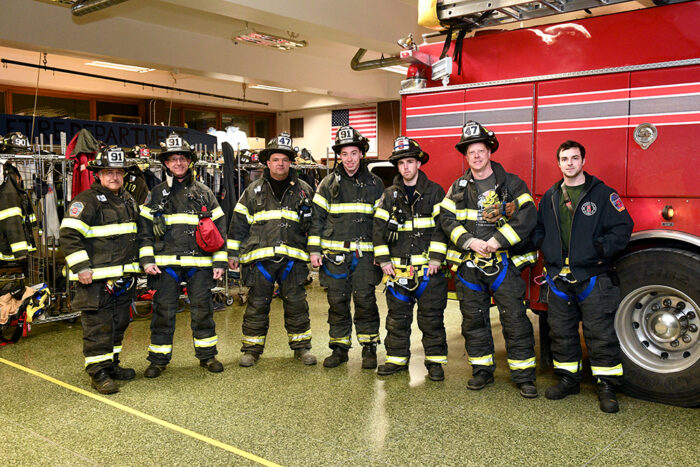 Zapletal recalls a fire where the hose supplying water was laid across the road and a car ran over it, bursting the hose and causing the water pressure to rip the hood off the car.

Relating some of his more enjoyable memories, Cultice recounts what it’s like to be one of the moms and dads running into the high school as a firefighter when an alarm goes off in one of the chemistry classes. “It’s always memorable when you see people in the community,” he says. 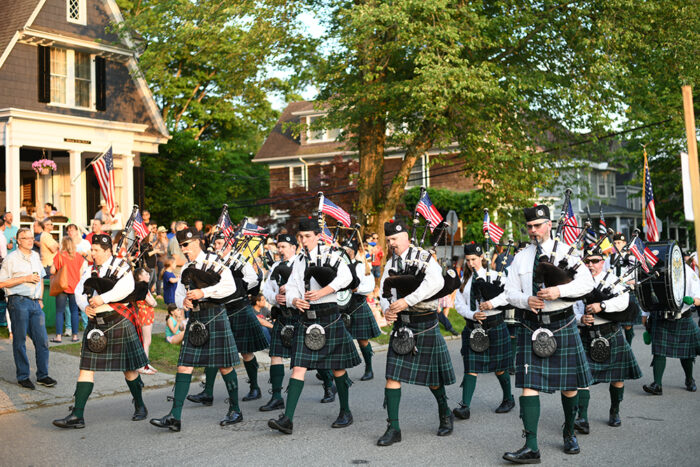 Each of the fire departments has a true appreciation for its history.

The Ossining Fire Department’s history stretches back farthest. As Westchester County’s first volunteer fire company, Washington Engine company was organized in Sing Sing in 1812. They purchased a gooseneck hand engine originally owned by the first organized fire company of New York City known as Engine No. 1. Today, the department boasts nine companies that operate six Engines, two Ladders, one Rescue Truck, one R.I.T. Truck, and one Spill Response Trailer. These nine companies were gradually added over the years to keep up with the growing population.

The Pleasantville Fire Department celebrated their 125th anniversary last year with a big party. When William H. Jahne organized the Pleasantville fire department in 1894, there were no streets, paved roads, municipal water, or sewer. The members used buckets of water to extinguish fires. Today, Pleasantville has four senior companies, a junior corps, and an auxiliary. 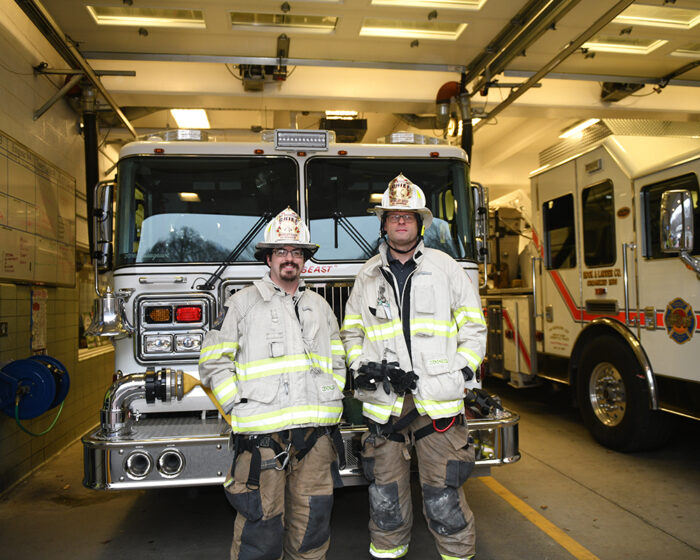 As a nod to their storied history, Briarcliff is one of the only departments in the area that runs white apparatus, as opposed to red. The trucks are white to memorialize the white horse-drawn dairy carts donated by Walter Law, the “Laird of Briarcliff Manor,” who owned a large portion of this area, to be used as fire apparatus.

Proudly affixed to the Briarcliff fire trucks are the antique bells that are handed down from truck to truck. Ensuring that the legacy lives on, every time they buy a new truck, the department makes sure to specify a custom mount to hold a 100-year old bell. 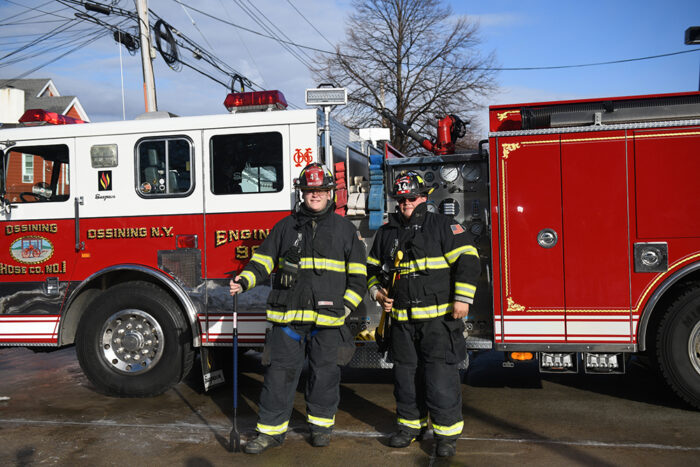 Neighboring Departments Support Each Other

“We have a great relationship with our surrounding volunteer departments,” says Cultice. “If there is a large incident, we will ask other departments to join us. We will provide back up to our neighboring departments at a fire or go to their firehouse in case they get another call. We work together, train together and invite them to our firehouse for large events. I’m very proud of that kind of organization and camaraderie.”

For more information or to volunteer, please head to the fire department’s websites. For Briarcliff, go to www.bmfd.org. For Ossining, go to www.ossiningfire.org. For Pleasantville, go to www.pleasantvillefire.org.