This Father’s Day, my family will be celebrating my husband, who is an amazing father. But I will also be thinking about my father, who passed away four years ago. 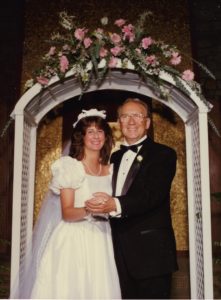 A little about my dad …

My father was born in Budapest, Hungary in 1932. When the Nazis invaded Hungary in 1944, both his parents were taken to Auschwitz. He was interned in a ghetto and lived with an aunt and a cousin, surviving under the protection of Swedish diplomat Raoul Wallenberg. His mother escaped during a death march, running away into the woods and eventually returned to Hungary. His father died at Auschwitz in the gas chambers.

My dad emigrated to Canada after the war ended with a group of Hungarian teens who had lost parents in the war–his mother eventually emigrated there, as well. He attended McGill University, met my mom who was visiting relatives in Montreal, and moved to New York when they married. He worked as an engineer and was able to get his Master’s degree from Columbia University at night.

Although the Holocaust certainly shaped my father, he tried hard not to let it define him and he rarely spoke of the atrocities he witnessed. He made sure to live life fully, enjoying good food, wine and music. He was quick to laugh, especially at his own brand of dad humor. My father embraced his adopted country and was deeply grateful for the freedoms and opportunities afforded him here.

Having been born in different countries and in different eras, my father and I saw things from different perspectives. He was a staunch Republican, whereas I am a liberal Democrat. When I was a little girl, he would take me into the voting booth with him and teach me the importance of voting, telling me how lucky we were to live in a democracy. I always vote and when I choose my candidates, I think of him.

Although I thought of my father as more of a math/science guy, he was also more than proficient in writing–in fact he was able to edit my essays in high school and correct my grammar–pretty impressive for someone whose first language was not English. He was my first Scrabble opponent–he never went easy on me. Although it took me two years to beat him, when I finally did, he was as excited as I was.

Despite losing his own father at a young age, my dad knew how to be a good father. He taught my brother and me how to ride a bike, fish, ice skate, swim and play chess, which was a passion of his. He got up in the middle of the night with me when I was sick and dried my tears when I cried—he couldn’t bear to see me sad. He taught me a lot about nurturing and made me feel safe. When he held me in the ocean when I was a little girl, I knew I would be protected against the crashing waves.

My father was thrilled to become a grandfather and was delighted to be able to attend all five of his grandsons’ bar mitzvahs. Although he was mostly confined to a wheelchair for my youngest son’s bar mitzvah, he did manage get up so that he could have one dance with me.

When he got sick with Parkinson’s disease, he rarely complained, accepting his fate with quiet grace and even humor. In fact, a few days before he died, a nurse asked him if he was comfortable, to which he replied, “I make a living.” And even in such a compromised state, he managed to chuckle.

I would be remiss if I didn’t mention my father’s thriftiness, which was legendary. If saving money were an Olympic sport, he would’ve been a gold medalist. He would turn off the air conditioner on summer nights and turn down the heat in the winter. To this day, when I leave a light on, I can hear his admonishment in my head. And every time I spend three dollars on my iced coffee, I am pretty sure he does a little roll in his grave.

I suppose that’s how it is with all the people we love. We never forget them or the things they taught us. We are reminded of them in the special moments and in the ordinary moments. They live on through the people they loved and who loved them back.

Happy Father’s Day to all the dads who are with us and to those who live on in our hearts.

Marlene Kern Fischer lives in Armonk and is a frequent contributor to the Inside Press.