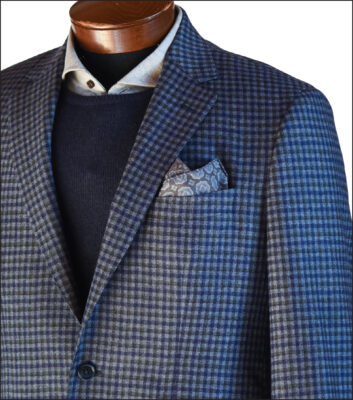 Entering Family Britches off King Street, one is struck by an inviting layout designed to offer a warm welcome. The four-room expanse of impeccably arranged displays of men’s and women’s fashion has, in fact, been welcoming customers to browse, try on and enjoy for many years. “For us, this is theater,” says Barry Mishkin of the 10,000 square foot “emporium of quality.” He and co-owner Rick Buggee have made their particular clothing house a home for Chappaqua for nearly 45 years by making sure the part they play is commensurate with the role of a great host.

Whether coming to someone’s house to provide an alteration, staying open late to accommodate customers or making sure something fits just right, says Mishkin, “We offer a family type service that no one else does.”

The duo first pulled up their Britches in 1970 because the possibility of setting themselves apart presented itself. “Fashions were changing, and we saw the need to provide more contemporary clothing,” said Mishkin.

Bell-bottoms going south at the time, Family Britches initially took the high road at the top of Bedford Road. “Chappaqua was a sleepy little town with a few mainstay stores, and we were able to move downtown in 1972 to this location,” says Buggee.

As much as Mishkin and Buggee like to buy from American manufacturers when possible, such as Allen Edmonds shoes and Bill’s Khaki sportswear for men, they also offer quality European design such as René Lezard for women and Zegna and Canali for men. Indeed, Family Britches doesn’t necessarily try to reinvent the wheel when it comes to accepting what’s a given on the worldwide fashion scene.

“The Italian manufacturers are probably the most popular,” says Mishkin.

As everyone in town would likely agree, education is important. Family Britches feels similarly, and is often a first stop for young men in need of a suit or blazer. “It’s an opportunity to give them an education and introduce them to fashion,” says Mishkin. So, having an event like Cannoli with Canali makes perfect sense. “We do events with our vendors twice a season. It’s an education for our customers to learn from the manufacturers,” says Mishkin. “Why they do what they do. How fashion is changing, and what direction it is going.”

Girls, usually more fashion-aware and self-educated, become customers later when they become young women. “We leave young girls to some of the other shops in town,” says Mishkin. The wait, on both sides, is worth it, in Buggee’s estimation. “We’re one of the few stores that do women’s alterations free of charge,” says Buggee.

In fact, attention to alterations and ongoing service are hallmarks of what makes Family Britches stand out in the business. “Barry and Rick have done multiple re-alterings for my sons as they have grown, and at no cost,” says longtime customer Laurie Brecher. “They always go above and beyond what is expected. I am certain there would be an endless tribute were we all asked to recount memories of Family Britches stepping in to the rescue- a personal delivery to a home on the eve of a Bar Mitzvah, a search for a hard-to-find out-of-style item for a special performance, and, if their endless supply of choice isn’t on the floor, they will find it. They provide ways to recycle and refurbish a wardrobe–something lost in an era of large stores and online purchases,” continues the Chappaqua Mom.

Unsurpassed service with heart and soul is Brecher’s way of summing things up. It’s an apt tagline that might actually make the modest and committed mainstays blush. At the same time, these professionals are not immune to the appreciation, and take special pride in how Chappaqua has conveyed a sense of having one less thing to worry about when putting together family events. Maybe sending us a picture or a note of gratitude on how good everyone looked, says Mishkin, “they often express that we made it easier because they knew they were in good hands.”

Those stories span several generations now, and while Barry and Rick certainly enjoy the memories, both know the passion that still drives them is the front door swinging open each day. “We really live in the moment,” says Mishkin. Still, there’s no way to deny all the years that have passed; the original children who now bring in their children and possibly grandchildren must make them regrettably wonder where the time went. Or maybe not? “It doesn’t make us feel old. It makes us feel young because we’re still here, doing what we love doing,” concludes Buggee.

Rich Monetti lives in Somers and has been a freelance writer since 2003. He works part time at Mount Kisco Childcare Center and writes on Sports, Politics and Entertainment.