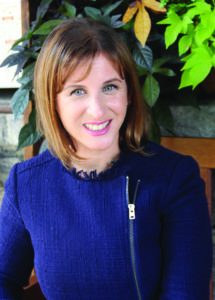 When I think back to my 9th grade journalism class, I still remember my teacher saying that “everybody has a story to tell–you just have to ask the right questions, sit back and listen.” Her advice still rings true today. Because we live in affluent communities in a prosperous time, people often think that all is copasetic here in bucolic Northern Westchester but everyone has their struggles. Sure, some are bigger than other’s but it’s all relative.

This issue features many stories focusing on grit and resilience. As a first generation American, Anna Young’s article on refugees coming to our shore despite dangerous circumstances with very limited support resonates deeply with me. Thankfully there are local residents doing amazing acts of kindness to help them resettle.

Anyone who has ever suffered from a serious illness knows how it can impact the entire family. Gilda’s Club of Westchester is offering support workshops for bereaving parents and children. Plus, as Beth Besen’s article points out they are starting new support groups for anyone undergoing treatment for cancer at the Bedford Playhouse.

Sometimes a story sticks with you and I’m sure you’ll remember Shauna Levy’s profile on alopecia awareness advocate Ali Lambert Voron. I had seen her at my gym swimming and smiling with her kids mistakenly thinking that she had cancer. Voron became completely bald at age 16 due to alopecia, an autoimmune illness. Her strength and resilience coupled with a sense of humor is something we can all aspire to.

I’d be remiss if I didn’t mention our cover story on The Armonk Players. Now you are probably wondering how this one relates to grit and resilience but anyone who ever has been in theater knows that it is takes blood, sweat and (sometimes) tears to put on a production. The fact that this community theater group has been churning out fabulous productions for more than two decades is proof that this group knows how to overcome obstacles.

Finally, as a mom of three kids, Marlene Kern Fischer’s column perfectly describes the grit and resilience that any parent needs to survive to what I refer to as the “best but hardest job you’ll ever do with the lowest pay.” To all the moms out there in the trenches, Happy Mother’s Day and for all our readers happy spring!

Hours after arriving in Paris, the charismatic Dorante is smitten by a pair of comely young ladies and confounded by a case of mistaken identity. Not to worry, this scoundrel is handsome, charming—and a pathological liar. He wins admirers wherever he goes…so long as he never has to tell the truth! Misunderstandings, secret agendas, and witty wordplay abound in this delightfully ingenious and irreverent update of a classic French romp.

“THE LIAR and its mischievous adapter, David Ives, want you to savor every meticulously groomed conceit, every stylishly turned-out couplet, every assiduously manicured joke…Ives is an inveterate jester.” —Washington Post.

“Walk-ins” are always welcome (we have ample seating), but we recommend that you purchase your tickets in advance online—you choose the exact seats you want, there is less waiting in line and you may pay with a debit card or credit card. “Walk-ins” may only pay with cash or by check (made out to either Friends of the North Castle Public Library, Inc. or FNCPL, Inc.)—we don’t accept credit cards at the theatre.

We perform at Whippoorwill Theatre (adjacent to the North Castle Public Library) at 19 Whippoorwill Road East, Armonk, NY 10504 (use the Kent Place entrance, please). You can get travel directions here.