Walk down King Street in Chappaqua, NY and you’ll spot tons of local businesses. Be it a clothing store, nail salon or a jewelry store–they’re all over. Many of these businesses have been around for decades and have well served the residents of the area. However, these businesses are not just good for selling products to locals, but many also grant significant support to various charities. Desires by Mikolay, one of the jewelers in town, is well known for its support of the Society for the Prevention of Cruelty of Animals, or better known to many as the SPCA located in Briarcliff Manor.

Scott and Tara Mikolay, the powerhouse husband and wife team that owns Desires, became involved with the SPCA in 2008 because of their joint passion for animals. The couple has had six of their own rescue dogs over the years, ranging from an Australian Cattle Dog to an American Bulldog, so the idea of supporting a charity to raise awareness and support for rescue animals was a “natural fit,” according to Tara.

Tara and Scott care so deeply for the SPCA that they wanted to expand their contributions beyond the personal level by getting their business involved. Since 2008, they have hosted Shop for a Cause, a charity shopping event where they donate 10% of the night’s proceeds to the SPCA. This year, Desires had record success, raising over $4,000 over the course of the evening. The night was so successful because of the staff’s dedication to the cause, as well as the love and support brought in by each client.

In total, Desires has raised more than $45,000 for the organization through the annual holiday event as well as by offering “Gifts with Impact” throughout each year. Tara explained that it is incredibly useful to have “a platform in one of the most generous towns in the country.”

Although shopping for jewelry is one great way to help the SPCA, there are many other ways to get involved. The SPCA is always in need of committed volunteers and they have an Amazon wish list with products they need for the shelters. Even something as simple as liking the SPCA on Facebook can make a difference and according to Tara, “your impact, however big or small, is so meaningful.”

Tara explained that the SPCA is more than just a rescue organization. Their programs range from taking tireless care of each dog they take in to working to change animal abuse laws and education.

Tara and Scott’s connection to the SPCA runs deep. “Rescuing dogs for us is the only option. There are so many dogs in need and we have been blessed with the love of all of our dogs,” Tara said. The couple is even on the lookout for a companion for their current dog, Gus, and they will certainly be looking to rescue. With more than 1,300 orphaned animals rescued at the SPCA last year alone chances are Gus may just find a “furry friend” there.

There’s probably not a resident in Chappaqua who doesn’t appreciate the Mikolays’ passionate support for the SPCA of Westchester and its charges; their store has hosted many fundraisers in support of rescues. To date, the Mikolays note that with the help of shoppers, they have raised over $40,000 for animals in need. 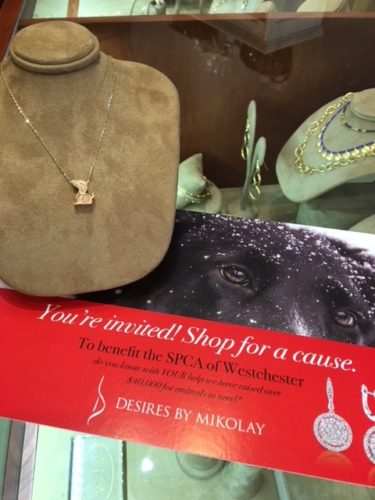 Shoppers can once again enjoy a Holiday Sale with 10 percent of the night’s proceeds earmarked for the SPCA; Desires emphasizes that each item selected is a “Gift with Impact.”  “Shelter animals have a particularly tough time during the Winter months,” the flyer for the event states. “Let’s show them all the love and support we can!

So come on down for some small bites and festive fun too. Bring your own furry friend or meet someone else’s; they are also invited and always delightful to meet. Desires by Mikolay is on 55 King Street, Chappaqua, NY   or visit www.desiresbymikolay.com