I realized there was a problem when my husband said, ‘how was your rally? I heard on the news Bernie supporters interrupted it.’ What? That’s what was reported?! Read on…

Commentary on yesterday’s Hillary rally at SUNY Purchase from someone who was actually there:

Why am I reading myriad articles reporting on the 40 minute speech with headlines, ‘Hillary Clinton rally interrupted by 20 Bernie supporters’ as if this is THE story? It’s not even A story. 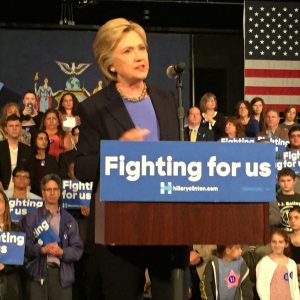 Fewer than a dozen college kids, standing in the back, heckled her with ‘You Win We Lose’ for about 5 seconds, if that, and walked out. Hardly impactful, nor impressive. Seconds of no-substance interruption by a few almost-adults became the focus of media reporting on the packed, line-out-the-door, people-had-to-be-turned-away, Westchester County rally of a former FLOTUS, NY Senator, Secretary of State, front-runner Democratic Presidential candidate.

I’m wondering how they will lose if she wins. As Senators, she and Bernie Sanders voted together 93% of the time. That’s neither here, nor there. It’s simply a fact.

Hillary Clinton spoke to rousing cheers about a concrete plan for affordable college–free community college and debt-free public university; expanding full human and civil rights for workers, women and LGBT communities; clean water for all; expanding the job market and growing the national infrastructure with domestic jobs; raising wages; combating climate change; quality education for every child regardless of zip code, a focus on early childhood education; continuing the success of the Affordable Care Act; reigning in drug costs; restoring voting rights; ensuring gun safety protections. She talked about action and a proven record of accomplishment.

Controversy sells. Anger sells. Dissension sells. Bad behavior sells. It’s about clicking the almighty link. A candidate making promises she backs up with action, experience, plans and a room full of well-behaved supporters doesn’t garner the attention the media wants. But a strong candidate like Hillary Clinton IS exciting. Being in the room with her and the passionate supporters WAS exciting. Voting for her on April 19 will BE exciting.

Yet, the focus is on a sophomoric peanut gallery demonstrating disrespect as Clinton replied with cool aplomb, “We’re very sorry you’re leaving!” As if that’s all that happened. Forget the spirited women with the Hispanic Democrats of Westchester banner, the parents anticipating history being made with their children in tow, the crowded room, the cheers and the loud, wild applause for a solid candidate. The people trying desperately to touch her, shake her hand, speak to her. The energy and zeal people think is reserved for the Senator from Vermont, only something that can be conjured up by the most angry of college students was IN. THAT. ROOM. But who will know?

A recent article said Hillary supporters are the most enthusiastic, contrary to the image portrayed of the populist Trump/Sanders proponents. We are the sleeper enthusiasts who no one acknowledges. We are happy with our candidate. Not aggressively angry. Not poorly behaved, engaging in negative behavior. No one knows we are here, but we are and we are politically active and we are voters! But there’s no story in that.

Take the focus off the disrespect. Take it off the bad behavior in political discourse today. Not all of it is coming from Trump and his cronies. The media can craft its narrative but these are FACTS. Or should I just be thankful they’re not reporting on her hair and clothes?

Bobbi M. Bittker is a Stay at Home Mom and Attorney, on the Board of the Bedford Community Theatre, member of the Chappaqua Friends of Hill Group and a vocal supporter of Israel, Gun Safety and LGBT, Women’s and Civil Rights. 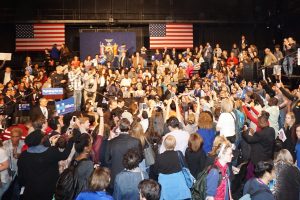 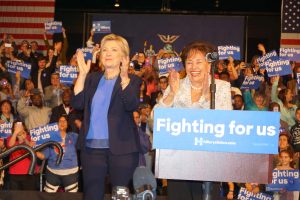