It was impossible not to admire…
 The soft blue hue that promotes a sense of soothing and peace.
 The sparkling silver and gleaming white of the walls and sleek new equipment, “state of the art” to any observer.
 And the true spaciousness, “averaging 655 square feet to accommodate the technology and staff required for today’s advanced minimally-invasive surgeries,” according to the hospital’s release.

And, one by one, with proud hospital staff and the generous donors attending, and a group of public officials and some 100 guests in attendance to congratulate a job well done: ribbons were cut on March 18th to celebrate six new operating rooms-and a 14-bay Recovery Unit soon to open in April at Northern Westchester Hospital. All six new operating rooms were named after donors who supported the fundraising campaign.The ribbon cutting was led by the following contributors: David Miller, MD; Dawn Tinger, spouse of Al Tinger, MD; the Children of Geraldine and Joseph La Motta; Seema Boesky; Peggy Collins, MD; and Nancy Karch.

“We are here to celebrate a major accomplishment, one that truly took a village. Fortunately, we have a really great village and if you’re standing in this room today, it’s because you played some part in making this incredible project possible,” stated CEO Joel Seligman in his remarks.

In a nod to the hospital’s centennial celebration, Seligman humorously noted that once upon a time a patient “would be rightfully terrified” to find themselves in the OR…Let’s also acknowledge that unless being in an OR is your day job, this is typically NOT where you want to be,” he added. But he then added a few words of comfort: “What you do want is to know that the very best is available right here, in your backyard. Northern Westchester Hospital is a surgical hospital. In 2015, 154 surgeons performed over 9,000 cases, of which 570 involved our two Da Vinci robots.”

An additional highlight, noted Selgman: the floor includes a transformation of post-operative patient rooms from double to single rooms “to provide more space and greater privacy for patients and family members.”

Nancy Karch, Chair of the Northern Westchester Hospital Board of Trustees, stated that “the next phase of this project involves renovating our current operating rooms, building additional pre- and post-anesthesia bays and a new comprehensive clinical laboratory.”

She thanked those “who generously supported this project including many physicians who demonstrate their commitment to our patients through superior care and by giving of their own resources. We are most grateful.”

“The new surgical suite takes already great care to an exciting new level of sophistication,” offered Marshal Peris, M.D.,Director of Spine Surgery for NWH’s Orthopedic and Spine Institute, in his remarks. “Asking for money wasn’t so bad because I knew how important this project was and the results would be something we could all be proud of. I’d like to thank my surgical and medical colleagues who helped make this possible and who didn’t avoid my phone calls,” quipped Peris, who is also President of the Medical Staff, a member of the Board of Trustees and Co-Chair of the NWH 2025 Physician Campaign.

Dr. Peris also read a statement from Dr. Tom Lansen, who could not attend. Lansen is former Chief of Neurosurgery at NWH, former member of the hospital’s Board of Trustees and a member of the Centennial Committee. Dr. Peris had asked him for his thoughts on just how far we’ve come.

In one portion, Dr. Lansen commended the leadership of Frank Brosens, Joel Seligman, Michael Finkelstein, Marla Koroly and Lauraine Szekely helpful.”They allowed us to make real strides in the Neurosciences and Spine surgery, greater than those usually seen in a community hospital, such as encouraging me to establish the first Gamma Knife stereotactic radiosurgical unit in the Hudson Valley. I found it remarkable that the Board not only readily embraced this technology, but encouraged me without hesitation.”

Following the ribbon cutting, the tours were led by Surgical Services Leadership of the Operating Rooms and Pre and Post Anesthesia Care Unit. 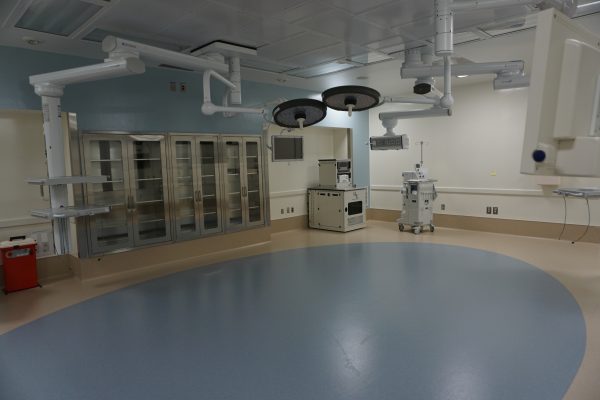