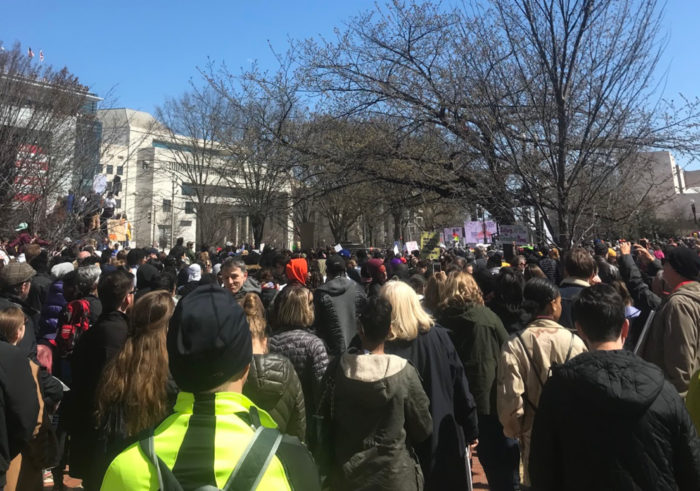 March 14, 2018, Chappaqua, NY — It’s been a month since the tragic shooting at Marjory Stoneman Douglas High School. And as is the paradigm, as the days since the tragedy have passed, so has the coverage of it.  However, after the slaughter of 17 innocent lives in a school building, our country has refused to remain silent. We have refused to allow this horrific event to become just another headline, we have refused to allow the victims to become just other statistics. Today specifically, the students of our nation refused to stay silent. Today we walked out.

I could describe how it felt to have my phone alarm ring at 10 a.m. and watch nearly every student rise out of their seats to walk out of school, communicating with their actions that something must change. I could describe the goosebumps I received as a result of seeing the 17 empty desks displayed outside, a tribute to the 17 innocent lives taken. I could describe the sea of orange outside of our school’s doors, or the gut-wrenching speech given by two students affected by the tragedy. I could describe it all, but it wouldn’t do it justice, because today was bigger than just an isolated protest for gun-safety.

Today we united as a student body (and with student bodies across the country) to take a definitive stand against gun violence and prove that this issue will not just disappear without a fight. We walked out of school with the names of the victims on our tongues, and the prospect of change in our hearts. Too many communities are forever haunted by these harrowing events, too many hallways are stained with blood, too many innocent humans have become victims.

The overwhelming participation this event received at Horace Greeley, as well as at schools across the country, shows how vehemently our country’s youth will fight to change the policies surrounding guns. Even further, today’s walkout showed how passionately my generation will fight to change any policy that ails our country, rather than aids it. Although the point of today’s walkout was to communicate our feelings on gun-safety, a larger idea was communicated: our generation will not be silenced. Today the world witnessed our battle cry.

I take pride in participating in today’s walkout; it will be an experience I will forever value. This experience gave me an opportunity to stand up for what I believe in and stand in solidarity with the victims of the Parkland shooting. But I will also never forget this experience for another reason. By participating in this student-organized, student-led walkout, young people across the country showed that the ability to raise our voices and fight for what we believe is an aspect of our nation that we hold sacred. We expressed our desire to be informed citizens who participate in peaceful protests, a hallmark of our democracy,  in order to affect change. We formed a united front in order to confront an issue plaguing our society, and we continued our vow to take action.

Through our actions today, we demonstrated that we are committed to bettering our country, and truthfully, I have never been more proud to be an American teenager. My generation, the so-called “leaders of tomorrow,” is taking action today. And that makes me feel immensely hopeful.

Moreover, today’s walkout made me feel grateful to live in a community like Chappaqua. Instead of worrying about the consequences of participating in the walkout (expulsion, suspension, etc), I walked out of the school building knowing that I had a community that supported my decision to take action against injustice. Youth participation in our democracy flourished in Chappaqua today, because an environment of safety was fostered, and the expression of opinions was welcomed. Instead of condemning the walkout, instead of merely tolerating the walkout, my community supported this event, which is truly empowering.

I am so incredibly lucky to live in a town where my ability to speak out is encouraged; in fact, if every community encouraged youth participation in democracy like Chappaqua did today, the world would change for the better. We are the fuel for that change.

For 17 minutes today, our generation provided a glimpse into a time in the future when we will be tasked with the responsibility of leading. And we take that responsibility seriously. If today is any indication, when we inherit this country, it will be in many capable hands.

As long as young people keep deciding that our voices will be heard, as long as my generation yearns to affect change, as long as this moment transforms into a movement, I am certain that we have better days ahead of us. So let’s find our passions and fight for them; let’s raise our voices and refuse to be ignored; let’s educate ourselves and learn from others; let’s care about the future that will one day become our reality.

There’s no reason to become the leaders of tomorrow when we can claim those positions today.

Byram Hills Central School District Superintendent Jen Lamia shared a few details about today’s walkout of over 200 Byram Hills High School students. She described the walkout as being “in response to the Parkland tragedy.”

“Deputy Superintendent Dr. Tim Kaltenecker informed me the kids released 17 balloons when they said the names of the victims,” said Lamia.

She relayed that the students at the high school organized the event with the building principal Chris Walsh. “The students gathered outside the front doors of the school and were reflective, quiet, and respectful,” she said.

“Some students spoke the names of the students from Parkland. A few others spoke about supporting safety in schools. Overall, our students care about making a difference in the world and are very thoughtful about how they hope to do it!”

Lamia was on a board visitation to the H.C. Crittenden Middle School at the time of the Walkout; Deputy Superintendent Dr. Kaltenecker was at the high school.

At the middle school, students had organized a sit-in and spent their time writing acts of kindness on index cards.  “The event at the middle school was also run by students—completely–and they were fantastic,” Lamia added. “Our kids are a gift.”

While not a student-organized event, per se (“Developmentally, the kids are too young,” said Lamia), at Wampus Elementary School, the teachers engaged the children in acts of kindness activities.