A Chappaqua-based graphic designer Alex de Janosi has put pen to paper to make his feelings known about what he thinks about our current president.

“I am definitely not a political person,” says de Janosi, who graduated Greeley in 1986 and currently has one 13-year old son at Seven Bridges and a 17-year old son at Greeley, “but after a year of rubber-necking our political process on TV, it took me until a day before the inauguration to pick up a pencil and sketch a logo in protest.”

As a graphic designer who has created logos for such companies as The Bank of New York, ExxonMobil, Doosan, Chevron, Chartis, Neuberger Berman and many others, he never thought he would leverage his talents in form of a protest.  “I just couldn’t believe what I was seeing. The fact that Trump was actually going to be in the oval office the very next day just blew me away, so I doodled what would become this logo. Many colleagues were planning on marching and seeing their interest in my logo gave me the push to get it out there.” 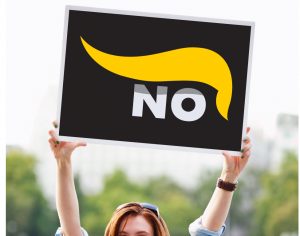 While it is critical for political candidates (and of course any brand) to have a well-executed logo to represent themselves, Alex noticed a need to have a strong and memorable logo in form of a protest as well–one that can simply and effectively capture the message. “Just like Obama had his ‘O’ logo, and Hillary had the ‘Arrow-H’, Trump needs to have a logo for us who do not agree with his policies and views to rally around.”

To this end, de Janosi has designed a logo that has been successfully catching on. “The hair speaks for itself, the short two-letter word fits nicely in proportion to where the face would be, and of course the ‘o’ can be seen as an eye. The shadow from the hair on the white letters creates a bit of dimension to the design,” says de Janosi . “One can’t say everything in a logo design, especially about one’s feelings about this president – but ‘NO’ pretty much sums it up.”

Stickers of this logo are available on Etsy and portions of the proceeds will be donated to Planned Parenthood. “The response has been amazing! Not only have I received an incredible amount of orders from Westchester, folks from California, Hawaii, Alaska, Texas and in between have been supporting the effort.” His goal is that the logo will be one “like minded folks can be proud of and display.” So if your driving along Route 117 and see a bumper with this sticker on it, know that it was not only made in America, but created in your home town! 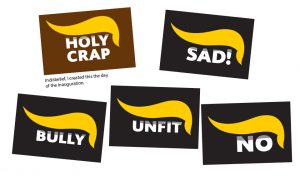