Rec Field on Wednesday summer nights is the place to be when New Castle’s Department of Parks & Recreation holds their annual Summer Concert Series. The free series usually starts the first Wednesday after July 4th and concludes around the first or second week of August. Expect to see families dancing or relaxing on the lawn plus children participating in kids’ activities. The concerts cover a wide swath of musical genres including classical, Americana, jazz, R & B, Motown, 90s music and an ever-popular Bruce Springsteen band.

An annual summer tradition for the past 30 years, the concerts begin at 7 p.m. with the bands taking center stage on the Gazebo. Recently food trucks have been a welcome addition to the mix.  Commuters love coming off the train catching live music and families love interacting with their neighbors and just taking in the beautiful summer nights with a lovely musical backdrop. Concertgoers recommend bringing lawn chairs and blankets and anything you wish to dine on al fresco. In case of inclement weather, concerts will be held at the Chappaqua Performing Arts Center. To check on the location of a concert, please call the Recreation and Parks Department events hotline at 914 238-2540. 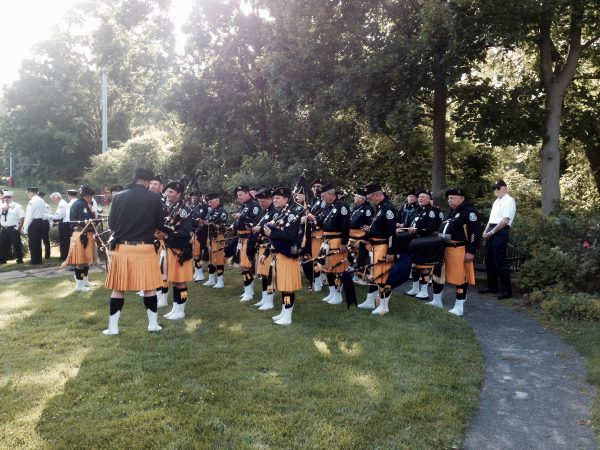 When the temperatures rise, it’s time to partake of a treasure in the hamlet:  concerts in the gazebo.  Grab a blanket, chairs and some sustenance and relax while listening to a roster of outstanding bands.

This year, instead of the usual array of cover bands, the town has assembled a line-up of several different kinds of groups.  Some will glorify the classics and others will showcase  original music.  Chris Soi, Assistant Superintendent of the Recreation and Parks Department of the Town of New Castle welcomes this new direction.  In addition, he is proud to say that “local talent” will be on stage.

First up this year on July 11 will be the Don DuPont Chappaqua Dance Band.  DuPont, Sr. is well known to residents as the leader of the Recreation and Parks Department jazz band.  Don Dupont, Jr. is the music teacher at Roaring Brook Elementary School.   They will regale the crowd with big band tunes.  “I think dancing will definitely be appropriate during their performance,” Soi noted.

On July 18th The Chappaqua Orchestra will grace the stage.  Their program will include suites from the five great musicals:  “Oklahoma,” “Carousel,” “South Pacific,” “The King and I,” and “The Sound of Music.”  Music Director and Conductor Michael Shapiro cited the “instant appeal” of this genre for all ages.  He described the “magic” of the music:   “It’s very basic but it gets under your skin.”

Norberto Goldberg and Amazonas will be appearing for the first time at the gazebo on July 25th.  This five piece band will deliver a rousing Latin jazz beat.  Goldberg has recorded several albums and has played on Broadway.

On 8/1 Chris Fox and Mojo Monde will take the stage.  Their program will focus on rock, folk, and the blues.

All concerts begin at 7 pm and the dates are rain or shine.  Check www.mynewcastle.org for further information and rain locations.