On the one-year anniversary of the first COVID-19 patient admission, approximately 50 to 100 people, including the Mount Kisco Fire Department, patient families and visitors, gathered on walkways lined with luminaries around Northern Westchester Hospital (NWH) to remember those who were lost to the pandemic and honor the hospital’s dedicated health care professionals at the change of shift.

“This was a significant week at Northern Westchester Hospital as we recognized the day that we admitted our first COVID-19 positive patient on March 11, 2020, and reflected on what the past year has meant for our entire organization,” says NWH executive director Derek Anderson. “We are incredibly proud of the resiliency and dedication of our team members and so grateful to the community, which rallied around us with their continued support.  Over the past few days, we have had several opportunities to recognize our team members for the outstanding care they have provided over the past year and for the sacrifices, they made in their personal lives so that they could be here for our patients and community.  We also paid tribute to the lives lost during the pandemic.”

One particularly moving moment was the change of shift recognition held on Thursday.  Hospital leadership came together to greet team members as they arrived or departed from their shifts.  Each team member was invited to create a luminary bag on which they shared a memory or word of inspiration.

Each bag contained a prayer card that included the verse read by hospital chaplain Reverend Angela Maddalone during a moment of silence earlier this week. The luminary bags also included a tea light, which staff lit before placing their bag in a growing lineup of tributes throughout the entryways.  On Thursday evening, the luminaries were brought outside to ‘spread the light’ across the campus at the end of the day.  Visitors were invited to join team members as the Mount Kisco Fire Department rang a bell at 7 pm to honor those who were lost during the pandemic. Large spotlights illuminated the campus, spreading light through the community.

June 12, 2019, Armonk, NY — Colorful accolades and honorary plaques were presented to four exemplary community firefighters by fellow firefighters and by Elks leader James Comstock of the Mid-Westchester Elks Lodge #535. Last year the Elks honored police officers; this year the focus was on recognizing the contributions of outstanding firefighters.

Dozens of Elks members together with family and friends gathered to honor the recipients and enjoy the lovely ceremony and a delicious home cooked dinner–all of which took place during the 2019 First Responders Appreciation Awards Dinner at the Armonk American Legion Post 1097.

The honorees were called up in the order of most years of service. Ex Chief Mitch Sime, for 62 years of service with the Armonk Fire Department, received the honor for his immense dedication to the department and for his guidance and leadership to numerous firefighters spanning decades of his professional and big-hearted service.

Next, Armonk Fire Department’s firefighter Buddy Schultz, was honored for 52 years of service and called “another staple in our community, a huge asset to the firehouse, a top daytime ambulance driver who ensures people receive life-saving care in a timely manner. Not only is he a firefighter but also serves as a commissioner too to make sure the firehouse runs smoothly.” Firefighter Schultz was also described as one of the department’s top drivers and trainers. “He makes sure everyone stays safe in the process.”

A decorated Marine and 3rd generation firefighter, 1st Lt. William Sullivan, Jr., of the Portchester Fire Department, was honored for his 50 years of service, and also for his many public service and educational accomplishments–including being a nationally certified fire instructor and investigator. After fighting the North Vietnamese army in the Marine unit, Delta Company one Battalion Five, for 10 months and nine days, Sullivan was wounded three times in combat. Following honorable discharges, he became the recipient of two Purple Hearts. His public service includes being the last founding member of the Westchester Fire Emerald Society Pipe & Drum, which escorted the recipients into the lodge (and who later performed Amazing Grace).

A fourth honoree, Richard Constantino, a firefighter for the City of White Plains, “currently oversees medical equipment inventory and deployment  as well as communicating EMS protocols,” related a fellow firefighter who said the award was forthcoming after Constantino “was instrumental in two life-saving actions” including ones involving stabilizing a young adult following a drug overdose and another, saving the life of a 4-year-old child with CPR following a food choking incident. “He is a positive role model and mentor for his children as well as for the firefighters he works with.”

Prior to the awards, Elks leader Anthony Gilberti explained the role the Elks play in U.S. history. These honors took place just two days before June 14, the formal, national observation of Flag Day. The Elks is the nation’s only fraternal body to formally observe Flag Day, he said. After explaining the evolution of the U.S. Flag, Gilberti read that “upon its scrolls is written the story of Americans, the epic, the mightiest, and noblest of all history.” 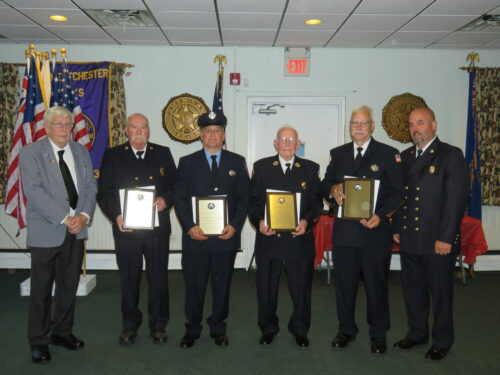