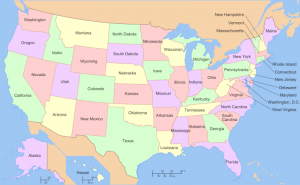 “Her campaign is in the tightest of races and there is a real danger of an unstable demagogue assuming the Presidency.”

“Now is not the time to be attacking the Democratic Party.” — Most Democrats

Discourse within the Democratic party doesn’t have to be a love fest. We don’t have to hold hands and avoid difficult discussion. We’re adults. I think the voting age in America is 18? The truth is important, and this election year has shown that many Americans like hearing the truth. For some reason, others like Donald Trump because he instead tells the “truth,” which often simply consists of fear-inducing falsehoods.

To all those who insisted Bernie Sanders was a blind optimist with ideas too big for America (including getting money out of politics, free public college, universal healthcare, and a $15 minimum wage) that would never come to fruition: You’ve been proven wrong. His ideas may not yet have become a reality, but he knows the road toward acceptance is long and requires patience. He is a man capable of compromise. He proved it first by running for President on the Democratic ticket, which he knew, as an Independent, was not a party he fully supported, but was the best way to get his ideas the greatest exposure and widest acceptance. He again compromised by taking a stance to support Hillary Clinton, in order to take down a much greater threat. Bernie compromised by ultimately accepting a Democratic nominee who many would argue is the epitome of what his campaign fought against.

Bernie’s campaign and eventual loss was not for naught. He pushed Hillary to the left on college tuition, and she now supports free public college tuition for all families earning $125,000 or less. I believe she agrees with many more of the policies Bernie fought for, but refuses to explicitly present her positions because she deems it not the politically smart thing to do.

She remains purposely vague on many issues, pandering to both ends of the spectrum. If polling trends are to be believed, that is not the way to win. Look at Hillary’s choice for VP. While he gave a great acceptance speech, it was a very political decision. This is a man who, like Hillary, is a winner. He is a winner because he is political. He also happens to be white, male, and moderate. In 2005, in a radio ad for governor, he stated, “I’m conservative on issues of personal responsibility. As a former Christian missionary, faith is central to my life. I oppose gay marriage, I support restrictions on abortion — no public funding and parental consent — and I’ve worked to pass a state law banning partial-birth abortion.” This is someone who may present himself well, but by no means has a consistent progressive record.

As we dive into the cyberage, American “backroom politics” has been exposed due to leaks, and people are not happy with what they see. In perhaps any other election year, Hillary may have been the perfect candidate. More than ever, however, Americans want honesty. It’s time Hillary learns this. She needs to stop taking money from big moneyed interests and start taking clear stances on the issues.

Hillary is one of the most qualified presidential nominees in history and her intelligence is unquestionable. I truly believe her morals are in the right place and for the most part she has only the best in mind for Americans, but those morals are skewed by money and a corrupt system, both with which she has became far too comfortable.  But even at the height of my support for Bernie Sanders, I never believed Hillary was malicious; she has always projected a progressive trend. However, she needs to start playing the role of a leader, and stop taking stances only when the timing feels right.  The right time is now.

Honesty and consistency are vital this election. Now is the time for her to look deep within her heart and fully embrace stances on issues that she cares about. Her motives may still be suspect to some, but I’m convinced that each of her goals for America is what is in fact best for America. For those who desire truth and not “truth,” she must stand by the courage of her convictions. She cannot afford to dance around issues like a savvy politician. She must be bold. Her campaign is in the tightest of races and there is a real danger of an unstable demagogue assuming the Presidency. Bernie enchanted me and my peers by bringing something refreshing to politics – honesty and consistency. If Hillary is honest and forthright, and isn’t merely political in her behavior, she can save us from entering what could be the most devastating era in modern American history.

Ari Bennett is a rising Junior at Union College majoring in Math and Studio Art. He also has a passion for politics.