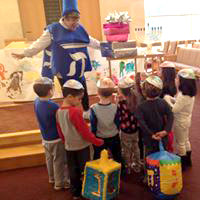 When it comes to making a decision about where your child will attend preschool, there are many factors that are part of this first school experience. Visit the places you are considering. Talk to other families who have attended the program. Here are a few things you and your family may wish to consider:

1. Your first impression of the school

2. Referrals and recommendations and the reputation of the program

8. Signs of community, parent and family engagement as well as children’s programs

9. Are adults talking to students in warm, welcoming and nurturing ways?

“A recent project-based learning initiative called ‘Say Something’ at Seven Bridges Middle School centered around the notion that while everyone has a voice, it is critical to teach kids how and when to use theirs. Say Something was born from the lessons  learned while reading the novel The Giver. The story teaches that our voices help to shape the communities we live in and if we do not speak up, as was the case in the novel, our world will become a colorless if not meaningless one to live in.

“Through classroom investigations and parent/child conversations, students uncovered that they do have opinions and ideas that are worth sharing on a wide variety of issues. To that end, each of them learned features of argument writing (the focus of the unit) to develop a formal letter to an individual or agency regarding a concern or a change that might be worthwhile. 71 letters were sent!  While the students’ ideas are wide reaching and varied, their intent was the same. I celebrate their efforts and assure them that even if they do not hear back, they made a difference because they took the time and effort to Say Something!”  — Pauline Daglio, 6th Grade Teacher, Seven Bridges

“If nothing else, each student hopes to receive a response that acknowledges his or her request and that provides some form of feedback about his or her cause,” said Daglio.  (The Inside Press plans to answer these letters too!)

How Can we Help Families Struggling with  School Supplies?

School supply shopping should be fun and carefree, but not all kids have this experience. Some families don’t have enough money to buy pencils, pens, and textbooks and kids need these necessary supplies. Many people aren’t aware of this problem and we need to start making a change. On the other hand, we can ignore this issue but, what if we take a moment to think about the children’s futures? Do you really want them to live difficult lives? We need to call attention to this issue because, without basic school supplies, kids aren’t able to learn. Families in poverty can barely provide food so most times they aren’t thinking about school supplies. Old school supplies can also cause embarrassment to the child.

About 15 million children in the U.S.A live in poverty. Families who live near or below the poverty line usually struggle to get basic items such as soap, food, or clothes and most times they don’t focus on getting their children new school supplies. If we add more organizations that will donate free supplies to families in need, then children won’t have to worry about saving the one pencil they have. Furthermore, parents won’t have to worry about not being able to provide fundamental objects to their child’s learning. It may be a bit embarrassing going back to school with old, used backpacks and pencil cases. This can also lead to teasing and bullying and no child should have to go through that.

Moreover, kids have trouble learning without proper supplies. The average price for middle school supplies is $520-$1,000. Most families in poverty can’t afford this. For instance, most districts require textbooks which are around $60 each. Without this it is difficult to complete homework assignments and study for tests. Calculators are also another expensive thing on the list. The TI-84 plus CE (usually the one preferred for school) is between $115.59-$150 on Amazon. Above all, kids may suffer and get worse grades because they don’t have good supplies. This can hurt their future of getting into a good college. More donations for necessities in school will make students in poverty feel much better. We need to help their futures and make a change.

Actions need to be taken for kids to have school supplies and people need to become more aware of these issues.

What Can we Do about Girls Being Treated Differently than Boys?

Girls have not been treated the same as boys in sports. This treatment against women who cannot play in the MLB and NFL has to stop. In other words, clearly women have not been able to live up to their full potential, and that is because they have been told they can’t.

Aside from the fact that women are technically allowed to be in the NFL, people keep telling them they cannot. According to the article “An Equal Opportunity League,” Greg Easterbrook said that he checked with the league spokesman Greg Aiello who said, “The NFL has no male-only rule.” That is to say that women are eligible as long as they are three years out of high school and have a usable skill set. So even though women can play, they are not encouraged to do so.

Despite the fact that there has never been a woman in the NFL, Becca Longo could be the first. She is already the first to get a football scholarship to a university. Besides Becca Longo, not every woman has the courage to stand up and take charge, so we need to encourage them. While it may seem like a different approach to professional sports, empowering women to try would make a positive difference.

Caitlin Gailagher, author of “Can a Woman Play in the MLB? Fox’s ‘Pitch,’ “ examines the history that women were once banned from being signed in 1952. Then in 1992 that rule was overturned. In addition, Frances Melissa Mayeux became the “first known female on the MLB registration list” which shows that it is possible to break the chain that has kept females from some professional sports.

In contrast to boys, girls have been told that they are not as good or as talented as boys in some sports. This has to stop! With attention given to this matter, we clearly need to do something about it. Thank you for considering sharing my ideas so that I can help to promote this thinking.