In honor of those whose lives were lost or forever changed by the tragic events of September 11, 2001, Westchester County Executive George Latimer and Volunteer New York! will join as hosts of the 11th annual “9/11: Serve + Remember” event taking place throughout our area from Thursday, Sept. 9–Sunday, Sept. 12. 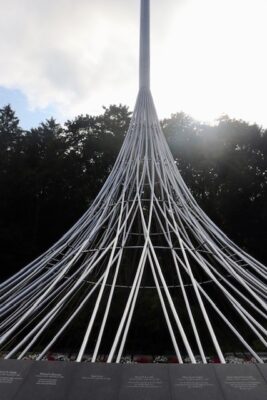 “This year’s 20th anniversary serves a grim reminder of the nation’s darkest day, but it also reminds us of how thousands came together afterward, helping each other, comforting each other and rising through tragedy. We encourage everyone to participate to honor the lives lost and pay tribute to the first responders who saved lives and continue to battle illnesses acquired from that day,” said County Executive George Latimer.

Online registration is now open for individuals, groups, and families. To sign up or learn more visit volunteernewyork.org/service. Advanced registration is required for all 9/11 Day service opportunities.

“For over 10 years we’ve given thousands of community members a way to take part in the National 9/11 Day Movement. Each year built on the solemn legacy of the last,” said Jeanette Gisbert, Volunteer New York! Executive Director. “We encourage all past and potential volunteers to join us this September in the spirit of remembrance and resilience. If ever a time to show unity, the time is now.”

This year’s 20th Anniversary Day of Service events will include two special large-scale park cleanup projects on Saturday, September 11 at Tibbets Brook Park in Yonkers and Croton Point Park in Croton-on-Hudson thanks to a partnership with Westchester Parks Foundation.

Erin Cordiner, Director of Philanthropy & Community Engagement, Westchester Parks Foundation, said “Parks have the power to transform lives, shape lives, and preserve memories. We are proud to stand with Westchester County and Volunteer New York to mark the 20th Anniversary of 9/11 and encourage residents to sign up to help us honor the anniversary and improve the quality of life in our community.”

All projects on Sunday, September 12 will take place at either a New Rochelle Volunteer Hub at IONA College or a Valhalla Volunteer Hub at Westchester Community College. Please review online opportunity description to find out if a project is family-friendly or has requirements, like wearing a mask.

*Denotes a project or volunteer shift where wearing a mask is mandatory or subject to latest CDC guidelines.

ABOUT NATIONAL 9/11 DAY OF SERVICE

9/11 Day was created in 2002 as a way to meaningfully honor the memories of those lost on September 11, 200 and to inspire Americans and others to do good deeds in support of creating a better and more peaceful world. It’s also a day that is meant to help rekindle the extraordinary spirit of togetherness, volunteerism, and compassion that arose in the immediate aftermath of the 9/11 tragedy.

Since becoming a National Day of Service, 9/11 Day has grown incredibly into the United States’ largest day of charitable service. By volunteering on 9/11 Day each year, you help support their mission to transform the anniversary of September 11 into a worldwide day of good and a symbol of American resilience –helping to keep the spirit of all who were lost alive in our hearts and minds creating a positive legacy that can be passed down for generations upon generations to come.

Learn more about the #911DAY movement at 911day.org

The 2021 9/11: Serve + Remember community-wide day of service is presented by Volunteer New York! and Westchester County, and in partnership with Westchester Parks Foundation. With thanks to the generous support from major sponsor, Robison Oil. As well as additional support from event sponsors Empire City Casino by MGM Resorts and NewYork-Presbyterian Hudson Valley Hospital. With special thanks to media sponsor 95.5 K-Love Radio and project sponsors Levitt Fuirst and Sterling National Bank. As well as to our Sunday volunteer hub host sites IONA College in New Rochelle and Westchester Community College in Valhalla.

The core mission of Volunteer New York! (volunteernewyork.org) is to inspire, mobilize, and equip individuals and groups to take positive action to address pressing challenges, support non-profits and improve the quality of life in Westchester, Rockland and Putnam. For over 70 years the organization has encouraged adults to serve, youth to build character, families to bond, young professionals to lead, mature adults to share their wisdom and businesses to engage through volunteerism.

Last year Volunteer New York! helped to inspire over 35,000 volunteers to take action and to coordinate over 360,000 hours of service that supported more than 500 nonprofits and local organizations, providing a value of $11.7 million back to our community. 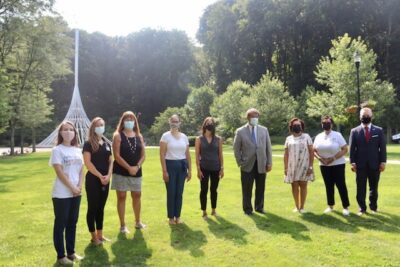 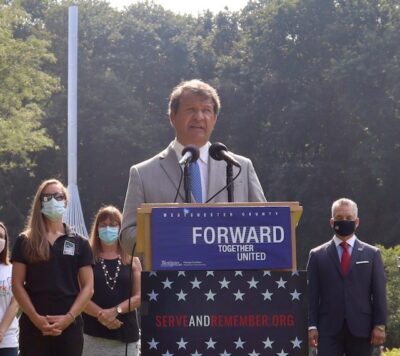 News Release from the office of the Westchester County Executive:

“In a solemn ceremony like never before at Kensico Dam Plaza in Valhalla, Westchester County will pay tribute to those lost during tragic events of September 11, 2001 and heroes who gave their life helping us all move forward in its aftermath. Standing before “The Rising,” the County’s beautiful 9/11 Memorial, County Executive George Latimer will honor the Westchester residents who passed on that devastating day nineteen years ago, as well as those who have died from 9/11 related illness since the attacks.

Latimer said: “While we face societal challenges like never before in our current day, we must never forget the events that unfolded in front of the world’s eyes that morning nineteen years ago. That day changed all of us, and we will always continue to grieve. From the souls lost, to the heroes who selflessly rushed in that we are still losing to this day, we must – and we will – always honor them here in Westchester County.”

Tony Aiello, CBS 2 New York reporter, will emcee the event, adding: “I moved to Westchester in 1999 and remember well the tragic impact the terror attack had on the County. I was honored to emcee the County’s very first 9/11 commemoration in 2002, and it will be a privilege to once again gather with friends and neighbors to remember those we lost.”

Following pandemic protocols, Rev. Troy DeCohen, Senior Pastor Mount Vernon Heights Congregational Church, will lead the ceremony with a pre-recorded prayer: “We as Americans and citizens of good conscience of this great land humble ourselves in prayer reflecting on the thousands of lives lost and the thousands of families that still grieve their loss.”

The ceremony will include the presentation of colors, led by the Westchester County Police Department’s Ceremonial Unit Color Guard, followed by Pipes and Drums of the Police Emerald Society of Westchester County. United States Congresswoman Nita Lowey will lead the Pledge of Allegiance followed by a rendition of the “Star-Spangled Banner” by Lindsay Towers from Maria Fareri Children’s Hospital, and Concordia College’s Brass Ensemble will play – adding music to the solemn backdrop of the memorial.

Chairman of the Westchester County Board of Legislators Benjamin Boykin, who will speak at the ceremony, said: “Unfortunately, this year, we can’t physically provide a shoulder to lean on to the families and friends of those we lost 19 years ago. We can’t wrap our arms around the loved ones of the first responders or those who worked the pile in the days and months afterward. But we will never forget their sacrifice. Let’s honor them by committing ourselves anew to the spirit of unity and shared purpose their loss inspired in us all.”

A commemorative wreath will then be laid on the “Beam of Remembrance” by Deputy County Executive Ken Jenkins, a steel beam that was pulled from the ashes of the World Trade Center, and dedicated to the County as a lasting reminder of our nation’s sacrifice and strength on that fateful day.

Adding to the interfaith prayer at the ceremony, Imam Qari Amjad Karim of the Westchester Muslim Center said: “As our country remembers the heartbreaking events of September 11, 2001 – we turn to prayer at a time when our nation is facing unprecedented challenges – now more than ever we need mercy and strength to guide us on the right path.”

The names of the men and women who lost their battles to 9/11 related illnesses since the attacks are to be read aloud by surviving family members. Their names will be added to the 9/11 Related Illness Memorial, announced by Latimer last year, that will accompany “The Rising” once it is complete. Matthew McCauley and Peter Woods, Co-Chairs of the 9/11 Related Illnesses Memorial Committee, will also give remarks on the committee’s efforts. Those names are as follows:

Following the reading of the names there will be a performance of taps by Police Officer Peter Blume from the Mount Pleasant Police Department.

The ceremony will conclude with a live prayer from Rabbi Howard J. Goldsmith of Congregation Emanu-El of Westchester: “As time passes, the memory of our loved ones who perished that day stand as a reminder. They remind us to live up to our potential, to live in a way that is compassionate and kind, and that the bond of love is stronger than death.”

Westchester County, located in the heart of the historic Hudson Valley, covers 500 square miles and has a population of just under a million.  Originally home to Native Americans, who were members of the Lenape tribe, it is today a rich mix of many cultures and landscapes.  The County is a blend of bustling cities, quaint villages and picturesque towns as well as open spaces and a network of beautiful parks. Westchester is made up of 6 cities, 19 towns and 20 villages.  Westchester County is known for top-notch public schools, and a high quality of life.  The County is also an intellectual capital, boasting a highly educated workforce, competitive colleges and universities, Fortune 500 companies, world changing non-profits, and cutting-edge research centers.  Westchester is led by County Executive George Latimer, who took office in January 2018 as the ninth County Executive. Using inclusion and openness as a foreground, Latimer is fighting to make Westchester a destination for all people to live, work and enjoy. Learn more about Westchester County by visiting www.westchestergov.com