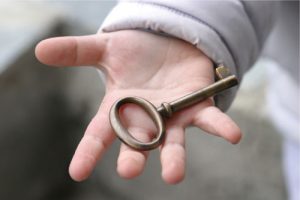 When I was in first grade, my Mom went back to work and informed me that I would be coming home to an empty house two days a week. She assured me that she’d be 20 minutes away by car and would come home immediately if I ever needed her. She gave me a house-key tied to a shoe-string and put it around my neck. She told me that if I didn’t lose it she’d upgrade the string to a silver chain before long. The only time she ever actually had to come home was when I fell off my bike, and, by then, the string had progressed to a gold-filled chain. Years later, a father to small children myself, I asked her if she was out of her mind having a six-year-old come home to an empty house. She replied with absolute certainty, “I knew you could handle it.” She was right, and I believe that experience nudged me in the direction of being an independent person.

In 6th Grade, our teacher assigned a 50-page term report about a specific country. This was way beyond anything I felt I could ever accomplish.  I knew I’d have to write a lot of words about Japan but, beyond that, I had no clue. We had almost the whole year to work on it and, literally the night before it was due, I approached my Mom, handed her my wildly chaotic and disorganized notes and asked her to turn them into at least 50 typed pages, single-spaced please. At the time, I couldn’t really understand the pained expression on her face, but I clung to the fact that months earlier she’d said she’d type it. It never occurred to me that she might have needed more notice. My grade wasn’t great, but  I’ll never forget that she stayed up most of the night typing for her  screw-up son.

Just as high school began, along with all new freshmen, I was evaluated by the school speech therapist who quickly determined that I needed to come see him three times a week to work on my serious speech impediment. Throughout my entire education this had never come up. Terrible penmanship? Sure. Sloppy work-habits? Absolutely. However, I had always thought that my ability to enunciate was one of my few natural gifts. That this professional, who, I might add, happened to lisp himself, so fervently believed that I needed to work with him was horribly upsetting. As I was self-conscious to begin with, and now terrified, I told my Mother about the situation and she said quite calmly, “He’s out of his mind; you have my permission to not go at all.” That was enough for me. I never went to see him, and, although he did become something of a nemesis, the welcome support from my Mom enabled me to defy that particular authority figure (which was not a natural thing for me to do back then).

In college, I was amazed at how some of my peers were just going berserk with new-found freedom–crazy over-indulgent behavior that sometimes evolved into self-destruction.  I was having a great time, but didn’t feel drunk with freedom because I had actually been afforded a lot of independence while in high school. No hard curfew and a general policy that, as long as I was responsible, I could pretty much do my own thing. I had friends whose parents would flip out if they weren’t home by midnight. I remember my Mom’s explanation about why she didn’t worry if I was out late, “If something happens to you I’ll hear about.” This was a simple and coolly logical approach; it’s one I may have trouble replicating as a parent, but it worked for her and ultimately was a gift to me.

My Mom was an entrepreneur. She went into business with her kid sister, which is why I sometimes came home to an empty house as a kid. The business lasted for 35 years and, besides my Father, it was clearly the passion of her life. She traveled all over the world in connection with the business, met a myriad of interesting people and forged her own path; this after her previous life of being a doctor’s wife which she found unfulfilling until she went off to work. She’s retired now but she keeps busy wheeling and dealing, happily selling the art, books, jewelry and other collections that she’s so happily accumulated over the years.

I can’t say that my Mom always knew exactly what she was doing as a parent, but I now understand that no parent ever really does. I do know that she’s always seen the best in me no matter what, and that’s not a bad place to start.

Dan Levitz has been a Chappaqua resident for 11 years. Lorraine Levitz, at 88, can most likely be found in Lower Manhattan on her daily two-hour walk.