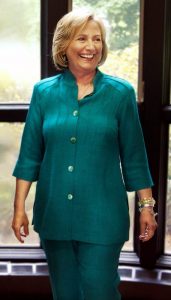 “I am very pleased to hear that Hillary Clinton is running for President of the United States. It would be a tremendous honor to have a sitting President, a past President and a sitting Governor, all living in New Castle. I was humbled when Hillary swore me in as Town Supervisor of New Castle, and at the time I said that I would happily return the favor by attending her inauguration as President of the United States. I applaud her distinguished career in public service and wish her the best during the upcoming campaign.”
Robert Greenstein, Town Supervisor, Town of New Castle

“I am thrilled to hear about Hillary Clinton’s decision to run for President of the United States and to therefore become…the very first woman president!! Starting with the first time I met the Clintons after they had just moved to Chappaqua, and I was standing outside of my firm’s office (which was then located on South Greeley Avenue), and then throughout the years and the many by-chance meetings while shopping or dining out in town and of course, at all the Memorial Day Parades–I have always felt it a real honor to call Hillary Clinton my “neighbor.” And, a true neighbor she is! Hillary is a warm and friendly presence here, a wonderful role model for our daughters (and sons) and she goes above and beyond–always “shopping local” as an enthusiastic supporter of our business community and our community overall. I couldn’t be more excited!! Go Hillary… all the way to Pennsylvania Avenue!
Dawn Dankner-Rosen, President, Chappaqua-Millwood Chamber of Commerce

“I am very pleased that Hillary Clinton will be running for President of the United States, both as a long-time supporter and her State Assemblyman. Secretary Clinton brings the skills we need in a President to tackle the challenges that face the United States and the world. In addition, the Clintons have played an important role in raising the profile of our region, attracting national attention. To have a sitting President of the United States as our friend and neighbor in Chappaqua would highlight the hamlet’s historic and unique charms. I believe her presidency would be a great step ahead for Chappaqua and the entire country.”
New York State Assemblyman David Buchwald, D-Mt. Kisco

“Hillary has devoted her life’s work to public service. Among her many accomplishments, Hillary was a great partner in delivering relief to New York after September 11th and health coverage for more than 6 million American children. She has advanced women’s and gay rights domestically and internationally, and effectively represented the United States on the world stage. It has been my great honor to call Hillary Clinton my friend and constituent, Senator, and Secretary of State. I will work hard to ensure that in two years, we call her “Madam President.”
Congresswoman Nita Lowey, D-New York

“Hillary Clinton has been a lifelong champion for middle-class families, an advocate for the underserved, and a fighter for civil rights. Her record reflects the steadfast belief that every American, no matter their race, gender or ethnicity, should have the right to achieve economic security and opportunity. She is a tested leader with the resilience and experience to be a great President. I was honored to work closely with her in the Clinton Administration, during a time of historic peace, prosperity and progress for our nation. Having known and worked with her for over 20 years, I wholeheartedly endorse Hillary Clinton’s campaign for President.”
New York Governor Andrew M. Cuomo

“I was there the night Hillary won her first, tough bid for Senate after months of hard work. And now I hope to be there when she declares victory in November of 2016, as the first woman president-elect in the United States. Make no mistake–she’ll win. And when Hillary wins, we’ll all win. The country will have a president that values the middle class and fights for families the way Hillary has her entire career.
U.S. Senator Chuck Schumer, D-New York

“I am thrilled Hillary Clinton is running and will do everything I can to help make sure she makes history as our first woman president. I will never forget when I heard then-First Lady Clinton speak about the need to improve the lives of women and children around the globe. Her clarion call that women’s rights are human rights was heard around the world and inspired me to choose public service. I cannot wait to help her in the Senate make her vision for a better world a reality. We’re entering a new era of our history with challenges distinct from those we faced even just eight years ago. Our next president must have the intellect, passion and experience to confront what’s ahead and secure the promise of equal opportunity for every American. Hillary shares that vision for a better future, one that we believe in for families and for ourselves. It’s time for us to do what we can together to make that vision a reality for middle class families. It’s time to get to work.”
U.S. Senator Kirsten Gillibrand, D-New York

“I was raised with the belief that living in this country was one of the greatest blessings anyone could have.

Today, for so many families, the path to lasting prosperity is unclear.

Families have fought their way back from tough economic times. But it’s not enough — not when the average CEO makes about 300 times what the average worker makes.

Everyday Americans need a champion, and I want to be that champion.

I’ve spent my entire life standing up for women, children, families, and anyone who needed a little help along the way. That’s what this campaign will be about, and that’s what I’ll do every single day as your president.

It’s time for us to fight for people like my dad, who ran a small business and committed himself to building a better life for his family. People like my mom, who relied on the kindness of others to get through a tough childhood — and like my baby granddaughter, who deserves to grow up in a country where every single kid has the opportunity to live up to her or his potential.

This won’t be easy. And I won’t take anything for granted. I’m going to work my heart out to earn every single vote, because I know it’s your time.”