So now that the GOP convention is over, we can focus on why America needs to elect Hillary Clinton for POTUS.  Here goes…we’ve compiled our Top 10 reasons (+2) to vote for Hillary: 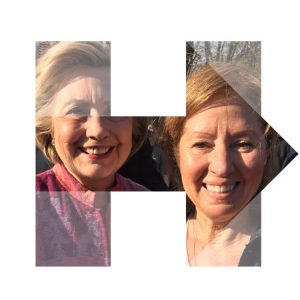 Okay, we couldn’t whittle the list down to just 10! There are even more reasons we wanted to add, like protecting the environment and insuring LGBTQ rights which are equally important. She’s obviously the smartest & most experienced candidate to run for POTUS in our lifetime, so let’s do the right thing and elect Hillary! Not voting is not an option!

Chappaqua’s own Cynthia Metcalf (bottom photo) & Ann Styles Brochstein have well over 3,000 twitter followers (from all over the world) for their frequently irreverent and witty tweets in support of their hometown candidate for POTUS.  Metcalf and Brochstein are also long time Chappaqua residents, 18 & 24 years respectively, and moms with six great kids between them. When they’re not tweeting & posting, Cynthia is a soccer mom of one and college-tuition paying mom to three & empty nester Ann is a doggie mom. You can follow them on Facebook at: Chappaqua & US 4 Hillary NOW, and on Twitter@Neighbors4Hill.