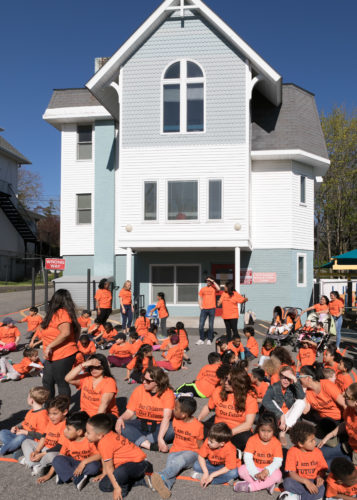 Ossining Children’s Center has a keen eye on the future, but they are also celebrating their rich history–a history of women’s empowerment. The Ossining Children’s Center was founded by the women’s association of St. Paul’s Episcopal Church in 1895 as the Christ Child Day Nursery and Bethany Home. At that time, Ossining was home to many widowed immigrant women who wanted to work to support their families, but “day care” did  not exist.

The story of Ossining Children’s Center began nearly 120 years ago as a response to the needs of working immigrant mothers. It is now a crucial resource for all families, providing nurturing and educational care for children 6 weeks to 12 years old.  Through the years, the community has generously supported our mission to keep high quality childcare affordable for working families.

We’ve aimed to support women of every socioeconomic status since our inception an we know that families and mothers have to make difficult choices regarding their careers and we do our best to provide an inclusive environment for all women.

Edith Baker played a leadership role over the course of 60 years of involvement with OCC, in seeing the Center through difficult times and running pivotal projects in the Center’s history. She served as board president four different times. In 1948, Edith Baker was among the Board members who believed strongly that the childcare program was an important service to the community. Edith, herself, was a working mother and had served as treasurer of her father’s company for many years. When the existence of the child care program was threatened, Edith spearheaded the “Sponsoring Committee” which took over responsibility for running the child care center. A special campaign raised the needed funds, the Board of Education gave the use of space in Park School, and the Ossining Children’s Center was incorporated as a separate entity.  Although Edith passed away in 2004, her legacy lives on.

Jessica Yanqui-Zhinin found herself pregnant at 17. She wanted to finish high school and to go college. When she was accepted to SUNY Binghamton, she did not anticipate she would be able to attend, but Jessica didn’t want to be another statistic. Fortunately, she found the Ossining Children’s Center. At OCC, she not only found a village but an extended family. When Jessica dropped her daughter Nube off in morning, she knew Nube was in loving hands. The caring teachers gave Jessica constant support helping with everything. The office door was always open offering more shoulders to lean on. Ossining Children’s Center gave Jessica the stability and support to earn dual masters’ degrees. She is now a teacher at Ossining High School.

The Future is Female

Child care is a vital factor in a woman’s ability to be a productive worker, and thereby being able to improve her family’s economic security. For more than 50 years, the Ossining Children’s Center (OCC) has been in the forefront of advocacy for public funding for child care.

Thanks to advocacy by Ossining Children’s Center families who spoke at the Northern Westchester 2019 Budget Hearing, Westchester County recently re-opened the “Title XX” Child Care Subsidy Program, which had been closed to new applicants since 2016. Title XX makes child care subsidies available to families who make slightly more than the income ceiling* for the Low-Income Child-Care Subsidy Program.

Currently, two Ossining families have applied for Title XX child care subsidies from the Westchester County Department of Social Services to help them to keep their children enrolled at OCC.

Last month, we announced a $17.8 million capital campaign to build a new child care and education center at 32 State Street. The Center, which has raise $12.8 million to date, is seeking support from the community to reach their campaign goal. This facility will serve an additional 50 children and bring all of the OCC’s programming to one central location. Over 75 of OCC’s Children participated in the choreographed dance in front of a large banner featuring a rendering of the new space. It’s a privilege to work in a town that truly values children and families. If you’d like to learn more about the programs and services offered by the Ossining Children’s Center, visit www.ossiningchildrenscenter.org 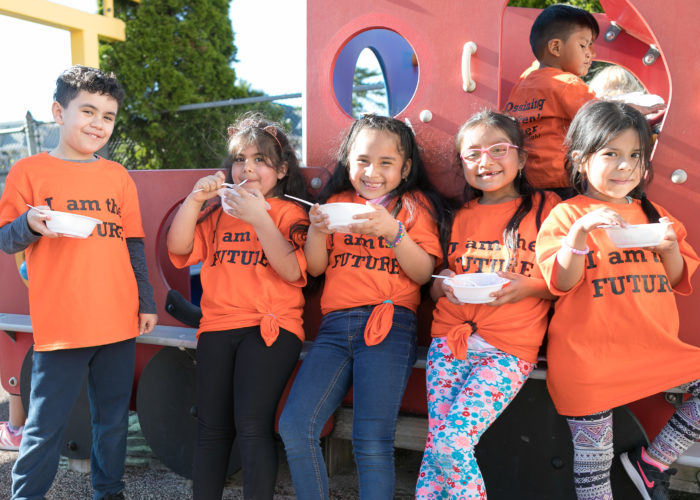 More than 75 children from the Ossining Children’s Center (OCC) joined together on April 24 in a choreographed dance to kick off OCC’s capital campaign to build a new child care and education center.

The campaign, which is titled Our Children. Our Future. The Ossining Children’s Center Campaign, is seeking to raise $17.8 million. To date, OCC has raised approximately $12.9 million. Groundbreaking for the new facility is scheduled for later this spring.

“It is a privilege to work in a town that truly values children and families,” said Howard Milbert, Executive Director, Ossining Children’s Center.

“It is so exciting that the children and teachers will have a facility worthy of the high-quality work of the Center,” said Campaign Co-Chair Rebecca Samberg.

“This new child care and education center will be a game changer for the entire community,” said Campaign Co-Chair Marilyn Wishnie.

Last August, OCC unveiled plans for the construction of a new 27,000-square-foot building that will enable it to consolidate its programs under one roof. Centrally located in downtown at 32 State Street, the new center will replace operations currently housed at two 120-year-old buildings OCC owns on South Highland Avenue, as well as space it rents at a nearby church.

The new 2.5-acre site at 32 State Street was acquired for $1.8 million and donated to OCC by a long-time generous benefactor. An existing building on the site has been removed. The new building will house all of OCC’s current programs while meeting the growing need for infant, toddler, preschool and after-school care in Ossining. The projected enrollment for the new facility is 200-222 children. OCC’s current enrollment is 148.

Designed by KG&D Architects of Mount Kisco, the attractive three-story building will include nine classrooms, five toddler and infant rooms, four outdoor play areas, staff and administrative offices, a multi-purpose room, conference room and kitchen. There will be 22 on-site parking spaces for parents, staff and visitors. Additional parking will be secured at a nearby off-site location.

A new modern facility will also attract more families from a wide variety of income levels, allowing children from throughout the community to grow together, and enabling OCC to serve more families in need. For more information about the programs and services offered by the Ossining Children’s Center, visit www.ossiningchildrenscenter.org

Howard Milbert, Executive Director of the Ossining Children’s Center, has spent his career advocating for children and parents, especially low-income working parents who are striving to improve their families’ economic situation. He is known throughout New York State as a public policy expert on and advocate for high quality child care.