Volunteering, Shopping and Turkey OH MY!
By Heather Skolnick

Thanksgiving marks the beginning of the holiday season for many. Thanksgiving triggers autumnal images of softly falling leaves and a feeling of chill in the air–a sure sign of what’s to come weather-wise. It signals the beginning of the holiday shopping season for those in retail with a daily countdown to Christmas. And for many, it evokes memories of meals and unique traditions that encircle the meal. These Thanksgiving traditions can be pretty wide and varied.

As a child, my Thanksgiving traditions were pretty straight forward–extended family came to eat. And eat we did. We enjoyed turkey with the standard carbohydrate-laden fixings, and enough desserts to satisfy the sweet tooth of a small nation. The meal was not complete until we all suffered from indigestion–all before 7 p.m. It was what we did before the meal that was different. Each year, my father and I awoke earlier than most on a holiday, put on sweats, and took a short drive to a neighboring town. We then participated in a local “Turkey Trot”–a five mile run in an attempt to help offset the meal we’d be eating a few hours later. That was our tradition.

My husband’s family didn’t believe in the “Turkey Trot”–instead, Thanksgiving was all about football. Neal, his brothers, cousins, dads and friends all got together to play a serious game of touch football. The colder, wetter and muddier it was outside, the better the game. While their game would end before dinner, the trash talking around that game could last an entire year. Area resident and brother Lyle said, “We would even keep track of records, from most touchdowns, consecutive games with a reception, best play, to worst mistake, and most times ‘giving in’!” Building on the football theme, after playing, they would all return home and begin watching the football games on TV before indulging in their meal.

Other Thanksgiving traditions abound as well. The annual Macy’s Thanksgiving Day Parade is, of course, available to one and all on TV. However, heading in to the city to watch it “live” is a popular tradition for some in our area. From seeing the balloons to watching the performers, the parade route is packed with onlookers of all ages.

Signaling the official start of the holiday shopping season, Black Friday shopping has long been a tradition for some. Amazing short-lived deals often abound on that day, with stores opening early and staying open late. Eager to squeeze an extra shopping day in before the holidays, shopping on Thursday evening has more recently become another (albeit, controversial) option. Many big-box retailers and shopping centers are now open for post-dinner shopping. 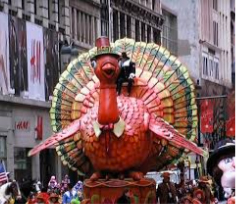 Katonah mom Samantha Holcman and her family spend their Thanksgiving doing a little bit of each of these things. They start celebrating at the Thanksgiving Parade. Samantha said, “It’s such an exciting, iconic way to spend the holiday and so easy for local New Yorkers…my kids love it and we love to watch the parade through their reactions.” Later, the Holcman family dines back in Westchester at one of our fabulous local restaurants, choosing a different restaurant each year. Lastly, Samantha’s husband Brad and his mother go shopping and scour stores for bargains, sometimes not returning until 10 a.m. the next day! Of shopping Thursday night, Samantha said, “For people that like a deal, it’s a unique and very fun experience.”

Volunteering is a wonderful way to enjoy the spirit of Thanksgiving while enjoying some quality family time. One option is to spend part of the day together, helping to provide a meal for others. Neighbor’s Link coordinates a food drive in anticipation of the holiday. On the actual day, they provide a full Thanksgiving meal and a full bag of groceries to take home.

Armonk mom Abby Hollander will be doing just that. She, along with her family, will be serving Thanksgiving meals in coordination with local religious affiliates. Abby decided to begin volunteering on Thanksgiving because “I thought it was really important as my son turns five this December to expose him to those less fortunate and show him what he can do to help. “ She continued, “We want to teach him to appreciate and be thankful for what he has. We really want him to see how he can help make the world a better place.  It’s a tough concept to explain to such a young child so we hope by showing him and participating he will also feel proud that he helped even in a small way.”

The common theme threaded through all of these traditions can clearly be identified as spending quality time together as a family and/or with those who are most important to you. So whether you are a traditionalist in your Thanksgiving approach or not, let’s remember that Thanksgiving is about being surrounded by those who are important to you and appreciating the moment.

Heather Skolnick is a New Castle resident with her husband and three young children. They will be enjoying their Thanksgiving holiday surrounded by family and food, with a little football mixed in.