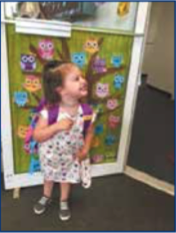 “My stomach feels funny.  What if no one likes me?  What if someone is mean to me?  I think I am going cry. I should turnaround. I am going to close my eyes. Okay I am in. Okay let mommy’s hand go.”

Choosing to be courageous starts at an early age. We see this bravery in our World Cup students every day. From choosing to walk through the doors on their first day of preschool to asking to join in a game with other children, to committing to their first back handspring, even our youngest students amaze us with their valor. As parents and as a community, we should nurture this courage by giving our children the opportunity to make those spirited choices. Challenge them to try new things like a new sport or a new vegetable from the farmer’s market, and make sure to praise them when they  do. Introduce them to the brave role models in their neighborhood, from the fireman and  policeman to their local politicians. Show courage by your example. Explain to your child how you don’t just follow the crowd but follow your own path based on your  beliefs. www.worldcupschools.com

When John Orozco was eight years old he began making the journey from his home in the Bronx to Chappaqua on a regular basis.  He had set his sights on becoming a world class gymnast and chose World Cup as the place to do so.  Today, Orozco, 19, is living and training at the US Olympic Training Center in Colorado.

The program at the Center is extremely rigorous.  All athletes are required to attend two sessions of training daily for a total of five hours.  “It’s a very intense period of training leading up to the Olympic games,”  Orozco observed.  “We’re trying to make my routine and skills very consistent,” he added.  Improvement is facilitated by the coaches and video monitors in the gym which allow the athletes to replay footage instantly.   After the completion of the Olympic trials on July 1, ten gymnasts will be selected to represent the US at the 2012 Olympic Games in London.

Upon graduating from high school, Orozco weighed his options and choose the Olympic Training Center.  “There will be time for college after I achieve my dream,” he said.

Whenever Orozco returns to NY, he carves out time to visit his friends at World Cup.  “Chappaqua NY is like my second home,” Orozco mentioned.  He thoroughly enjoyed  being a member of the boy’s team and found the ambiance in the gym to be both competitive and supportive.  When hunger strikes, he can often be found at Pizza Station or Mario’s Pizza, polishing off a slice.

Jason Hebert, the head coach of the boys’ team at World Cup remembers distinctly the day when Orozco first came to the gym.  Hebert saw Orozco’s innate “raw talent” immediately.    “This was a really special, talented kid,” he noted.