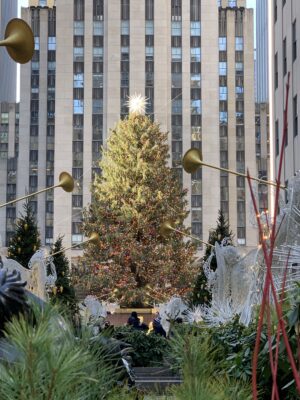 One fall day in Bedford, a brisk cool breeze

Send a spruce cone tumbling from some tall green trees.

Its little seeds landed and sprouted some shoots,

Those delicate saplings were protected from harm,

Because they planted themselves on a Christmas Tree Farm!

On Winkler’s Farm they grew, with lots of sun and rain,

Except for one tiny tree that was really rather plain.

Little Sprucie stayed small while the others trees spread.

As they grew tall and fluffy he was spindly instead.

As the others laughed at him and covered him in shade,

He felt ashamed and sad, and a little bit afraid.

The seasons changed and the other trees continued to grow.

Each December families came with squealing children in tow.

Wearing mittens and hats with their cheeks flushed red and bright,

They searched the fields to find a tree that seemed just right.

Finally one year Sprucie thought, “I can be a Christmas Tree!”

And as children rushed by he waved his needles to say, “PICK ME!”

As they ran to bigger trees with their faces half frozen,

He wondered why it was that he was never chosen.

Years went by and the littlest spruce slowly grew high,

And Winkler’s farm was changing too as time passed by.

One summer Sprucie saw a sight that he feared.

Tractors and bulldozers and backhoes appeared!

Trees were knocked down with a loud crash landing,

But Sprucie was lucky and was left still standing.

Builders put up lots of houses and a real neighborhood.

Sprucie was next to a big house all painted white,

And a bright yellow moving van appeared to his delight.

He was happy that he would no longer be alone,

And finally have a family they he could call his own.

Chris and Joy Holliday had a girl and two boys,

And they enjoyed climbing Sprucie and making lots of noise.

As Hope, Nick and Noel got older they had less time to play,

And like the trees on the farm they grew up and went away.

At 35 feet wide the Holliday’s feared he would fall.

A group of people gathered and Sprucie was so scared,

As they gently took him down the neighbors came and stared.

He was tied to a flatbed truck as it started to flurry,

And they drove him away in quite a hurry.

When they stopped two hours later he saw buildings tall as the sky,

He hoped he would hear something that might explain,

But Sprucie was soon hoisted up with a giant crane.

Workmen on platforms wrapped each branch with wire,

And they kept on going as they reached higher and higher.

One week later he noticed a very large crowd,

As they all stared up at him he felt surprised and proud.

As the people roared he realized the honor he had won.

For the littlest spruce realized with awe and with glee,

That HE was the Rockefeller Center Christmas Tree!

His branches were glowing with thousands of twinkling lights,

Towering tall as he brightened the New York City nights.

At last Sprucie was the most famous Christmas tree,

Enjoyed by the entire city and every family.

He always had hope and in his heart he always knew.

That it’s never too late for your dreams to come true.

Susan Stern Kravet is a New York based writer on the topics of parenting, women’s issues and relationships (and the occasional children’s story!)She seeks out the humor in her observations of everyday life.  She and her husband have two sons in their 20’s who provide lots of material.  In her spare time she enjoys photography, gallery hopping, and the pursuit of great cocktail bars. You can read more of her work on her blog at MyMothahood.com 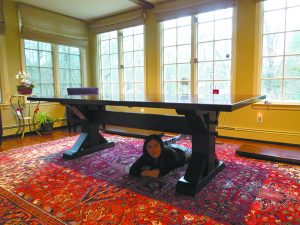 In 2014, when my family and I moved to Kipp Street, two black walnut trees swayed precariously over the driveway and power lines of our farmhouse colonial built in the 1900s. Their roots were exposed in the shallow, allopathic soil and black walnuts the size of tennis balls rained down on us.

Reluctantly, we got the tree removal permit and called Bill Davies of Westchester Tree Life. He told us that the wood was valuable and offered to take the huge trunks to White Oak Farm in Yorktown for milling. 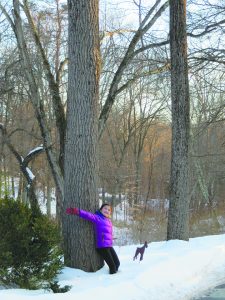 Jason Ballard (My Minds Design, Grafton, Vermont), a talented woodworker, had made built-ins and an antique barn beam mantle for our former house on Birch Lane. We asked if he could create an eight-foot dining table for the new house and he was thrilled to work with wood from our homegrown trees.

Bri Hart at White Oak Farm selected the best pieces for the table top for milling into nine foot planks. The wood was sawn to Jason’s specified dimensions and kiln dried for two months. When it was ready, Bri declared this was some of the best walnut he had ever seen. Serendipitously, another of Bri’s custom timber cuts was ready to head north and we happily piggybacked onto that delivery to get our 900 linear feet of walnut to Grafton. 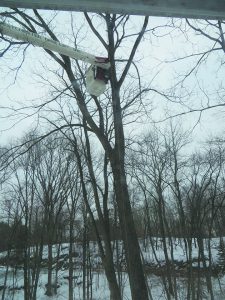 Maggie Nielsen was helping us furnish our home, on land that was part of the extensive Kipp family holdings from the mid-1700s. She designed a casual dining room for daily homework, reading and meals by our busy family of six. It took several discussions and wood samples by mail to get the table’s vintage character, the stain and the finish figured out with Jason. Maggie had suggestions about the table’s base to match the tone we had set with the dining room’s new paint, windows and rug from Caravan Connection in Bedford Hills.

After hours of Jason’s expert craftsmanship, the finished table took up almost his entire workshop during the weeks to took to dry all 25 coats of his signature polish. He delivered it in January 2016, and we were so excited to see how its proportions, color and warm feel were all in perfect harmony with the 100 year old house.

The table had finally come home. 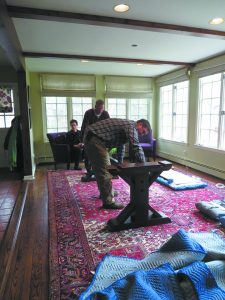 Our “farm to table” table soon will be joined with a beautifully handcrafted mirror, a sideboard and chairs, all made from this wood harvested from our property. They will become true family heirlooms. The organic, creative collaboration between Bill, Bri, Maggie and Jason brought the walnut trees that were growing outside into the heart of our home.

Dana Y. Wu, a Chappaqua mom of four, is an author, visual storyteller and local volunteer. Her not-for-profit management career includes experience at the New York Public Library. A life-long New Yorker, she graduated from Stuyvesant High School and Columbia University. She pursues her writing with the vibrant, creative community at the Jacob Burns Media Arts Center.