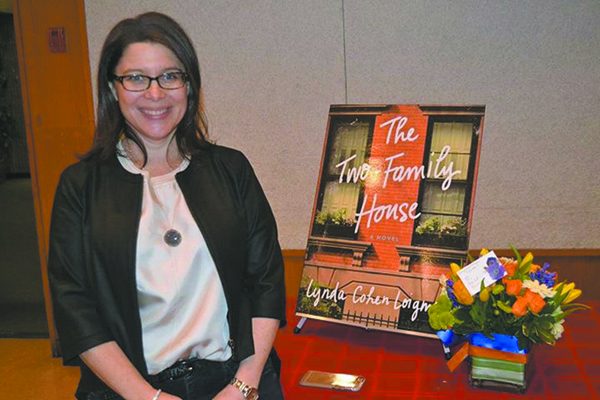 On March 8, 2016, surrounded by friends, family and admirers at the Chappaqua Library Theater, New Castle resident Lynda Cohen Loigman officially launched The Two-Family House, an engrossing family saga about two brothers and their families living in postwar Brooklyn that has drawn rave reviews for its compassion, thoughtfulness and complex, vivid character development from the likes of the Associated Press, Publisher’s Weekly, Bookreporter, Booklist Reviews, RT Book Reviews and the Jerusalem Post.

“I am so grateful for the tremendous community support I have received, both from the Chappaqua Library and our town residents,” Loigman said, after reading several passages from the book and answering attendees questions about its background. “It was a thrilling night!”

From Idea to Manuscript

Loigman, who lives in Chappaqua with her husband Bob (“my biggest advocate and Googler”) and children Ellie, 17, and Charlie, 13, did not set out to be a novelist. A graduate of Harvard College and Columbia Law School, Loigman practiced trusts and estates law at a large Manhattan law firm for eight years, and was then a legal recruiter. She had written poetry throughout high school and college –and considered writing children’s songs because of her facility with rhyme–but had never even taken a creative writing class. She had a story in her head, though, that would not release its grip for 16 years.

Loigman’s mother grew up with her sisters in a two-family house in Brooklyn shared with their three cousins, also girls. The mothers got along well, the six cousins practically siblings. But Loigman’s grandmother always spoke of how she would have liked a boy. Loigman wondered: what if one family only had girls, and the other only boys? Would each crave what the other had?

After losing her mother, Loigman decided to finally write the story that had been evolving in her mind and which she had been bouncing off friends. She registered for “The Writer’s Essential Selves” course at the Writing Institute at Sarah Lawrence College, a weekly, unstructured class in which the students wrote and discussed whatever they chose. Six and a half years later, Loigman remains a student in the class.

That first class “was a magical, unbelievably talented group of people,” said Loigman, crediting it with truly teaching her how to write. When she began, she had only written the “hook” of her story, yet was encouraged by her teacher and classmates to continue until the story was told.

The Path to Publication

Loigman acknowledges her luck in getting her book noticed and eventually published. Nearing completion of The Two-Family House, she registered for Sarah Lawrence’s June 2014 Publish and Promote Your Book Conference, which included interactive panel discussions with literary agents, editors and publicists and three “pitch sessions” for each registrant. Coincidentally, she was assigned to meet Marly Rusoff, the agent for an old acquaintance. Rusoff liked that Loigman’s story had that “hook” as well as a clear beginning, middle and end, and asked to see the manuscript upon its completion.

Loigman sent the manuscript in late July 2014; two days later, Rusoff called after reading the book in a day and offered to represent her. At Rusoff’s suggestion, Loigman wrote an essay about the inspiration behind the book, which with the manuscript was sent to editors that August.

The Two-Family House was bought that November by editor Jennifer Weis of St. Martin’s Press. The book would be released at the end of winter 2016 (one of three publication periods); cover art was chosen, and advance copies were sent out for feedback and cover “blurbs.”

After a launch-week book signing at Scattered Books in downtown Chappaqua, scheduled spring promotional events included (at press time) author readings at Sarah Lawrence, UJA-Federation of New York, the Museum at Eldridge Street, Temple Israel in Westport, and Brookline Booksmith in Massachusetts. Loigman has also received a great deal of support–interviews or “guest blogging” appearances –from writing and book club blogs and websites. The Jewish Book Council has even created a discussion guide for The Two-Family House, which was listed under “Best Books of the Month” in the Goodreads March Newsletter.

Loigman has already started work on her second novel. But in the interim, she hopes to meet someone with a connection to Natalie Portman, who she envisions as the perfect “Rose” in a film adaptation of her debut!

Debra Hand is a longtime writer and editor for Inside Chappaqua, thrilled for her friend’s successful debut and inspired to follow in her footsteps!