It’s not easy being the daughter of The Points Mom. Whether I must snap tons of photos for my mom’s Instagram or listen to my mom talk shop constantly, my job as “The Points Daughter” is somewhat difficult. At restaurants with my friends, before COVID-19, I was fearful that I would pull the wrong card out of my wallet. I always prayed that I was not the family member that must plead guilty to my mom’s text “who used the blue card for dinner”? It’s hard to hide the mistakes when the bill comes. Luckily, the extra time with quarantine has pushed me to memorize which card to use when: gold for food, blue for everything else. Needless to say, she makes us use our credit cards for everything. I don’t mind though, she pays my credit card bill!!

My mom is always looking to expand her audience, especially with teenagers. She would insist my friends follow her on Instagram (thepointsmom_) and like her Facebook page. My mom has also been spotted in her prized t-shirt donning The Points Mom logo. She often wears this shirt at big tourist attractions, but now on Zoom calls. Can someone else walk next to her please?

People are always asking my mom for advice. She does Zoom consultations and gives lectures and her clients never hold back to shoot her texts and calls. I don’t know how anyone can listen to her talk about points for so long. However, she does seem to know what she’s talking about. I have picked up on some of her lingo like “maximizing points” so that whenever my friends ask why I use this or that card, I can truly answer as ‘The Points Daughter’.

My mom even offers advice to strangers when she sees them using the wrong card at the supermarket, or, pre COVID-19, at the airport paying for bags. She makes sure to offer advice about using “the right card.” My brothers and I make sure to run away or hide when my mom does this.

Travel is one of many things that I miss. My mom alleviates lots of the stress that comes with travel. TSA PreCheck and Clear offers us expedited security checks. My family no longer needs to yell at one another to rush out of the house, or wake up 30 minutes earlier to beat the line. Airport lounges are also the best; we get them for free. My family gets to stock up on nuts and pretzels, recharge our devices, and relax before our flight. But, I mostly like them for the free food.

Unfortunately, airplane seats are never favorable. We often arrive at the airport with “no seats,” a price you may pay for booking using miles. We frequently end up sitting far apart. In fact, we often have one person in row 5, while another is in the back row in a middle seat; this person is usually my dad. However, sitting alone taught me at a young age to fare for myself on a plane. I have even mustered up the courage to order my own snack box. I know what card to use and exactly how much I need to spend on each plane ride. My brothers and I always have to buy snacks on the plane to use up free airline credits–even if we aren’t hungry.

My mom is always doing things for “credit.” On one trip, we had to order breakfast from a hotel down the road to use up my mom’s free hotel credit. And when I go to my yearly swim meet in Florida, we stay at a Hyatt, while the rest of my team stays at the Hilton, because we get free nights with my mom’s Hyatt credit card. Luckily, over the years, my mom has convinced other swim moms to get a Hyatt credit card too.

As annoying as her know-it-all remarks are, she knows her stuff. One day, I hope I am as passionate about something as my mom is about credit card points and travel. I am inspired by her commitment in helping other families travel for free. It goes without saying, but thank you mom. Our family vacations have been great, even if you take way too many pictures. I am excited to see what you have to bring in the future and I am proud to be The Points Daughter. 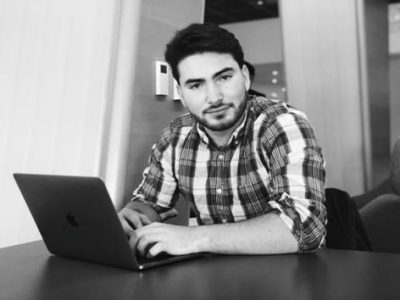 Vacation planning isn’t easy. Deciphering the complicated world of frequent flyer miles and credit card points, partner airlines and excursion fares with built-in stopovers seemingly requires an advanced degree. During his Briarcliff High School days, however, it was Rob Karp’s hobby. That hobby became a passion, and that passion turned into a thriving business before he was out of his teens.

Beyond balancing school, standardized tests, varsity soccer and the debate team, Karp (BHS ’15) had another commitment – leveraging airline and credit card points for free travel.  He had always loved flying, even as a young child.

“My true passion has always been planes and aviation; when other kids were playing on their Xboxes I was sitting on a computer being a virtual pilot on Microsoft Flight Simulator,” Karp recalled.

Fascinated with all facets of airline business, and aware of “these things called miles” which could be earned and used to pay for flights, he spent middle school Friday afternoons calling airlines’ customer service numbers with questions and poring over online blogs. Karp helped his father research business travel, and with his father’s accumulated miles got his entire family to Israel business class with a multi-day stopover in another country.

When area airports closed following Hurricane Sandy in late 2012, Karp succeeded in booking his family to Minneapolis for a bar mitzvah by routing them from Westchester County Airport, which opened first, through Atlanta. A relative was impressed and suggested he turn it into a business; three weeks later, a day shy of his 15th birthday, Karp Enterprises LLC was born.

Demand grew quickly as word of his miles and points wizardry spread.  Known locally as “the points kid,” Karp’s early success and decision to charge for services was largely due to word of mouth in the Briarcliff Moms and Chappaqua Moms Facebook groups. He spent up to 30 hours every week analyzing customers’ points and miles, intended destinations and dates, researching creative ways to book flights for no or drastically reduced cost. Eventually he used money earned as a soccer referee to hire someone to build a website.

Karp also familiarized himself with credit card “points” programs, offering paid consultations to help clients maximize point-earning potential based on spending habits. And he continued to immerse himself in the aviation business; for his BHS science research project, Karp worked with Delta’s Domestic Revenue Group, analyzing “hub” ramifications of airline mergers and interning for two summers at Delta’s Atlanta headquarters.

Word of the young entrepreneur’s expertise spread. He was featured by Bloomberg TV and Fortune.com, and as a BHS junior was named a “Westchester Wunderkind of 2014,” celebrating the area’s brightest young professionals under 30. By the time Karp graduated from BHS in June, 2015, Karp had worked with 100 customers, all on his own.

Spreading His Wings: Expansion during the College Years

Cornell University’s School of Hotel Administration (“SHA”) was a perfect fit for Karp. After his BHS graduation, he rebranded his company “MilesAhead,” but shut down 90% of his business the first semester.

“I wanted to start college with no strings attached,” he said. “It was one of the best decisions I’ve made, because stepping away made me realize how much I missed the business.”

Late that first semester, he hired three students part-time who shared his passion for aviation to help him research and book flights. Shifting his focus to luxury travel, in January 2016 Karp partnered with large national agency Valerie Wilson Travel, a member of the Virtuoso network, which provided MilesAhead with access to special airline values and hotel perks. Karp forged his own relationships with travel vendors, his team now having visited roughly 300 properties.

“I saw an opportunity,” Karp said. “Customers whose flights I was booking were booking hotels elsewhere, but said that they would be happy to give me the business if I were to provide it.” Building industry connections allowed him to expand MilesAhead’s offerings to hotels by the start of sophomore year.

Through 2017, his team was mostly Cornell students working part-time; Karp eventually became busy enough to hire a full-time assistant and independent off-campus “contractors,” also aviation enthusiasts, he met via connections. MilesAhead developed a presence on campus, and this past year was the first student owned and operated company to exhibit at the Hotel School Career Fair.

Even during his BHS days, Karp recognized the need to keep clients happy, for example driving out to JFK himself to resolve a ticketing glitch. “That was an early example of my company’s commitment to customer service.”

He wants to make things as easy as possible for clients, and finds that MilesAhead’s use of the AXUS itinerary management app is a “key part of the customer experience.” Clients can download AXUS to their phones and view multiple trips–all flight, hotel and excursion information–and get updates on changes.

Karp has grown his company considerably–this spring about a dozen part-timers–to cover customers’ travel needs before, during and after their trips. MilesAhead is now comprised of Advisors who build trips, the Concierge Team, which finds and books anything from private guides to dinner reservations, and the VIP Team, which deals with logistics such as check-in and boarding passes. 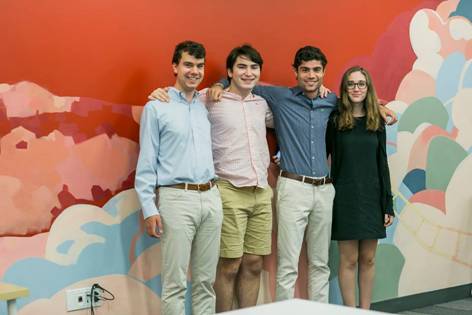 The Sky’s The Limit

As a college student, Karp managed to devote 50-70 hours a week to MilesAhead, but upon his graduation this month is poised to “hit the ground running.” He has secured Manhattan office space and will have six full-time employees, all with the company for over two years, as well as additional part-timers. MilesAhead’s growth has not gone unnoticed; Karp and his company have been featured in or on CBSTV, the Cornell SHA magazine, the New York Times, and Forbes.com.

“I’m a full-time business owner and CEO.  But it’s been one of the best learning experiences–being a student, a ‘college kid,’ and business owner all at the same time. I’ve learned to prioritize and what’s important to me,” he said, noting his evolving role. “Now my focus is building, developing and training my team and growth. We’re always looking for awesome new young talent, and have exciting and grandiose plans to keep expanding. We’re still savvy and thrifty,” Karp added, “but with building our luxury services, we have maintained our commitment to keeping that personal touch.”