An all evening January fundraiser featured a line up of wonderful women comedians and a male emcee who took no prisoners during a time when unique Planned Parenthood faces dire challenges. Headlined “Dirty Mouths Dirty Martinis Comedy Night,” the packed event in Irvington raised much needed funds for Planned Parenthood of Hudson Peconic, and was chaired by Susan Chatzky of Briarcliff Manor. I caught up with Chatzky post-even to ask her about the eve’s purpose and goals:

1. Why a Comedy Night as a theme during a time when Planned Parenthood is under attack?

SUSAN: I love stand-up comedy. It’s probably in my blood. My grandmother was a comedienne and my grandfather was Dean of The Friars Club in NYC. To me, it’s the most honest art form. I wanted to start a tradition of comedy fundraisers for Planned Parenthood. Last year we hosted a reading of The Vagina Monologues and people loved it. This year I waited until the anniversary of my Grandmother’s birth (and death 1/7/1911-1/1/2010) and had a stand up night in her honor. We’re going to make it an annual event…People who support Planned Parenthood already know what we do and the challenges we’re facing. I just want to show them a good time in exchange for their support.

2. Tell us more about why you opened the evening featuring your grandmother. Not hard to see why; I thought she was awesome, but do tell.

SUSAN: Thank you! I think she was awesome too! My grandmother was born in Paris 1/7/1911. Her family emigrated to the US in 1913. She started working in vaudeville when she was 13 as a dancer. When she would mess up or get lost, she would tell a joke. Then it became a thing. She and my grandfather, Buddy Howe, had an act together, when he went into the Army she kept it going on her own. When he got back, they realized she was better as a one-woman show.

Buddy became her manager and agent and went on to become CEO of ICM in the 1970’s. Jean was the first woman to earn $10,000 for an appearance on Sullivan!Jean was a progressive, liberal, Democrat. She spent her time and her money contributing to causes she believed in. She taught me to do the same.

3. Can you clarify what is at stake right now and why fundraisers for Planned Parenthood are critical at this juncture.

SUSAN: With Republicans in all three branches of our Executive Government, there’s little doubt that Medicaid will no longer cover Planned Parenthood health centers. This is what they mean by “defunding” us; we don’t get a blank check; we get paid by Medicaid for the services we provide. Roughly one third of our patients are on Medicaid.

Even with those Medicaid payments, we need to fundraise, because Medicaid payments do not fully cover the cost of the services. We also turn away no one. People should know that Medicaid doesn’t cover abortion services. Every abortion is paid for by the patient, or if she’s unable, Planned Parenthood will use donated funds.

4. What are your goals for the funds raised for the immediate future?

We are also beefing up security in light of the current political climate. Since the 2015 shooting (at a Planned Parenthood Center) in Colorado Springs, we’ve become very sensitive to the need to protect our patients and staff.

President Trump et al have also promised to defund us, meaning we’d no longer have access to title 10 funding or Medicaid reimbursement. Planned Parenthood would then have to fundraise to continue to provide care for people who would otherwise not be able to afford it.

On the political side, but having nothing to do with our C3, we hope to strengthen and update New York State law and bring it in line with Roe V Wade. The Reproductive Health Act affirms that NYS law recognizes a fundamental right of privacy and equality which will protect New Yorkers from hostile laws aimed at severely limiting abortion access providers. 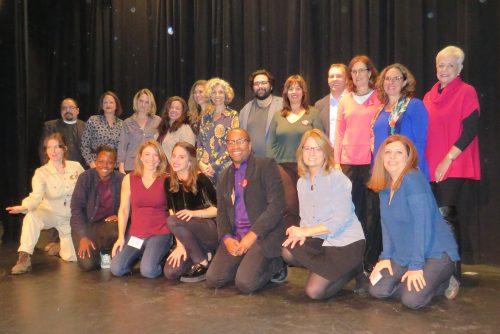