When Jerry Emmett, age 102, took the microphone during the roll call and announced that Arizona cast “51 votes for the next president of the United States of America, Hillary Rodham Clinton,” the crowd cheered and waved signs. Emmett had been born before women had the right to vote, and now was nominating a woman as president.

A lump formed in my throat.

This was really happening.

I have always loved the roll call. Snuck in between speeches and videos, no longer shown during prime time, it’s when states take a minute or two to cite some pretty funky facts before giving the vote total.

This year at the Democratic National Convention, we learned that New York is the birthplace of women’s rights. Rhode Island has the best restaurants. Connecticut is the home of pizza and hamburgers and Utah has the greatest snow on earth. It’s a moment of levity during a serious process.

Instead of watching on television, which is where I’ve always experienced this rituaI, I spent an hour on the convention floor during the roll call. There are several levels of passes at the convention — Inside Chappaqua got one pass that granted us a seat in the nosebleed section, where the speakers are a tiny speck in the distance. But we’re able to trade that seat for a floor pass for an hour, and I used my time Tuesday night during roll call.

The floor — aka the Philadelphia 76ers basketball court — is where you find the delegates. Each state sits together. Some delegates wear crazy hats and shirts adorned with flags; donkeys; red, white and blue glitter; and pithy sayings. There are  lots of buttons and hand-drawn signs.

But the delegates are only a small part of the rowdiness on the convention floor.

Media and security, officials and I don’t even know who else crowd the aisles and sit on stairs. Photographers carrying bulky cameras jostle elbows with reporters using their cell phone cameras. Security continuously shouts “keep moving” and “don’t stand there” to clear a narrow aisle for people to walk. Media interviews are happening every few feet. 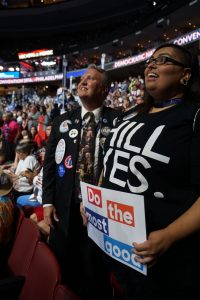 The big media sit in 11 tiers of blue-covered tables off to the side — they have real surfaces with electric outlets.

During the roll call on Tuesday night, reporters tightly clustered in two places. One was near the New York delegation which had the best seats in the house, right in front of the podium. The other was off to the corner, and it took awhile for me to realize they wanted to be close to the Vermont delegation. Rumor was that Bernie Sanders was going to speak last. I caught a glimpse of Andrea Mitchell from NBC news.

Whenever a state’s name was called, that delegation would cheer and the audience would peer around to find their location. After announcing the vote totals, everyone waved their signs and yelled “Hillary” and “Bernie.” Some states got louder applause than others — mainly the large ones with big vote totals.

Not all was joyous. I walked by a furious argument between the delegates of one southern state as they debated which politician got the honor of standing next to the microphone. All politics is local.

As I scanned the crowd, letting the experience sink into my every pore and synapse, I noticed U.S. Senator Cory Booker. He was in the front of the New Jersey delegation, his eyes intently focused on the podium. Every now and then someone whispered to him, or asked to take a photo, and he’d smile and pose. As soon as the interaction ended, he turned to the podium, tilted his head up, and concentrated on the roll call.

There was a childlike look of wonder in his eyes. This was democracy, and he was drinking it in. He loved this and he clearly deeply believed in this process. He didn’t want to miss one one second. Watching his joy intensified my own appreciation of what I was witnessing — the peaceful change of power.

After the hour, I sprinted back to my seat in the rafters. I was sitting next to a friend, someone I had worked with in Vermont. We watched Bernie Sanders, once our U.S. senator, declare Hillary Clinton the Democratic Party nominee. We contained our tears. It was a moment that managed to be both public but acutely personal, too.