If you have not attended NYC Pride, whatever you think it is, you’re wrong.

My day began on the Metro North with three queer teens and a newly minted 11 year-old festooned in flags, tutus, pride Converse and slogan t-shirts. We hit Fifth Avenue in time to procure a decent spot before the parade began.

Why Pride? The LGBTQ community experiences fears and oppression the hetero-normative community does not. We kiss our partners goodbye in public, think little about exposing our relationship and who we are at job interviews or when renting a home, walk into a business and expect to be served if we have greenbacks on hand and doubt our attire, or who holds our hand in public, will bring violence. But not so for those who need Pride.

Heterosexual, cisgender people are the majority. Never forced into a closet, never criminalized and never attacked for being straight or cisgender, we enjoy full rights and privileges with no effort. The LGBTQ community had to fight every step of the way for those same rights, still lacking many. How lovely to be able to ‘marry on Friday and get fired on Monday’ in more than half of the states due to sexual orientation or gender identity.

Pride is satisfaction with qualities attributed to you. But it is also a group of lions forming a social unit. LGBTQ Pride is typically the former, but this year, it was the latter. After Orlando, the community displayed their fierce persona. Ferocious, but protective. There was no silencing them. There is no stopping them. You will not impede their progress. You will not stop them from dancing.

Soon after 49 queer people of color were killed at Pulse, a traditionally safe space, Pride transformed. How? Naturally, increased security. Fewer attendees due to fear? More people as backlash to hate? Parents of LGBT teens were unsure whether their kids should attend their first Pride this year. A friend asked if I was concerned about safety at Pride, and would we still go?

9/11 happened. We returned to the city. As a Jew, still targeted worldwide, we return to synagogue as fish in a barrel. Hours before the Orlando shooting, I left the Philly Trans Health Conference, where security was already tight because transgender people are at risk. I answered, if we don’t show up, who will? Why should anyone? We must.

Parading by, signs urging us to ‘keep dancing 4 orlando,’ ‘control guns, not love,’ ‘I see the world through rainbow colored glasses. check out my view!’ contrasted with 49 marchers dressed in shrouds, each marked with the name and photo of an Orlando massacre victim. There were moments of unbridled joy coupled with sober reality. A reflection of LGBTQ truth.

Participants ran the gamut from New York’s Finest and Bravest to Jewish, Quaker and Mormon groups. From ACT UP and Gays Against Guns to Senator Chuck Schumer and Democratic Presidential Candidate, Hillary Clinton. It was campy pop culture fun with the Orange is the New Black, RuPaul’s Drag Race, reality TV star and activist trans teen, Jazz Jennings, a Pride stormtrooper and the NBA float.

Intersectionality was King. Marchers wore ‘black queer trans lives matter’ t-shirts, senior disabled gays rolled by in wheelchairs, and inclusiveness was the key to the city. If you were marginalized elsewhere, NYC Pride took you in.

Drag queens glittered. Politicians smiled. Activists chanted. The crowd cheered for all. There was not a boo, nor a jeer to be heard, regardless of the politician, nation or religion represented. It was a slice of the American ideal. LGBTQ community, Pride is for you, and there is no greater welcome mat than 5th avenue.

Bring your children to Pride. Surrounded by young people, older folks, families, tourists, Pride crosses class, race, ethnic, nationality and, of course, gender lines. Explain that we accept, not tolerate, differences. No one is excluded. These are New York values.

We must strive for equality for all, every day. Pride is a reminder of what we have to work for. Pride is New York City on its best day.

Bobbi M. Bittker is a stay at home mom and attorney, on the Board of the Bedford Community Theatre, a Girl Scout troop leader and a vocal supporter of Israel, gun safety and LGBT, women’s and civil rights. 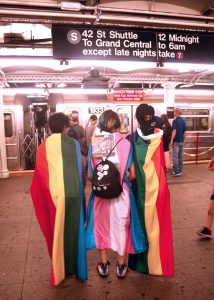 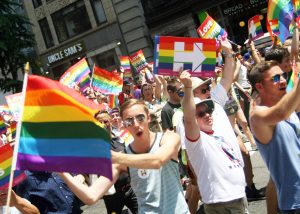 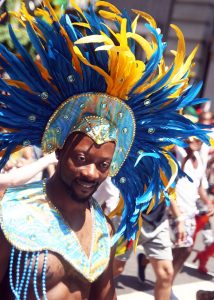