The Holocaust & Human Rights Education Center  (HHREC) of White Plains, NY has entered into a partnership with the Emil A. and Jenny Fish Center for Holocaust and Genocide Studies at Yeshiva University to further promote education programs, events and archived resources for schools and educators.

“We are very excited to be working with the Fish Center at Yeshiva University on this collaboration and partnership” said Millie Jasper, Executive Director at the HHREC. “Their University has taken a very important step in providing education on the Holocaust, and we  look forward to working with them to promote and support their new education program  for our growing community.”

“Holocaust Education, at its core, is character education – which is sorely needed in today’s world”, says Dr. Shay Pilnik, Director of the Fish Center.  “With this new media series, students and adults will learn about leading edge initiatives from countries that were not directly involved in the Holocaust.  We are grateful  for the partnership with Holocaust & Human Rights Education Center.”

The Emil A. and Jenny Fish Center for Holocaust and Genocide Studies strives to build a cadre of teachers, professional and lay leaders across the United States who are committed to Holocaust Education and Remembrance, ready to meet the challenges that the field is facing as survivors of the Holocaust are passing away and awareness of the subject in public memory is fading. Through courses, lectures, conferences, research and more, the Fish Center is dedicated to the study of the Shoah (Holocaust) from a perspective steeped in the history, culture, religion, and spiritual life of the Jewish civilization annihilated by the Nazis and their collaborators. They are also planning lectures, workshops, seminars and communal resources and activities to ensure that the Shoah and other genocides will continue to be remembered and further studied. By leveraging world renowned scholars and offering innovative programming for students and the public, this mission is to ensure that the Holocaust and other genocides are remembered. The Fish Center offers a Master’s degree program in Holocaust and Genocide Studies.

The Holocaust & Human Rights Education Center is a not-for-profit organization based in White Plains New York that serves Westchester, Fairfield and neighboring counties. Their Mission is to enhance the teaching and learning of the lessons of the Holocaust and the right of all people to be treated with dignity and respect. We encourage students to speak up and act against all forms of bigotry and prejudice. Their work with students and teachers helps schools fulfill the New York State mandate that the Holocaust and other human rights abuses be included in their curriculum. Since 1994, they have brought the lessons of the Holocaust, genocide and human rights crimes to over 1,500 teachers, and through them to thousands of middle and high school students. Through their volunteer Educators Program Committee, the Holocaust & Human Rights Education Center gives teachers the unique opportunity to develop programs for themselves and others. These programs not only enrich teachers’ knowledge about the Holocaust and related issues, but they also provide the lens through which to view all other human rights violations.

Guest Speaker Derek Black, Godson of David Duke, to Discuss his Journey Away from a White Nationalist Movement

Thursday, October 29, 7 p.m., from the comfort and safety of your home

Our guest speaker will be Derek Black.  Derek Black is the son of Don Black, the founder of the hate site Stormfront and the godson of David Duke, a former grand wizard of the KKK.  While attending a small liberal arts college in Florida, students discovered a white nationalist living in their midst. They showed him practicing extreme acceptance.  Coming from people he respected, their ideas had real merit to him.  Derek is uniquely smart.  That made him discover the flaws in white nationalism ideology.  He walked away from the white nationalist movement.  Join us and listen to his story. 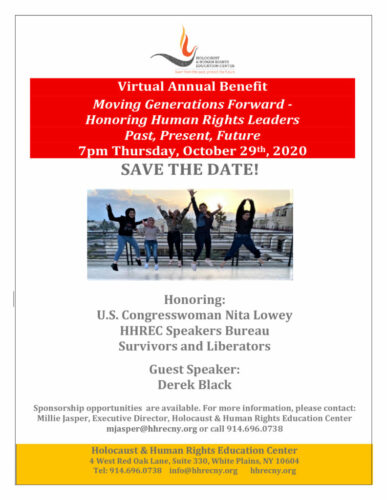 As  I read of children and babies held hostage in cages–as little more than bargaining chips–my dad’s singularly monstrous experiences of separation and loss during the Holocaust have come back to haunt me.

Whether you agree that the Holocaust comparisons to the current day madness are fair or not (I admit that I find the comparisons troublesome sometimes), I think when you read this, you might at least agree there are powerful lessons to be learned and that our despair over the abuse and indignities being inflicted on migrant families and especially to the children at our border is entirely warranted.
When any category of people are treated so callously, and our President lies so brazenly about ‘who created the situation,’  as the situation persists, yes, you damn well better question authority to the max, and do not stop.
To protect helpless children, I do beg you: please lose any moral qualms about assuming the worst.
We know full well that the worst is possible. It is all our jobs now to guard against the worst. The worst, the Holocaust taught us, also comes incrementally.
But I digress because my dad’s story as a victim of rock bottom evil speaks for itself…
After being separated from the rest of his family (all of whom–except for my dad and grandfather–were killed at Auschwitz), my father and Wolf (who was two years younger) had managed to stay alive during the Holocaust after being dragged away for ‘work details,’ i.e.,  slave labor. Together, they suffered and together they survived a series of smaller ‘labor’, i.e., concentration, camps.
Through it all, what meant absolutely the most, what time and again would trigger their survival instinct and help the other through, was that they had each other. They looked out for each other, my dad told me. Being together meant everything.
But then they were sent to Auschwitz, too.
An excerpt (lightly edited) from my Poppy’s memoir.
“The Germans decided to send us to the concentration camp Auschwitz. Arriving there we were greeted by the S.S with the infamous Dr. Mengele. They lined us up and the Dr. was telling us that all injured or too young to do hard work will go to a special location for the injured and children, and will be taken care of.
I had a little suspicion.
He (Mengele) got in front of me, and for some reason, he asked my age.  I said 16, and added that we are very good workers.
My brother (Wolf) said nothing; he was younger than me but taller and a fiery red head.
He (Mengele) told my brother to step forward and told him that he will be better off being with children.
Our (Jewish) camp leader was a 6’ tall guy. He showed the S.S. officer his damaged finger, so he told him to also go with the children and take care of them.
In the meantime my brother came running back asking for half of the bread we still had.
I begged him to stay with me, but he argued I should go with him.
One of the soldiers noticed the commotion and asked what was going on.
I said that I have the whole bread, so he said to break the bread in half and give that to him.
They went one way, and we vent to shower, change our civilian clothing into striped uniform and we all got tattoos injected into our forearms.
My # was 141940 with an upside triangle underneath.
After arriving in the quarters assigned to us, we went outside of our building, meeting people from other buildings, telling them where we came from,
I mentioned that I came here with my brother who was transferred to a camp for children.
He told me to look at the smoke in the background, and said, “That’s were your brother and all the others are, being incinerated…”
In Wolf’s memory, may the gross mistreatment, abuse, and human rights violations of children at America’s border–AMERICA’S border–STOP. We are better than this.
Grace Bennett is Publisher and Editor of the Inside Press.  She has been on the board and advisory board of the Holocaust and Human Rights Education Center since 2007 and is a member of Women’s March for All. Her father (‘Poppy’) Jacob Breitstein is a 96-year old Holocaust survivor.

The Human Rights Institute for Middle School Student Leaders is intended to further the mission of The Holocaust & Human Rights Education Center by laying the foundations to encourage students to become Upstanders rather than bystanders.

Seventh grade students from invited middle schools will be attending our Third Annual Middle School Institute. A keynote presentation establishes the focus of the program: the importance of confronting prejudice and discrimination. Small group workshops examine the two central themes through activities and discussions. Then, students in their own school groups with their teacher meet to develop two activities to use in their school reflecting the themes of Respecting the Individual and How to Be an Upstander.