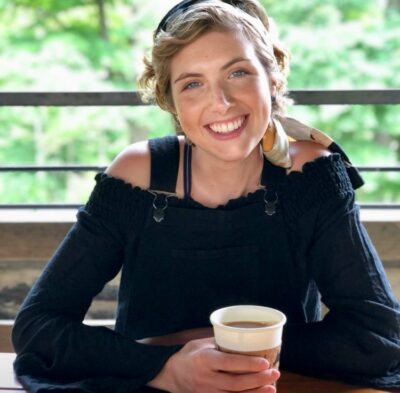 Three cheers for the red, white and blue! This is a town that embodies the patriotic spirit of the country and proudly so. In the weeks preceding Memorial Day, colorful flags wave in the spring breeze, creating an emblematic border on the sidewalks of Chappaqua.

Notes penned by John Phillip Sousa cascade down King Street as marchers follow the cadence, or not, while sauntering down the hill. It’s a glorious day for all, a wonderful opportunity to witness and partake in the portrayal of a caring small town.

There is also a very special something in this parade which boosts attendance tremendously: the presence of one of the town’s most illustrious residents, former Secretary of State Hillary Rodham Clinton. Her allegiance to the event is exemplary. Every year since she has established residence in the hamlet, no matter how far away work takes her, she is here, marching, waving to her fellow townspeople, posing for prized photos.

Often, she is accompanied by former President Bill Clinton, another extremely friendly, famous person. He greets those he has come to know over the years and he seems always happy to meet and chat with new neighbors.

The day begins at the top of King Street, at Victory Corners, the intersection between King Street and Bedford Road, in front of Talbots.  A ceremony is conducted at 10:30 a.m. in front of the war monument.  A wreath is laid and taps are played. The parade begins punctually at 11, a fact proudly related by Parade Marshall James McCauley. 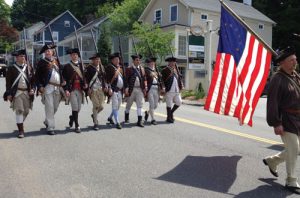 We checked in first with Russell Maitland, Fire Chief of Chappaqua who said that the parade has “grown quite extensively” during his tenure of 33 years. Members (including those as young as 16) of both the Chappaqua Fire Department and the Millwood Fire Department put on their finery and take their places. “It’s a multifaceted event which brings the entire community together on one day,” Maitland said. And yes, the town is assured of fire protection during the parade as well as on every other day. The sirens did sound one year during the event when they were summoned to put out a blaze. Both departments hastened to the scene and the parade immediately resumed.

Another vital service member of the community, the Chappaqua Volunteer Ambulance Corps, also participates. Dressed in uniform, some line up and others drive the vehicles. As for a strict interpretation of formal marching procedures, keeping members in a straight line suffices, Captain Joe Gentilesco related. This sentiment was echoed by many, the day being one for remembrance and joy after all.

For those cheering from the sidelines, it is heartening to hear that the support is truly valued. The rounds of applause resonate as the marchers’ sense of purpose is validated: “It’s different when you actually march in the parade. It’s a different perspective. It’s a real opportunity to see that people do appreciate you,” Gentilesco said.

Months of practice precede the appearance of the Horace Greeley High School symphonic band. Flautist Rebecca Schelling described practicing not only the music, but its execution in motion as well. The band lines up in formation on the track at Greeley and parades around. She related her actual parade day sentiment: “I like the excitement that you feel when you line up with everybody, decked out in their holiday spirit.” Band members wear red, white and blue attire. 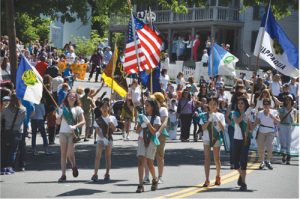 For the Girl Scouts, playing a role in the parade is one of the highlights of the year and one taken very seriously; some march every year. It instills “a sense of respect,” Service Unit Manager of Chappaqua Girl Scouts Lori Townsend observed. “Even the youngest girls recognize the importance of paying tribute.” Each troop makes a banner to carry, adorned with their names. Lining up in age order, they appear in a variety of colorful uniforms. At the closing ceremony, they regard the red, white and blue flowers, designed in a chevron military symbol with pride for they added the white petunias and red begonias to the perennial salvia.

Supervisor Robert Greenstein spoke appreciatively of the bravery demonstrated by veterans and those who have given their lives in service to their country. He spoke fondly of Gabriel “Gabby” Rosenfeld, an active member of the community and purple heart recipient, who passed away on August 6, 2014. During the parade, Rosenfeld always rode in the side car of a motorcycle. “It won’t be the same without him. He was a hallmark of this event,” Greenstein noted.

Regular parade goers have their usual spots along the route (from the top of King Street down to the train station). For Ellen Byck and family, their spot of choice is in front of Bank of America, across from Dunkin’ Donuts. Amid the throngs on the busiest day in town, their friends can always find them.

Byck and her family always look forward to parade day. “We make a conscious effort to be there,” she said. As the daughter of a Korean War veteran, she is particularly concerned with recognizing those who have served: “It’s important to show our support, to actively participate in something that shows our support for veterans and those currently serving,” she noted.

For Parade Marshall Jim McCauley each parade is considered special but there was one particularly poignant moment (cited by several people) that stands out. In 2007, the newly renovated bridge was dedicated in memory of Staff Sergeant Kyu H. Chay, who died in Afghanistan. His parents operate the New Castle Cleaners on King Street.  “The fact that we had one of our own die in combat really brought the meaning home,” McCauley said.

A common observation on the parade is that the event brings the town together. The sidewalks are full of residents and the route is full of proud participants. In addition to the aforementioned, here is but a partial roster of marching groups, most of whom are predicted to take their places again this year: New Castle Police Department escorts, veterans, clergy, Kerry Pipers, school bands, boy scouts, Revolutionary War squad, senior citizens, various community organizations, American Youth Soccer Organization teams and members of the town, school and library boards. At 11:30 am, a concluding ceremony is held at Memorial Plaza, in front of the train station.Veterans are recognized and names are read. Sometimes, the lives of several of New Castle’s fallen are recounted by students who have conducted research on their journeys. A second wreath is laid and taps reverberate. Ambulances and fire trucks stand at the ready. Lucky youngsters climb aboard.

McCauley wears his Green Beret and military uniform as he leads the parade. “Having served myself and having lost many colleagues, it’s a personal way of remembering those who have given their all and those who serve now.”

The parade strikes the right balance between reverence and revelry. There are many moments of solemnity, tears are shed. American values are proudly displayed and the rights of all people defended. Smiles abound and the sound of patriotic music wafts through the air.

So come on down, grab your flag or pick one up as they are distributed. Here’s a chance to show your support for your country and the hamlet.

Sarah Ellen Rindsberg’s prized memory of the parade is that of watching her own children march when they were young.