The Great Chappaqua Bake Sale, a delicious annual tradition since 2010, has announced that incoming Horace Greeley freshmen Rebecca Blum, 13, and Charlotte and Sophia Spiegel, both 14, will take over leadership roles in 2018.

“We’ve all been involved since the very beginning,” said Rebecca. “It’s a very rewarding feeling to know that we are making a difference in so many kids’ lives.” Since its inception in 2010, the bake sale has raised $146,000 for the No Kid Hungry program of Share Our Strength, which is a leading national organization dedicated to fighting childhood hunger. The Chappaqua sale has also received $50,000 in matching donations from Domino Sugar, making the total raised for the organization almost $200,000.

Founded by Chappaqua residents Holly Blum, Allison Spiegel and Jessica Reinmann, the Great Chappaqua Bake Sale has always had a two-fold mission: to raise money for kids in need, and to impart social responsibility to the organizers’ own children and the community at large.

“We started The Great Chappaqua Bake Sale as a way to teach our kids the true meaning of charity,” said Blum. “As our daughters have grown up with the bake sale in their lives, they’ve been taking on more and more responsibility each year.”

Share Our Strength and the Bake Sale for No Kid Hungry program were always the driving force behind the Chappaqua effort, noted Blum. The program encourages local communities to host bake sales to support the organization’s mission of ending childhood hunger. After hearing about the program from an infomercial, the founders contacted the organization.

“After learning some very sobering statistics about childhood hunger, such as how one in six children face hunger in this country, we were more determined than ever” to start our Chappaqua version, said Spiegel. “Over the past eight years, we’ve seen the incredible impact No Kid Hungry has had on the childhood hunger crisis in America.”

The bake sale serves as a concrete reminder for the kids that not all children are lucky enough to be able to grab a treat when they are hungry; so many kids do not have that privilege.

“We started this endeavor to show our children what charity is all about,” said Spiegel. “Yes, it’s wonderful to donate money to good causes, but getting involved and creating something bigger than yourself to help others is so rewarding.”

While Rebecca, Charlotte and Sophia have always been involved with the event, 2018 will mark the first year they are truly in charge.

“Holly and I are working closely with them this year to show them the ins and outs of leading such a large-scale event,” said Spiegel.  “They are learning the ropes quickly and have already come up with some great ideas.”

The girls are particularly excited about getting more kids involved, and spreading the word that philanthropy is an important activity.

“Trying to get other teens involved is a huge goal for us,” said Sophia. “If we can do this with only three of us, imagine if 1,000 teens get involved.” To that end, they have also started a new social media campaign, with Facebook and Instagram accounts for the bake sale.

“Every Friday we post ‘Hunger Fact Friday’ on our Instagram feed so kids get a real-world picture of what’s going on” said Charlotte. “So far, we have 150 followers and we are definitely aiming for more!” The girls have also been busy soliciting raffle prizes, organizing bakers, and scheduling volunteers for the day of the event.

The Great Chappaqua Bake Sale has been hosted in conjunction with the Chappaqua Children’s Book Festival since 2012, when the festival organizers asked the Bake Sale to be its exclusive dessert providers.

“We were thrilled at the possibility of reaching exponentially more people,” says Blum. In the past, the sale has attracted thousands of visitors. In order to supply enough baked goods, the organizers recruit between 80 and 100 individual volunteer bakers, plus local businesses, to make and donate the treats.

“One of the best things about the bake sale has been the ongoing support from Chappaqua and from all our surrounding communities,” said Blum. “So many businesses and individuals volunteer their time, donate goods and services to our raffle, and support the event year after year. Our goal is to continue to nourish this community support and have our kids uncover new ways of bringing the community together.”

“It’s always such a special day for our town and a great way to celebrate children,” added Spiegel.

The Great Chappaqua Bake Sale will take place at the Children’s Book Festival in Chappaqua on September 29 from 10 a.m. to 4 p.m.

Inside Chappaqua asked Rebecca, Sophia and Charlotte to share a favorite recipe. Here’s one for peanut butter balls, which are so popular they often sell out!

Mix the first five ingredients together in a bowl. Shape them into 1 inch round balls. Coat with graham cracker crumbs. Let chill in the refrigerator for at least 1/2 hour.

On this beautiful and earliest of fall mornings…and one day before the second annual Chappaqua Children’s Book Festival, I’m feeling a sense of awe.  So I thought I’d share those simple but awfully handy W words  uppermost on my mind: Wow and Woo hoo to all that’s planned and the steadfast vision of Dawn Evans Greenberg and her team of talented Wizards and elves. Mother Nature is reportedly offering an enthusiastic nod of approval too– even reportedly granting us all a little Indian Summer to make the most of all the festivities, so we can leave fall jackets behind and pretend for a day that the spectacular summer of 2014 is simply continuing. Thanks, Mom!

There’s something for everyone tomorrow.  So whether you step out solo, with your significant other, or with your family, to enjoy the second annual Chappaqua Children’s Book Festival, the ongoing Chappaqua Farmer’s Market, the 5th annual Great Chappaqua Bake Sale committed to  ensuring that No Kids go Hungry, or shop some (or a lot) at a downtown Sidewalk Sale,  or are simply hoping for a first time (or 10th time) glimpse of “Where the Characters Are,”  Sophie Mendelson’s stunning mural on Greeley Ave, know this too:

We are not without our challenges, but the truth is we  live in a town with nationally ranked schools, gorgeous hills and parks, diverse homes,  and an array of downtown merchants who work so hard to enhance its storybook flavor as well.  And with exemplary neighbors too who just happen to be awfully adept at creating one best selling, fairy tale of a time. There’s a giant, floating message in the sky floating over Chappaqua tomorrow, and to all the residents who partake, and to all Westchesterites “and beyond” who plan to visit: Welcome and Enjoy. 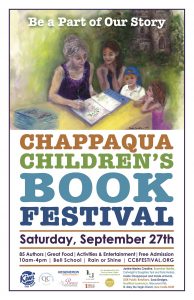 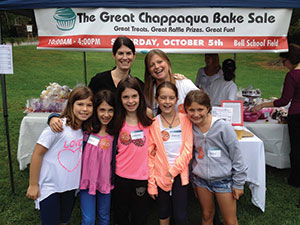 Having raised more than $50,000 for Share Our Strength’s No Kid Hungry campaign, The Great Chappaqua Bake Sale (GCBS) is celebrating its 5th anniversary raising money to fight childhood hunger on Saturday, September 27, at the Chappaqua Children’s Book Festival. In honor of Year Five, the GCBS will kick off a week-long promotion, ‘Share Our Fight with Five’ with local business partners that have supported the bake sale since it began in 2010.

The new ‘Share Our Fight with 5’ promotion will spotlight several devoted business partners that will offer customers a special GCBS promotional item and donate 5% of the proceeds from the sale of that item to GCBS. The promotion will begin on Saturday, September 20.

The GCBS and raffle “have been a huge success thanks to the generous support of the local business community, which donates baked goods, products and services year after year to support this cause,” says Holly Blum, Jessica Reinmann and Allison Spiegel, the GCBS co-chairs. The GCBS Bake Sale Raffle and tickets will be available for purchase online beginning in early September and at the children’s book festival on September 27 from 10 a.m. to 4 p.m. at the Bell School. This year’s raffle includes prize packages donated by 75 businesses and counting and is valued currently at more than $15,000.

Money raised from the GCBS funds meals programs in New York State. In New York, 22% of kids struggle with hunger. Since 2011, the No Kid Hungry network has helped bring more than 34 million additional meals to kids who need them–including 1.1 million additional meals in New York. The campaign is focused on expanding access to school breakfast and free summer meals and has also empowered more than 10,000 New York families with the skills, knowledge and confidence to prepare healthy, affordable meals through the Cooking Matters program.