Westchester County Executive George Latimer today announced a $10 million funding initiative to support small businesses and nonprofits facing challenges due to COVID-19. Westchester County Business FIRST: Financial Investments for Recovery and a Sustainable Tomorrow is a new grant program designed to offer immediate financial relief to organizations in Westchester County that have been negatively impacted by the pandemic.

“We are at a critical point in Westchester County’s history – and such times call for leadership and innovation,” said Latimer. “The Westchester County Business FIRST Program will provide urgent financial assistance to businesses and nonprofits now, and set the foundation to rebuild our economy as we work toward a sustainable future.”

The Westchester County Business FIRST Program is being administered by the County Office of Economic Development through the federal Coronavirus Aid, Relief, and Economic Security (CARES) Act. The Program is open to businesses and nonprofits that employ 99 or fewer people and whose primary business location is in Westchester County. Eligible business and nonprofits can apply for grants of up to $49,000.

Applications will be accepted from September 21 through September 30, 2020 at https://westchestercatalyst.com/business-FIRST-programs/

“These are difficult times, but as ‘The Catalyst’ for economic growth and vitality, the Office of Economic Development is here to support County businesses and nonprofits,” said Bridget Gibbons, Westchester County’s Director of Economic Development. “These organizations help fuel our economy and provide quality jobs in our communities. This funding is designed to help them recover and get back to business.”

To be eligible, organizations must be in good standing with Westchester County and are required to demonstrate revenue losses of at least 25% from March 7, 2020 to present due to the COVID-19 pandemic. The applicant must establish that the organization was a financially viable operation prior to March 7, 2020, the date Governor Andrew Cuomo signed Executive Order 202 declaring a disaster emergency. The organization must have been open as of Feb. 1, 2020, currently be in operation, or closed temporarily and plan to reopen for business in 2020.

Business Council of Westchester President/CEO Dr. Marsha Gordon said: “The Business Council of Westchester (BCW) is extremely supportive of this program and applauds the leadership of County Executive George Latimer and Director of Economic Development, Bridget Gibbons in developing this initiative for small business and not-for-profits in Westchester.  These sectors have been especially hard hit and desperately need these financial resources to survive.  The County is also analyzing which sectors have been hardest hit, so that these resources can be deployed most effectively. It will be important to make sure that all businesses are aware of this opportunity , so outreach via business organizations, community- based organizations and churches will also be important, as well as outreach in different languages to ensure that as many as possible are aware. The BCW will certainly work to share with our outreach to our over 1000 members and robust database of County businesses and not for profits as well as through social media.  This is a ray of hope for those organizations struggling to stay alive.”

Westchester County Association President & CEO Michael N. Romita said: “So many of Westchester’s businesses and non-profits suffered significant economic hardship as a result of the pandemic crisis.  As our local economy begins to transition from reopening to recovery, programs like Westchester County’s Business FIRST initiative will go a long way towards helping businesses regain their economic footing.  We applaud the County Executive and his economic development team for its innovative use of CARES Act funds and look forward to helping spread the word to eligible organizations.”

Nonprofit Westchester Executive Director Jan Fisher said: “Nonprofit Westchester is grateful for our partnership with Westchester County Government during these unprecedented times. We thank the County Executive and his team for this grant opportunity, and for ensuring that there are county resources available to support nonprofit organizations as they continue to provide essential services to Westchester’s most vulnerable residents.”

Certain entities are not eligible to apply for Westchester County Business FIRST grant, including units of government; real estate holding companies, businesses or nonprofits that generate revenue through passive real estate; adult entertainment establishments; gas stations; and businesses or nonprofits that have defaulted on federal debt, including loans from the Small Business Administration.

For more information on the application process, visit https://westchestercatalyst.com/business-FIRST-programs/

News Courtesy of the Office of the Westchester County Executive 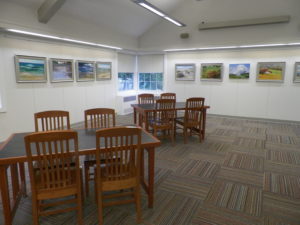 The North Castle Public Library has been awarded a $135,000 grant for building improvements to its main branch in Armonk. The grant, part of $24 million in capital funds set aside for public library construction and other infrastructure projects in the 2017–2018 state budget, was announced in August by State Assemblyman David Buchwald (D-Westchester) and State Senator Shelley Mayer (D-Westchester).

The North Castle Library “has put forward innovative plans for improving the infrastructure of their library building,” said Assemblyman Buchwald. “It has been very proactive in making sure they are a 21st century institution.” Buchwald noted that while many libraries apply for grants, the process is very competitive, and not all libraries that apply receive funding. The North Castle library, he said, has successfully positioned itself as an innovator in library spaces and programs.

Additionally, the grants require matching funds from local supporters. “New York State has an interest in supporting libraries where the local community has been part of supporting its library as well; this ensures both state and local dollars go further,” he said.

The grants allow libraries to “expand the critical services they provide for the community,” said State Senator Mayer. “They are centerpieces of our communities in Westchester and throughout the state providing programming for children, seniors, and families.»

Sean Ryan, president of the North Castle Public Library Board, said the funds have been put toward an improvement initiative that was established in 2013 and implemented in 2014. At that time, the library trustees assessed the needs of the community, and put together a wish list of improvement projects totaling more than $1.5 million. This is the fifth grant the library has received from the state, and according to Ryan, the library’s current ‘to do’ list has projects extending into 2020 for both its main Armonk branch and satellite North White Plains branch.

Ryan noted that infrastructure improvements were critical for libraries to maintain the type of programming that is relevant in today’s fast-paced world of new media.

“Libraries are reinventing themselves,” he said. “Just ten years ago they were books on shelves. Now, they are social centers for educational and cultural activities.”

“The North Castle Public Library is thrilled to receive this library construction grant which enables us to renovate spaces dedicated to support our library’s programs for children, young adults and adults,” he added. This support “allows libraries to transform to meet current and future needs of our patrons.”

The North Castle Public Library has seen a dramatic increase in attendance since the improvement projects began. Last year, more than 163,000 people visited the library, and more than 35,000 attended its programs, which is twice as many as attendees recorded in 2012. The library currently runs more than 2,000 programs a year, and ranks third in the county for program participants.

The most recent grant has already been put to good use. A Friends’ Gallery, which will be used for adult programming and as a gallery space, has already been completed. In June, the room was dedicated to the Friends of the North Castle Public Library in appreciation for their contributions to the library. The gallery’s first exhibit featured a historical retrospective of the group, who in 1961 established the Armonk Outdoor Art Show as a way to raise funds for the library. The exhibit chronicled how the show, originally held in a small churchyard, grew to more than 185 artists from around the world. Other gallery shows will feature the artists Natalya Aikens and Doris Mady, woven and pottery art, and local photographers.

The grant also covers the creation of a New Young Adult room that will provide more space for teens to use the library facilities, and a new café offering drinks, light snacks, and a relaxing environment for everyone in the community. The final project covered by this grant is the expansion of the children’s room, where 600 square feet of dedicated program space will be added.

For more information on upcoming programs and exhibits, visit www.northcastlelibrary.org.