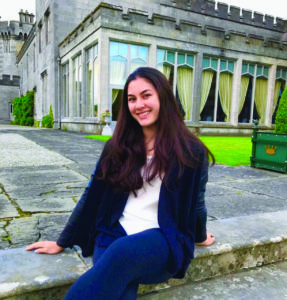 I’ve been a member of Greeley’s Student Council since my freshman year. While the unequal male to female ratio was apparent, it had never held me back during meetings, or from taking initiative. I organized events, brought in school speakers, and was elected Vice President last year. Sure, this disproportion was evident–but it was not until this year, when I wanted to run for President, that I finally felt what many women in leadership endure–discouragement and disappointment due to the lack of past female leaders to look up to, and supportively engage with. Although I knew the ropes, and had confidence in my qualifications for the position, I struggled to find the inner strength to put myself in an arena where only two females had ever succeeded.

In those moments of self-doubt and apprehension, I especially admired the perseverance of Chappaqua’s own Hillary Clinton –and the many other women taking risks in leadership. The lack of female examples to follow in this field can pose a disadvantage to women leaning in, on local and global scales. According to the Pew Research Center, “There are 15 female world leaders currently in office, eight of whom are their country’s first woman in power…these women still represent fewer than 10% of 193 United Nations’ member states.”

At Greeley, many girls have campaigned in the past–fulfilling aspects of the election process including interviewing for the position, making posters, and giving a school wide speech. While it’s certainly an imperfect process, I was still shocked when Assistant Principal Mr. Hosier informed me that despite the efforts and qualifications of so many girls, the last female President was elected in 1999.

With a greater sense of unity, I have faith that Greeley can cultivate a stronger community going forward…ready to make change.

Having experienced what it’s like to be a female in the leadership arena, I possess a greater sense of urgency to advocate and highlight girls pursuing fields where they too are the minority. In particular, I’d like to focus on the promotion of girls in STEM (science, technology, engineering and math). According to the U.S. Department of Commerce, women fill almost half of all jobs in the U.S. economy, yet hold less than 25% of STEM jobs. This underrepresentation and untapped opportunity for girls passionate about STEM is tangible unfortunately here in Chappaqua–and it’s a reality I’ve seen and experienced firsthand.

I’ve pursued my passion for STEM in classes at Greeley–and have faced this gender disproportion each time. As a sophomore,

I walked into my Robotics and Java Programming classes to find myself only one out of three female students. This year, in Tech and Design, I was the only girl–and in my engineering class, the lack of female students was also prominent. Until those moments, when I was singled out as a girl before I even began to participate, I had never viewed the classroom as a place that demanded personal courage. I thought twice about raising my hand, even when I knew I was right. Self-doubt crept into my mind, as I began to question my skills and abilities even through success. In STEM and in leadership, I have faced the uncomfortable reality of the gender gap–but these experiences have ultimately left me determined to act. I think it’d be inspiring and informative to raise awareness of the apparent gender gap here in Chappaqua, and to have a component of the annual STEM Fest at Bell to promote girls’ participation and interest in the field.

While modern day politics can sometimes seem anything but respectful, encouraging, or engaging, the level of professionalism that this year’s Student Council election possessed left me with a great sense of hope. In fact, more than 600 students voted, Greeley’s highest voter turnout in years. This sense of student engagement is something I hope to expand–not just in the sphere of elections, but throughout Greeley’s hallways, classrooms, and spirit. While school is where it begins, spirit, strength, and connection shouldn’t disappear when the bell rings at 2:35 p.m. With a greater sense of unity, I have faith that Greeley can cultivate a stronger community going forward–a community of engaged students and active leaders, unafraid to break glass ceilings, and ready to make change.

Hannah Fenlon is a senior at Horace Greeley High School and only the third female student body President.